It's not a secret: there is a serious disconnect in Poland between the new national government in Warsaw and some local governments, especially some big city governments thinking independently and with traditions of freedom and solidarity. Gdansk is such a city and a place where the independent Polish Constitutional Court celebrated its 30th anniversary.

Therefore, when the central authorities push to diminish and gradually liquidate the constitutional tribunal - a great achievement of democratic movement in Poland in late 80-ties, we - the strong local governments, step in to save the court. Several months ago, when it became clear, that the new government in Poland is not willing to celebrate Constitutional Tribunal anniversary - which has been an established tradition - I invited the Tribunal to Gdansk - a city of freedom and solidarity.

Gdansk defends democracy We made the news again yesterday. Gdansk again emerged as a big European actor, this time with the participation of prof. Koen Lenaerts, President of the Court of Justice of the European Union, and Gianni Buquicchio, President of the Venice Commission. These distinguished guests and their Polish colleagues celebrated in Gdansk 30 years of the free and independent Polish Constitutional Court. It was a strong European support for defending values of democracy and rule of law. 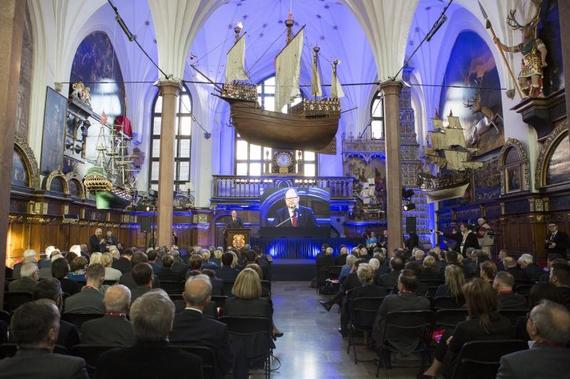 The Arthur's Court was very crowded yesterday. People showed up to support the rule of law and democracy in Poland. Photo: J. Pinkas

- The role of constitutional courts is particularly important at a time when parliaments sit clear majority - said Mr. Buquicchio. - Therefore, the composition of such courts must be balanced, and judges may not represent any political party.

The Tribunal's president, professor Andrzej Rzeplinski, emphasized his gratitude to Gdansk for the invitation and our effort to organize an event that is an obligation and an opportunity to share with the public and judges some reflections of the Court. It is the body established to uphold respect for the Constitution, said prof. Rzeplinski. He stressed that Poland speaks about the tripartite division of power: the judiciary, legislative and executive, and frequently forgets about its strong and efficient local government. 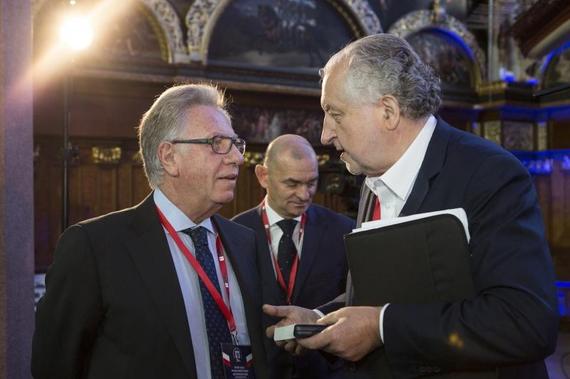 I'm proud we had such guests in Gdansk yesterday. From the left: Gianni Buquicchio, President of the Venice Commission talking with Andrzej Rzeplinski, President of the Constitutional Court in Poland. Photo: J. Pinkas

Poland's local government is our tremendous legal and organizational success of the recent decades. Important decisions are made for the people where they live, not necessarily in Warsaw, said prof. Rzeplinski.

The Constitutional Tribunal is a constitutional body. It is not a private institution. And the local government is part of the public administration. If the central government is paralyzed and does not work well, its second part, i.e. the local government, takes over. I also recalled that in Gdansk, Solidarity was born, and on October 7, 1981, the program of self-governing Republic of Poland was proclaimed. In it there was a strong demand for the appointment of Constitutional Tribunal as well as a demand for an independent judiciary and an independent prosecutor's office. It's a shame and a disgrace to hear that now the new government in Warsaw wants to forget about it and demolish the institution.

Democracy is not a system struggle of all against all, but cooperation, stressed Malgorzata Gersdorf, President of the Supreme Court. - The source of law should be in a democracy, human dignity, and not in revenge. In the modern world the role of the judiciary is growing, because globalization brings with it new challenges. Meanwhile, the situation in which the legislature wants to influence the judiciary threatens the basic rights of citizenship.

Looking back at yesterday I am happy to know that local governments are still strong and able to stand up to any possible attempts to destroy our very young democracy.