In July 2015 the annual OutWrite Book Festival was hosted in Washington, DC. OutWrite provides a space for LGBTQ people from across the country to gather to support diverse books and connect with other writers, panelists and journalists in a public forum. Amongst the attendees were Lisa Moore, Ebone Bell and James Earl Hardy. Upon the conclusion of the OutWrite Book festival, I was struck by the eagerness of the gay men to wrap up in time for a meeting they called, ManDate. Men from all over the country were not only familiar with Mandate, but had made it a priority to leave OutWrite in enough time to attend the event that evening.

ManDate enjoys no fanfare, no budget for advertising and no popular press coverage, however it has been successfully operating and serving the needs of gay Black men since its inception in 2010. In Washington, DC, ManDate has served upwards of 700 gay male attendees in one session, according to ManDate co-founder Jabari Bruton-Barrett. There is no question that in Washington, DC, ManDate is a staple for gay Black men and the program is quickly gaining national recognition. ManDate is now piloting in Norfolk, VA, Richmond, VA, North Carolina, South Carolina, Atlanta, GA and Jackson, MS.

This year, ManDate will host its 4th annual Health and Wellness Conference for Black gay men during the weekend of November 6-8, 2015 in Washington, DC at the Human Rights Campaign (1640 Rhode Island Ave. NW, DC). This year's theme is "I Am, We Are" which celebrates Black gay men individually and as a community, in all aspects of their identity. The conference will bring together over 200 Black gay men for a weekend of learning and provocative discussion on topics such as HIV/AIDS, biomedical interventions, sexual health, general health, mental health, spirituality/faith, relationships, finance, community mobilization and integrating generations. Free on-site HIV and STI screenings will also be offered to conference attendees.

Project Healthy Livings "ManDate" Health and Wellness Conference is the only holistic health focused conference in the District of Columbia that is specifically designed for and by Black gay men, says ManDate co-founder Jabari Bruton-Barrett. This year, some of the conference sponsors include, the District of Columbia Department of Health, Gilead Sciences, Whitman Walker Health and AIDS Healthcare Foundation.

The annual conference is a culmination of the monthly Mandate sessions that happen in Washington, DC and several southern states, throughout the year. According to co-founder Jabari Bruton-Barrett, "In 2010 the National Alliance of State & Territorial AIDS Directors (NASTAD) charged southern jurisdictional Health Departments with developing initiatives for Black gay men." In an effort to address and combat some of the psychosocial and environmental challenges that Black gay men face, Project Healthy Living (PHL) adopted a holistic approach through the creation of the "ManDate" initiative that aims to improve sexual health outcomes and influence healthy life choices for Black gay men through interventions that aim for risk reduction.

The year ManDate launched, marks the same year that President Obama first released The National HIV/AIDS Strategy which identified a set of priorities and strategic action steps tied to measurable outcomes for moving the Nation forward in addressing the domestic HIV epidemic. In July 2015, the White House released the National HIV/AIDS Strategy for the United States: Updated to 2020. According to The Advocate, we have an administration that has done more to address the domestic HIV epidemic than all previous administrations combined, including a sharp increase in HIV programs, interventions and research targeting gay men in general and black gay men in particular. The updated National HIV/AIDS Strategy lays out specific targets for gay men and Black gay men, and the White House official presiding over these activities is a Black gay man living with HIV, Douglas Brooks. ManDate is not only an exemplary initiative that parallels the Obama administrations focus on Black gay men, but also it is an organic enterprise that provides a multidimensional approach and support system for Black gay men.

In 2010 when the National Alliance of State & Territorial AIDS Directors (NASTAD) made a concerted effort to address the concerns of the Black gay community, no one would have predicted the success of the ManDate monthly sessions. ManDate fills a void within and across the Black gay community. That void is access to a safe space to share and discuss a myriad of concerns on a consistent basis, whilst allowing for social networking opportunities across a diversity of men. Co-founder, Jabari Bruton-Barrett says,"25 percent of attendees are ages 18-30, 70 percent are ages 31-61 and 5 percent are ages 62+. Our typical attendee is single, college educated and early to mid 30s. Median household income is $25K-$65K annually."

What makes ManDate monthly sessions so valuable in Washington, DC is not only that it is a grassroots initiative held at the private home of its co-founders, but the focused topics discussed each month are participant driven, staying true to focusing on what the community needs at any given session. Jabari Bruton-Barrett says,"The monthly ManDate meetings are facilitated by our core facilitators. Sessions can be topic driven or open ended discussions. We use data from our evaluation findings to determine topics of interest. Once we agree on the topic, we bring in an expert to lead the discussion with the group. The subject matter expert will co-facilitate the session with our core facilitators." The session topics are truly multidimensional, ranging from mental health to financial/estate planning to sexual anatomy to police violence and everything in between. 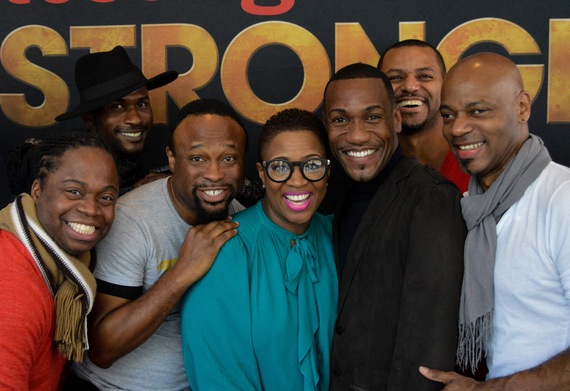 ManDate is a phenomenal example of both national focus placed on complex social and health issues and grassroots initiatives maintained and operated by everyday individuals seeking to make a difference.