Which is better, voter guides or sliced bread?

Please drop whatever you're doing right now (you're reading my article so technically you're all mine for the next 60 seconds). We're going to swing an election together. Somewhere in the country. Right now. Click on TheBallot.org. Find a local progressive voter guide for your town, and share it with everyone you know. Right now.

Ok... GOOD JOB! We just helped swing an election together, somewhere in the country. 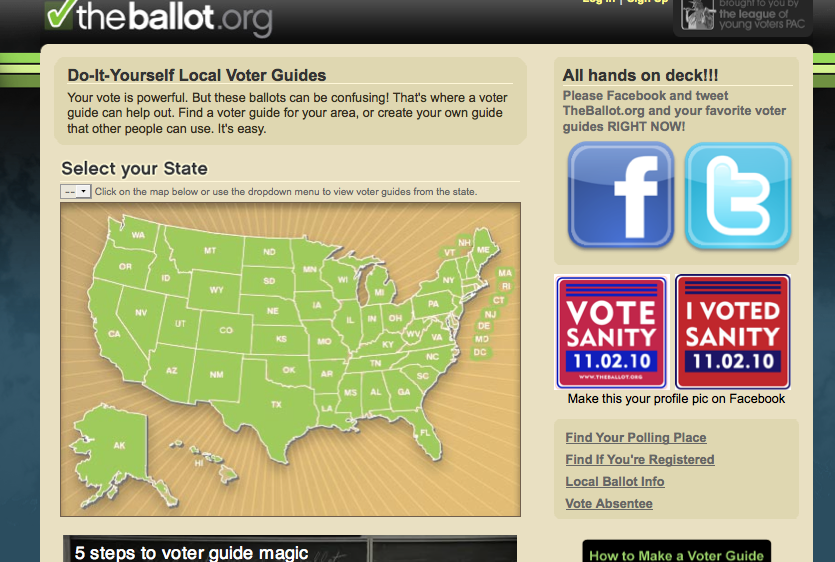 This handy new tool TheBallot.org has aggregated more than 350 local progressive and non-partisan voter guides. Some were created by well-known progressive groups like Sierra Club and SEIU, but a lot of the best ones were created by individuals or small informal groups. It's not too late to make your own.

Our short-term goal is to get tens of thousands more 2008 Obama voters to come out, cast informed votes this Tuesday, and get their friends to do the same.

The truth is that most of us have no freaking clue what is on our ballots -- especially down ballot stuff (judges, county assessors, local ballot measures, etc). Honestly, it's intimidating, even for me. But Local Voter guides don't just help with down ballot. The act of creating, reading, and sharing local voter guides makes us knowledgeable, confident, and empowered to share the guides with our friends and talk to them about what's on the ballot, and the importance of voting on TUESDAY.

It's amazing: As individuals armed with homemade voter guides, we can have the same impact as a powerful interest group or a newspaper editorial board -- the power to influence and turn-out hundreds and thousands of new votes.

The reason why I'm so passionate about home-made local voter guides isn't just about Tuesday's election. It's the start of a 21st Century model of how we can build an empowered hyper-local progressive political movement from the ground up.

AND it's about helping win and swing as many elections as possible on Tuesday -- at all levels.

We are in for some real nail-biters, folks.

For the Love of God, It's time to pull out all the stops!

We can be the margin of victory in squeaky close elections. Remember:

As Karl Rove reminds us, the 2006 mid-term election -- the sweeping Democratic victory, which gave Dems control of both Chambers of Congress-- was decided by only 10,000 votes in the Senate (in two states) and less than 80,000 votes in the House (spread across 14 districts). Several House races were decided by less than 1000 votes.

30 Million of the 69 Million Obama 2008 voters will NOT vote again in 2010 --unless we personally remind them. If just 10% more than the expected number of 2008 Obama voters vote again, we would crush the Tea Party from coast to coast.

I bet you have at least 20 friends in your phone and Facebook right now who are totally down vote on Tuesday --but they need you to personally remind them.

Please call them right now. There are moments in history where we need to DROP EVERYTHING. We can NOT let the Tea Party win. Please start Facebooking, Tweeting, Blogging, Calling, Knocking Doors like crazy: TheBallot.org

We can DO this! 32 Hours left until the polls close. It's Progressive Comeback Time!