NEW YORK -- What is the actual extent of the city? As megacities, sprawl and megalopolitan regions increasingly characterize urbanization, it gets harder and harder to recognize either the location or the logic of boundaries. But, while our cities are no longer walled, each is still enclosed in multiple visible and invisible membranes that define it both internally and in relation to the planet.

Cities have always been understood in terms of supporting "sheds" -- watersheds, food sheds, energy sheds, knowledge sheds, population sheds -- but as modern cities have grown, their edges become ever more elastic and discontinuous. Where once food came from the periphery and varied with the seasons, a trip to the supermarket now offers products that -- in defiance of time and space -- arrive from every corner of the globe: the average grocery cart contains items that have travelled thousands of "food miles."

This can result in huge environmental costs and a food chain dominated by predatory multinational companies, not to mention rock-hard, genetically modified produce, armored to travel. Ours is increasingly an age of great sameness. we

"The glory of great cities rests in their individuality."

But the glory of great cities rests in their individuality. Whether economic, social, morphological, political, environmental, racial or cultural, a legible sense of edge is crucial to the singularity -- the difference -- of cities. As the historic forces that made Prague, Fez, Suzhou or Quito unique become more and more winnowed, cities are hollowed out of the authenticities that shaped them, of their genius loci, of their special spirit of place.

Cities today must urgently struggle to preserve and enlarge the logics of their own locality, to deepen strategies of cooperation and invention that both retain and achieve the unique qualities that have historically emerged from the interaction of bio-climate, culture and sociability. I worry about this not simply when seeing sterile and identical architectures and commerce everywhere, but when ordering a drink in Logan airport (through which I've been commuting this semester in my role as model multi-national academic) from a favorite bartender with a profound -- and endangered -- North Boston accent.

Ironically, in this era of exponential urban growth, we are witnessing the disappearance of cities. As the crust of generic "city-ness" spreads over the globe and as the dominance of neo-liberalist economic and cultural control accelerates, our urbanism becomes increasingly generic -- a Starbucks on every corner and an iPhone in every palm. More and more, we understand and produce cities as nodes on a global system, not as singularities.

"Ironically, in this era of exponential growth, we are witnessing the disappearance of cities."

Such cities seal themselves against climate and environment, over-identify historic urban culture as simply copying old forms and forget the great project of cities as places of self-regulation and expression. These "modern" places are environmentally degraded, fake and hostile to the rights of both individuals and communities.

The argument for a reinvigorated idea of "the local" does not grow simply from nostalgia, but from a complex that includes the exercise of rights, the freedom of creativity, the possibilities for cementing the community and taking responsibility for our impact on our beleaguered planet. Cities, rightly planned and managed, are a critical part of the solution to our environmental crisis, a crisis that urban slums, pollution and failing systems of social and physical infrastructure emblematize. Mass transit, walkable and complete neighborhoods, local production of food and goods and a sensitive and reciprocal exchange between form and place offer great hope for both the environment and for the dynamism, comfort and relevance of place. Cities can be enormously efficient if properly planned and lived.

At Terreform, our urban research center, we've spent almost a decade engaged in a thought experiment, largely focused on New York. We asked: What are the limits of the city's capacity for self-sufficiency in the basic components of its respiration -- food, air, water, climate, manufacture, construction, waste, movement, etc. -- and how will New York (and other cities) evolve should they devote themselves to taking direct responsibility for their planetary impacts?

While such fantasies of autarky have a long -- and sometimes troubled -- history, the idea of self-reliance offers a dramatic test not simply of will but of technology, morphology and community. As national governments demonstrate ever higher levels of indifference and incompetence in addressing our shared crisis, it becomes ever more critical that responsibility devolve to both localities and individuals, especially those who are the biggest consumers and polluters: us.

"Cities, rightly planned and managed, are a critical part of the solution to our environmental crisis."

Relying on a model of import substitution (another vexed concept, although one beloved of Jane Jacobs, still our most influential urbanist), we've studied the marginal possibility of the city increasingly fending for itself by, in effect, reducing its ecological footprint to the dimensions of its political boundaries.

Our motives are treble:

First, to really see how far a dense city like New York can go in providing for its needs. Second, to compile an encyclopedia of forms and technologies that might be deployed in any city that's interested in taking increased responsibility for its role in the global environment, and to look into the new and singular morphologies that might emerge in response to the particulars of place. And finally, to assert that highly autonomous cities are a key bulwark in cultivating democracy, security, identity and happiness for their inhabitants. Cities that are too big cannot be well governed. And cities too dependent lack the dynamism of invention and exchange that must secure their futures as living things. 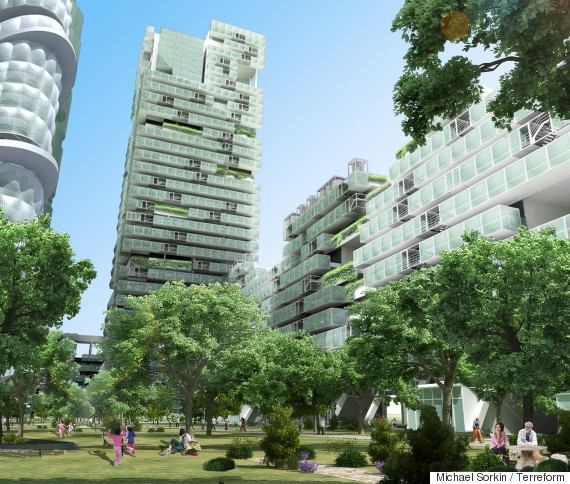 A new kind of city block in which a green interior provides both public and agricultural space (a vertical farm is depicted at left).

We began our investigation with food. This struck us as a good point of departure because of both its centrality and its improbability. New York City is obsessed with food and the diversity and depth of our cuisine is surely one of our global signatures. But our culinary preoccupations extend beyond simply what we eat to questions of how it's produced, distributed, prepared and shared. In recent years, we've seen a proliferation of rooftop greenhouses, food co-ops, community supported agriculture and attention to inequalities of nutrition. One of the manifestations of our divided city is the food desert -- the large areas in which fresh (nevermind organic) produce is hard to find and in which fast food dominates diets. And our anxieties about agri-business, hygiene, vanishing “slowness,” waste and other social, environmental and political aspects of the food system are second to none.

We strongly favor ideas of localism and this extends not simply to the city as a whole, but also to an urban structure based on strong and "complete" neighborhoods. For us this means that a good neighborhood should provide all the necessities of everyday life -- employment, commerce, culture, recreation, education, etc. -- within easy walking distance of home. This means that the mix of local uses will be refined and augmented and that the variety of people will also be broad. After all, if both the banker and the barista (and the farmer!) walk to work, their housing needs will have to be satisfied within the neighborhood. We believe in closing as many loops as possible locally and that means that the look of the city will change. Agriculture, waste remediation, energy production, water capture, benign industrial production and other key functions will become both visible and near.

To grow New York's food, we first investigated a fully distributed approach, seeking locations all around the city and looking at all scales of production, from window boxes to agricultural skyscrapers. In the crudest terms, we discovered that it was theoretically possible to grow enough food to feed each of us with 2,400 nutritious calories a day within the city, although with compromised variety and considerable added expense. The major "practical" issue was not so much space as it was energy, and we calculated that the system would require the equivalent of the output of two dozen nuclear plants for heating, lighting and construction. Needless to say, this diverged somewhat from the spirit of the project. 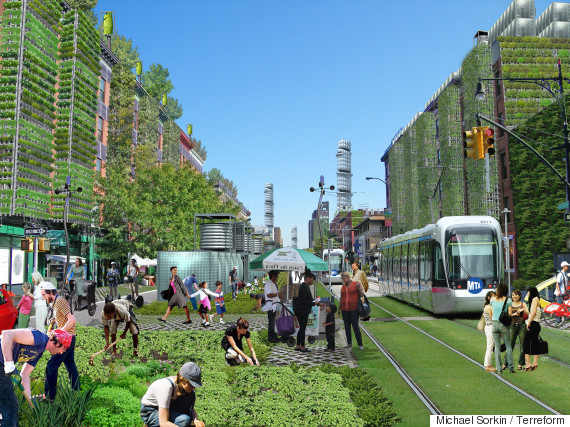 A vision of Amsterdam Avenue in upper Manhattan. A large portion of the street has been transferred from the automotive to the pedestrian realm and this newly transferred space is used for farming, waste management and small-scale public facilities.

However, in the course of investigating the marginal possibility of 100 percent self-reliance, we discovered many sweet spots -- technologies that could dramatically and realistically upgrade the sustainability, autonomy and locality of the city.

Our inventory of sites suggested possibilities in the thousands, ranging from backyards to vacant lots, repurposed streets, growing walls and large-scale farming activities on industrial rooftops. Many of these sites are already economical and many -- from beans sprouting in basements to lettuce growing in lofts -- are already in use. What's more, New York is very much a city of collective kitchens -- just think of the restaurants that send hot dinners to every corner of town and all the huge catering and institutional suppliers.

As habits change -- especially in settings for the preparation and consumption of meals -- cities must respond accordingly. Our work seeks to find a wide variety of potential transformations in each area under investigation that invent their own new forms of practicality, economy and enjoyment. We've therefore looked at the way the city might grow 30 percent of its food internally, the way in which a 100-mile radius might be engaged as a "food shed" and the possibility of a statewide scheme turning the Erie Canal alimentary. 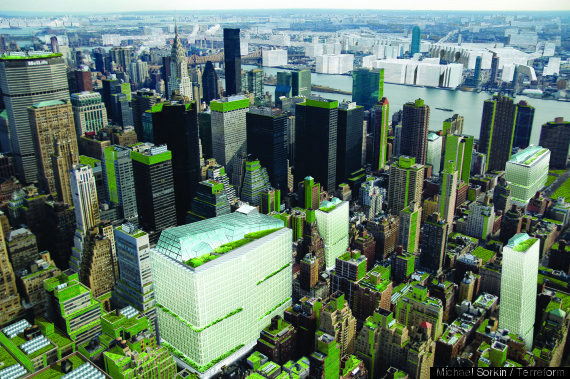 This 30 story vertical farm occupies one block in mid-town Manhattan and has the capacity to feed approximately 15,000 people. It is located above a subway station, which we propose to repurpose as part of logistical system to move goods throughout New York.

It wasn't so long ago that all cities depended on their contiguous hinterlands for their food supplies, and many contemporary cities continue this intimate relation between production and place. Havana has a system of shared gardens -- the famous "organiponicos" -- that raise virtually enough fruit and vegetables within the city limits to supply its entire population. Detroit is engaged in an enormous conversion of derelict lots to farms. Large-scale vertical agriculture is underway in climates as diverse as those of Sweden and Singapore. Just a few weeks ago, Gotham Greens -- New York City's largest grower -- opened a 75,000-foot greenhouse farm on top of a new factory in Chicago which, it's predicted, will produce an estimated million pounds of vegetables a year (and 40 jobs!).

These examples intrigue us not simply from the standpoint of enhanced autonomy but for their capacity to create new patterns of urban economic diversity and -- something crucial to us as architects and designers -- to invent novel forms of the formal/social hybrid. They suggest the way in which an urban mix -- the true DNA of the city -- will be transformed to enhance sustainability, equity and pleasure.

As each city works through the means to increase its own independence, we see fabulous and fresh forms of local identity growing strong.

City Limits: How Localizing Is the Key to Our Urban Future
Best Bay Area Urban Farms 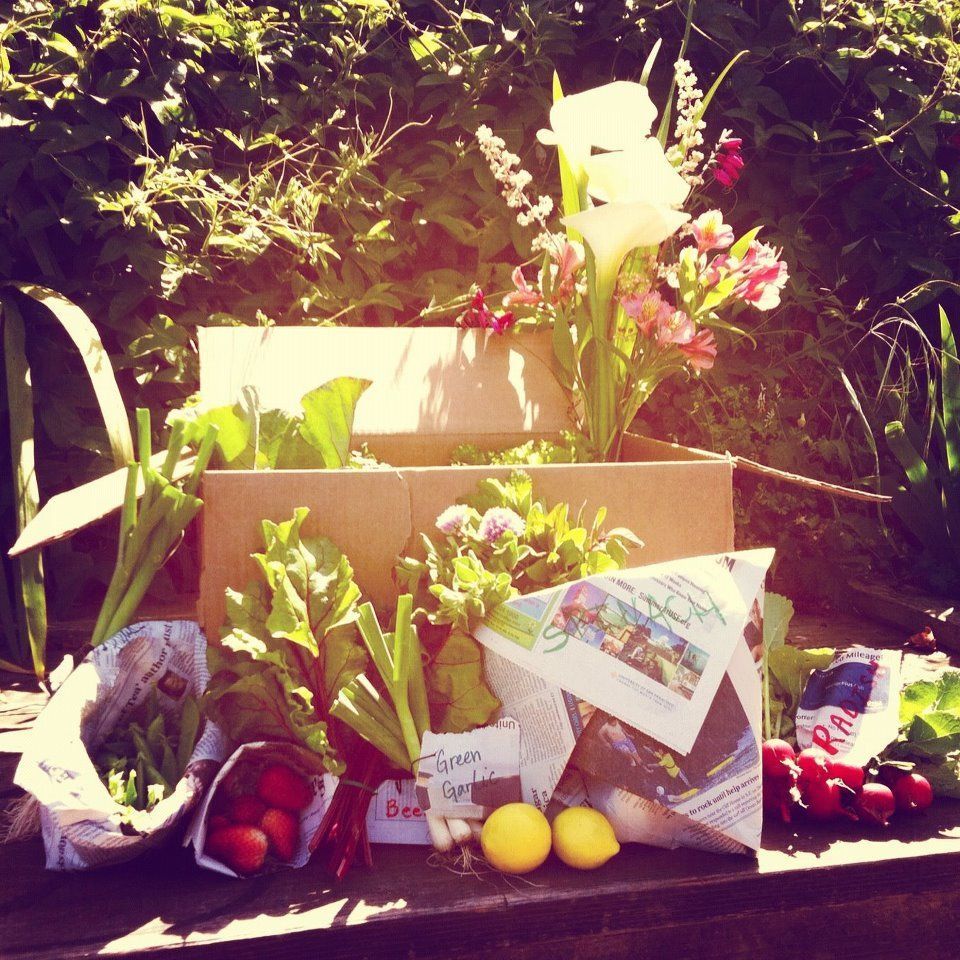