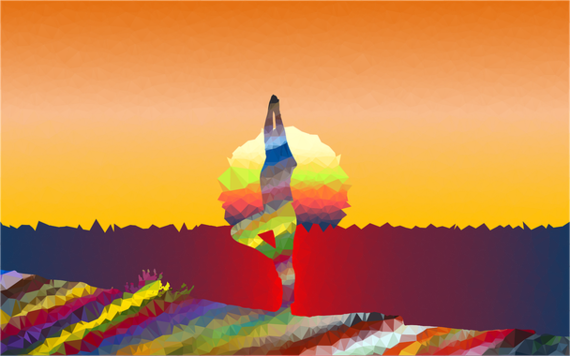 Durham, NC - Local mother and yoga enthusiast Ruby Grace was escorted out of a weekend GOP rally after the gun she was carrying was revealed to be a yoga mat.

Authorities were alerted by Sharon Stiles, who says her aunt participates in yoga. "I knew right away what it was from the [lotus] flower on the bag. My aunt has something like that tattooed on her shoulder, and she is crazy liberal. I mean, she drinks her tea hot, for christ sake. I couldn't live with myself if she whipped that bag open and subjected us all to downward dog."

Grace, who was trying to find the nearby Bernie Sanders rally, says she realized fairly quickly that she had stumbled into the wrong arena. "There was a lot of camo and really terrible beer."

Republican devotee Jeff Rawlings reported feeling unsettled that someone could walk into a rally with an openly carried yoga mat. "We all thought it was some sort of joke. A rifle disguised as a yoga mat. I gave her a high five," Rawlings visibly shuddered and added, "The next thing you know she'll be trying to sell us hippie oils. That shit ain't right."

Grace says she was quickly ushered out of the building by a security guard in a hat bearing a confederate flag. "He wasn't so bad -- I offered him a pot brownie and we got on ok after that."

Graham Sawyer, head of security for the event, declined to comment on the contents of the brownie, but said that the two did share a beer which he was surprised to discover had taste. "She was a nice enough lady, but I worry about her kids growing up in a house with yoga mats just left out all the time. How does she know they won't use them?"

Looking up from the gun he was cleaning, Rawlings added, "Young folks these days don't have so much impulse control, and I've heard that yoga is a gateway to meditation. I mean, have these kids even taken a yoga safety class?"