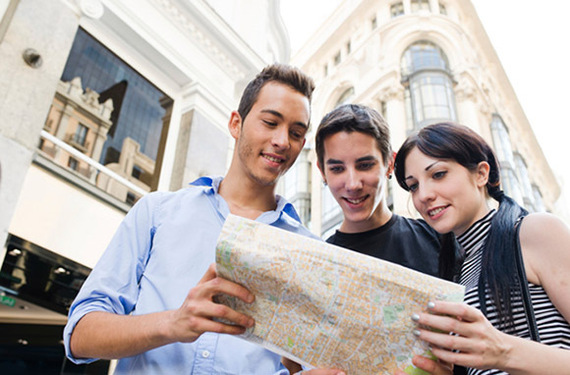 We envy the people that live in the dream destinations we visit. But we understand it can be hard for locals to deal with crowds of tourists day after day. We asked our readers: "What are the most annoying things tourists do in your city?" Find out what bothers residents the most, so you can avoid irritating locals next time you travel.

Metro escalator etiquette was a big one for the nation's capital:

"WALK ON THE LEFT, STAND ON THE RIGHT. You are visiting and I am on my way to work. Please do not block the entire path and get out of the way." -- Megan Crew

"They do not know the 'rules' for riding escalators. Stand right, walk left and not the other way around! It seems a minor offense, but when you're in a city that's constantly rushing." -- Renita Lake

Related: Getting the Most Out of a Rail Journey

When ordering cheesesteaks in Philly, you have to know what you're doing so you don't hold up the line. If you mess up, you might be sent to the back of the line. You basically say you want a cheesesteak, and then specify whether you want cheese (and what kind of cheese) and/or onions. Don't ask a lot of questions. Don't dawdle. -- David Pemberton

"Jaywalking or ignoring the walk signs in the San Francisco crosswalks. SF drivers are neither very skilled nor very safe. Use the crosswalks and do what the signs say." -- David McGrath, St. Petersburg, Florida

The 'snowbirds' drive 10 miles below the limit at rush hour, make left turns from the far right lane, and make it impossible to park at the supermarkets. BUT, they bring revenue to keep our businesses alive and our downtown thriving, and after May 1, we can enjoy our city again. So let's look at the positives, folks. -- Sue Fishalow

Traverse City, Michigan, has many festivals. It is a beautiful area. Tourists use our beaches and parking lots like trash cans. Every evening the beach cleaners have to clean up the mounds of trash people threw down. They come for the beauty and fun, and leave the area a mess. -- Lynn Larson

Related: Beach Etiquette: What Not to Do at the Shore

Stay out of the bike lane on the Brooklyn Bridge (or any bridge). [Tourists] either walk in the lane or they stop and take pictures in the bike lane. There are pictures of bikes painted on the lane for those who do not read English. -- George Miley

"I'm annoyed [by tourists] putting locks on bridges and fences in my second hometown, Paris. It's an unsightly and damaging habit that has spread to many cities." -- Annette Cartozian

Related: What Not to Do in Paris

[Don't] ride motorcycles in a SLOW, large pack. If you get behind one where it is impossible to pass, you begin to understand road rage. And they are clueless. We live in a beautiful area of Texas that lends itself to scenic drives, but slow automobiles will generally have the courtesy to move over, which you can legally do. Motorcyclists, however, seem to feel as if they all must stay together or perish, and will not move over no matter how many cars are lined up behind them. Locals hate it! -- Cynthia Hurayt

Blocking sidewalks and crosswalks in Manhattan. There are groups, families, etc., that walk next to each other slowly and prevent others behind them from passing. During the Christmas holidays I was walking on 5th Ave near Rockefeller Center. Both the sidewalks and streets had barely moving traffic. There was a northern European family standing in a circle (about eight people) talking. The entire sidewalk was blocked. As people had to brush against them to pass,they looked at us like we were rude. -- Anne DiLorenzo

Look On the Bright Side

And finally, some positive perspective from locals:

Nothing they do annoys me. If people are interested enough in my city to want to come and visit, that's something that should be supported. We could use the money and jobs their visits bring and should react with appreciation and not petty criticism. -- Donna Cuervo

Read the original story: Locals Tell All: The Most Annoying Things Tourists Do in Their City by Caroline Morse, who is a regular contributor to SmarterTravel.