This winter, be careful asking Michigan residents the question, "How cold will it be when I visit Michigan?" Our new research suggests that you're better off asking this question to a tourist who just visited Michigan than a friend who is veteran of Michigan winters. 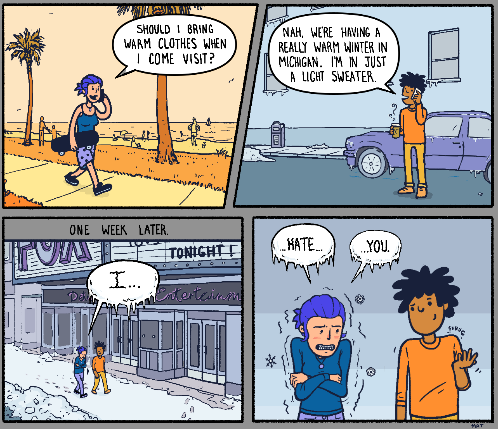 In our research published in the latest issue of the Journal of Personality and Social Psychology, my colleagues, particularly Ed O'Brien of the University of Michigan, and I found that people with a lot of experience tend to project their own desensitized feelings on people who aren't yet desensitized (e.g., tourists). Our research was partially inspired by Ed's tendency to underestimate how cold his friends would find Michigan and by my tendency to underestimate how miserable my friends would feel about Los Angeles traffic.

To understand the desensitization bias at its most basic level, we conducted a number of experiments. In these experiments, we repeatedly exposed people to pleasurable items (jokes), painful experiences (loud noises), and even shocking photographs (scandalous photos of Lady Gaga and daring X-Games stunts). Just like a veteran of many Michigan winters becomes desensitized to the cold, our participants became desensitized to the stimuli over repetition. Eventually the jokes weren't as funny to them, the painful noises didn't hurt them as much, and the once-shocking photographs just seemed boring.

But here's where that big desensitization bias comes in: These well-experienced desensitized people thought novices experiencing the content for the first time would feel the same as they did after repeated exposure. That is, veterans thought a novice would feel the same as they do now. Even when we explicitly pointed out to people how different and biasing their repeated experiences might be, those with lots of experiences still failed to account for their bias when predicting for novices.

In fact, people with less experience were better at predicting how novices would react to novel content (e.g., hearing a joke for the first time). More experienced people made worse predictions because their more recent experiences made them so out of touch with their original experiences.

Even though all Michigan residents once had their first Michigan winter, these residents may be often biased to use how they personally feel about their most recent Michigan winter to predict how another person will experience a first.

Locals cannot always be trusted to be the perfect guides. They may know the best routes through a town and a great secret restaurant, but locals are often out of touch with many tourists' experiences and desires. Accordingly, when tourists visit locals, locals need to take steps to look beyond their own emotions. Sometimes, looking at websites where tourists rate their experiences can be the best way to get a sense of what tourists will actually feel about the sights, the culture, and the cold.

But if this winter, you do find yourself recommending how many jackets your Californian friend should bring to Michigan, it might be best to err on the side of too many than too few.

Troy Campbell is a psychological researcher at Duke University. If you liked this post you may also like his posts West Coast Winter and People Can Be Emotionless Like Spock .