When Martin Pistorius was 12, he was felled by a mysterious illness that slowly stripped him of his ability to move and speak. Doctors told his parents that Pistorious was a vegetable, and that he ought to be placed in an institution where he could die comfortably. But he didn’t die. For 12 years, his parents shuttled him to and from a special center in the day and saw to his needs at night. All the while, Pistorius’ parents cared for him but lived their lives as if he wasn’t mentally “there” and couldn’t understand anything that was going on.

But there was a twist: Pistorius was awake and alert nearly the entire time.

Pistorius estimates that he began to “wake up” when he was around 14 or 15 years old. Simply knowing that he was mentally present gave him the strength to continue recovering from his vegetative state by actively re-developing his mental faculties, despite the fact that he was effectively alone in the struggle. All by himself, he learned how to tell time, keep his spirits up and eventually find someone who understood what his eyes and half-smiles were trying to communicate. Pistorius' incredible story of resilience and inner strength is chronicled in his 2013 memoir Ghost Boy: My Escape From A Life Locked Inside My Own Body and will also be featured this weekend on NPR's newest show Invisibilia. 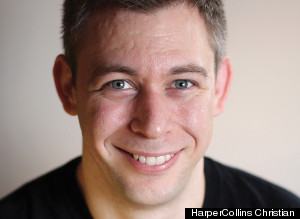 Photo of Pistorius from 2012. (HarperCollins Christian)

Researchers first coined the phrase “locked-in syndrome” in 1966, but the earliest written description of the condition dates back to at least 1844, in Alexandre Dumas’ book The Count Of Monte Cristo. The character was described as a “a corpse with living eyes,” who communicated by blinking to a helper who pointed at words in a dictionary.

People with LIS have full mental cognition but are, as the term implies, imprisoned in a body that doesn’t let them communicate with the outside world. Because they can’t speak, and have almost no control over their facial movements and limbs, a person with LIS may seem to be in a vegetative state or a coma, but are in fact fully aware of everything that is going on around him or her. It can be very difficult for doctors to tell the difference between a vegetative coma and LIS, and indeed a 2002 analysis of 44 LIS cases showed that in about 55 percent of cases, it was a family member -- not a doctor -- who discovered that the LIS patient was in fact mentally present.

Diagnosis can also be difficult because, as in Pistorius' case, a patient can develop LIS after being in an initial vegetative state following his or her injury. Rehabilitation researchers Eimear Smith and Mark Delargy of Ireland's National Rehabilitation Hospital recommend carefully re-examining a patient's vertical eye movement if doctors spot a particular kind of brain injury in MRI scans. They also caution that, especially in the early days of LIS, even eye movements can be exhausting for a patient. That's why quick, simple communication codes need to be established immediately (one upward movement signifying "yes," with two rapid upward movements signifying "no," they suggest), and engaging patients in opportunities for conversation need to be frequent but brief.

The condition is caused by lesions on the brainstem, usually after a stroke but sometimes after a traumatic brain injury. The lesions can block the motor pathways that connect the brain to other parts of the body, rendering them paralyzed. There’s no way to tell how many people are living with LIS, partly because of how difficult it is to diagnose and partly because of how high LIS mortality rates can be, especially at onset. Orphanet, an international research portal for rare disease and and orphan drugs, estimates that the prevalence of LIS is less than one in 1,000,000 people.

But, like Pistorius, a handful of people with LIS have been able to break through the physical constraints that kept them from the outside world. Neurologist and LIS expert Dr. Steven Laureys notes several striking testimonies in his 2005 paper “The Locked In Syndrome: What Is It Like To Be Conscious But Paralyzed And Voiceless?” Included in his paper was the case of Philippe Vigand, who also wrote the 2000 memoir, Only The Eyes Say Yes with his wife Stephane, who realized that he was blinking to communicate with her after two months in a supposed coma.

"The couple conceived a child after Philippe became paralyzed and he has written his second book (dealing with the menaced French ecosystem) on the beach of the Martinique isles (Vigand, 2002), illustrating that LIS patients can resume a significant role in family and society,” wrote Laureys. The neurologist also describes how, in addition to activities like watching TV, listening to the radio, music and books on tape, family visits and vacations, there are examples of people with LIS who can resume their professional work. An attorney with LIS used Morse code eye blinks to write his legal opinions, and another LIS patient taught third graders using an electronic voice device.

Julia Tavalaro wrote another notable memoir called Look Up For Yes that chronicled the six years she spent trapped in her body before anyone noticed she was mentally present. It wasn’t until someone told Tavalaro a dirty joke, at which she attempted to smile, that anyone in her family realized that Tavalaro wasn’t “the vegetable” doctors thought she was.

In other words, as horrifying as the symptoms of LIS are, there is hope for families and care communities that can rally around someone with the condition. Once an LIS patient makes it past the first year and is medically stable, research has shown that he or she can continue to live for a long period of time, provided they have access to technologies that can help them communicate and move around, like wheelchairs and computer controls that are activated by head movements, or eye trackers that allow people to communicate via an interface with words and symbols on it.

However, Laureys notes that once communication has been re-established with a person with LIS, it's paramount to respect their wishes in regards to end of life care, or the withdrawal from care if they so choose. Still, Laureys concludes that patients who are diagnosed with LIS and treated early and intensively with communication and motor therapy can eventually return home and lead fulfilling lives.