Logan Lerman has come a long way from playing Mel Gibson's son in "The Patriot." The 20-year-old actor has appeared in blockbusters like "Percy Jackson & the Olympians: The Lightning Thief," thrillers like "The Number 23" and even a Western: Lerman played Christian Bale's son in the 2007 remake of "3:10 To Yuma."

Despite that impressive resume, it's 2012 that has catapulted the California native onto the list of major talent to watch. In addition to filming Darren Aronfosky's "Noah" (where he plays the son of his "3:10 To Yuma" co-star Russell Crowe), Lerman leads the charming coming-of-age film "The Perks of Being a Wallflower."

Written and directed by Stephen Chbosky -- and based on his seminal teen novel of the same name -- "The Perks of Being a Wallflower" focuses on Lerman's Charlie, a shy high school freshman who befriends a group of seniors (played memorably by Ezra Miller, Mae Whitman and Emma Watson). With "Perks" expanding to theaters around the country this weekend, Lerman spoke to HuffPost Entertainment about his work on the film, what Aronofsky is like as a director, and whether he has any hard feelings about not landing the role of Spider-Man in "The Amazing Spider-Man."

Mae Whitman said she met with Stephen Chbosky for two hours to discuss her character before even being cast. What was your experience like with him? We had a meeting at this one place that we ended up actually going to a bunch of times. When I first met him, I wasn't even sure which role I was going to play, and Stephen was interested in the idea of me playing Patrick [played by Ezra Miller in the finished film]. I was like, "You know, what about Charlie?" He's like, "All right, just come in and read for me." I did that and got the part. It was pretty quick but it took a while for the film to get financing and go into production. In that period of time we met a lot and discussed the story and the characters and the casting. Everything else that goes into pre-production. I think he just kind of saw what I was doing; I just presented my idea of who Charlie was and how to play him. It just seemed like he liked it.

The cast has such great chemistry together onscreen, which is so important to the story. Was there a specific moment when you realized that everyone was coming together? No, we hated each other! [Laughs] I'm playing around. We had a great time. It was weird. I don't know if it was because of the material and how passionate everybody was about their characters, but literally within minutes we were all close friends. In the time period of making the film -- and the fact that we were all really isolated in where we were living and none of us could get around -- we all grew very close and bonded immediately. It's pretty rare to get a group of people together who all get along, or even want to hang out with each other for months. But we really lucked out. Everybody has been giving the credit to Stephen and his eye for casting and finding people that would complement each others' personalities.

Were you a fan of the book? It was a really popular title around my high school. It was that book that was everybody's favorite on their Facebook pages, but I never read it in high school. However, when I saw the title in an email and then the script, I was already very familiar with it. "Perks" came with a priority; it was material that I wanted to read. I fell in love with it. Then I read the book and fell in love with that too. It was a reverse process. Normally people read the book first, right?

Probably true. You have a lot of voice over in "Perks of Being a Wallflower" and you do it so well. That seems like a tricky thing to pull off for many actors. One of the challenges of it was [the elapsed time]. You record the real voice over months or a year later, when you're way past the film. For me, it was kind of odd. I kind of had to change my voice so I wasn't as mature. I had to dip back and do Charlie's own voice and affect his sweet, naive innocence. So trying to get that for the voice made it challenging. But I think it turned out pretty well.

This is such a well-rounded coming-of-age film -- it stands out because it's so different from what that genre has become over the last decade. Were there any films that you watched before filming to get you in the right frame of mind? I've been hearing a lot of people compare it to a John Hughes film, but for me it was really "Ordinary People." It reminded me a lot of that. That was the number one reference for me. It kind of felt like the "Ordinary People" of 2012.

One of the more charming parts of the film is that Charlie and his friends can't find David Bowie's "Heroes." This is an era of Shazam and Google, but was there ever a song that you fruitlessly searched for? Oh, so many times! So many times! That happens to me once a week.

What was the last time? The last one [long pause] … what was it? I'm still trying to find the song. I still don't know what the song is, it's one that I'm searching for. I feel like it's a Lynyrd Skynyrd song.

Where did you hear it? I think it was the "Wonder Years." I was watching the "Wonder Years" recently -- I know it's random. I could try to sing it for you right now, but I won't. I'm curious what it is, but I have no idea. Maybe I'll hear it on the radio.

You and Emma have great chemistry in "Perks" and now you're playing brother and sister in Darren Aronofsky's "Noah." How has that experience been? It's great. It was so comforting. Comforting is a weird word, but it's a really intimidating set to walk on to. I'm just so excited about everybody that I'm working with and so is Emma. We're the young'uns there. Our first scene that both of us had to do was with each other. It was a nice support for us -- walking into this crazy situation with a sense of familiarity.

What is Darren like as a director? Just the best. It's quite remarkable how decisive he is and how clear his vision is. Especially on something on this scale and size. It's foreign for him too, I guess, working with such a big budget and everything, but he's just an actors' dream. Or at least for me. I like his style. He knows what he wants.

How so? I haven't seen the film yet, but I feel like from everything we've worked on so far, he knows how to get a performance out of you. There's also a level of trust there. The main thing is that he's so decisive. He really knows what he wants and he's clear about it from day one. He has an answer every time for every question. A lot of directors don't know what they want -- or they don't know how to dictate their vision clearly.

Last thing: Two years ago, it was widely reported that you were a strong contender to play Spider-Man in "The Amazing Spider-Man." That obviously didn't happen. Is it difficult watching the casting process play out in the media like that? No, not really. I mean, do I give a shit? Sometimes. The only frustrating thing is when you're misquoted or something like that. It happens a lot. So you learn how to manage those quotes that people can [take out of context]. But in terms of ["Spider-Man"], there's no bitterness at all.

PHOTO GALLERY
Photos From &#039;The Perks Of Being a Wallflower&#039;
Download
Calling all HuffPost superfans!
Sign up for membership to become a founding member and help shape HuffPost's next chapter
Join HuffPost 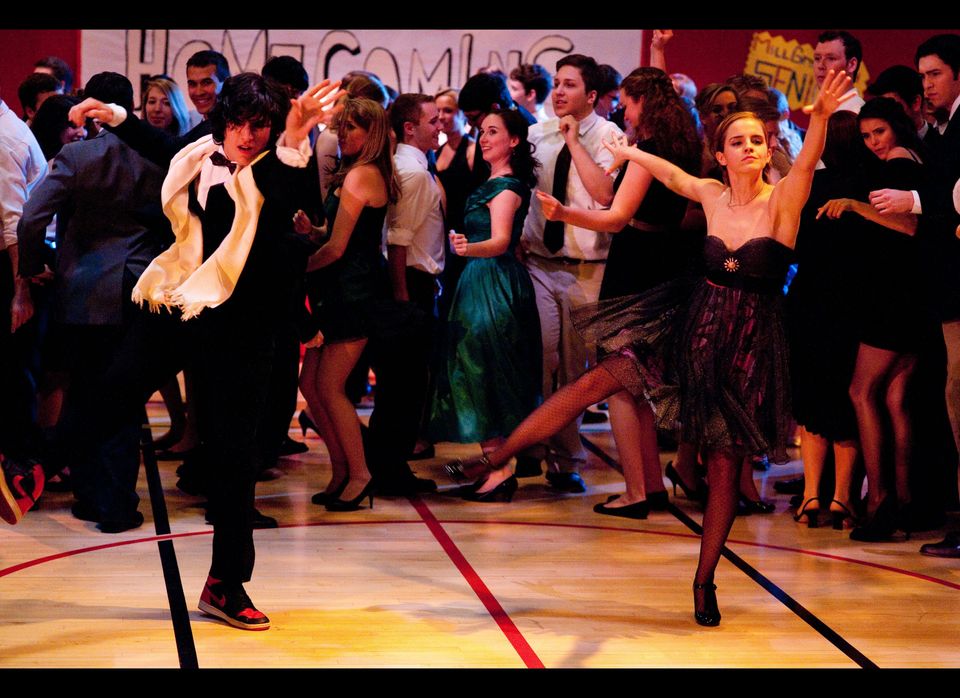