One lucky loggerhead sea turtle was released back into waters off the Florida Keys Friday after being rescued from an unusual predicament: a puffer fish he tried to swallow inflated its body to about twice the normal size in defense, causing it to get lodged in the turtle's throat.

"It's the first time we've ever heard of such a thing," said Jo Ellen Basile, manager of The Turtle Hospital in Marathon. "They had to deflate the fish in order to get it out. It closed off the glottis, blocking his ability to get air, so by the time they got the fish out, he was near suffocation."

The 99-pound juvenile loggerhead, nicknamed 'Puffer' by his caretakers at the Turtle Hospital in Marathon, was spotted in distress on December 17 by two children on vacation in the Keys. Emily and Ben Graue were snorkeling with their parents and the crew of the Jolly Roger dive boat when they saw Puffer struggling to breathe on the ocean's surface. After the captain received permission from Florida Fish and Wildlife Conservation Commission to approach Puffer, one of an endangered species, she used a life jacket to keep him afloat and bring him on board the boat.

Once on board, the Jolly Roger crew was able to discover and remove the spiny puffer fish from where it was lodged over the turtle's airway, saving him from a near-certain drowning by using a tool as a 'bite block'.

"[After the puffer fish was removed] he laid there like he was dead, and then he revived," said Bastile. "If he had been a healthy turtle they were trying to hold down, it would have been much harder for them to get the fish out of his mouth. It was basically emergency treatment."

The Jolly Roger crew then deliver their loggerhead friend to employees of the Turtle Hospital, where he was kept in a tank while receiving treatment for puncture wounds and a swollen tongue. After being held long enough to make sure Puffer didn't get an infection, he was released back into the ocean.

The spiny and inflatable puffer fish aren't part of a turtle's regular diet, Bastile said, but loggerheads are notorious for eating anything -- including marine debris like plastics and Styrofoam. When in danger, puffer fish expand their bodies by filling their elastic stomachs with water or air, which causes predators to encounter something more like a spiny ball and less a slow-swimming treat.

"I feel certain if they had not intervened," she said, "that turtle would not have made it."

Photos courtesy of The Turtle Hospital and the Graue family: 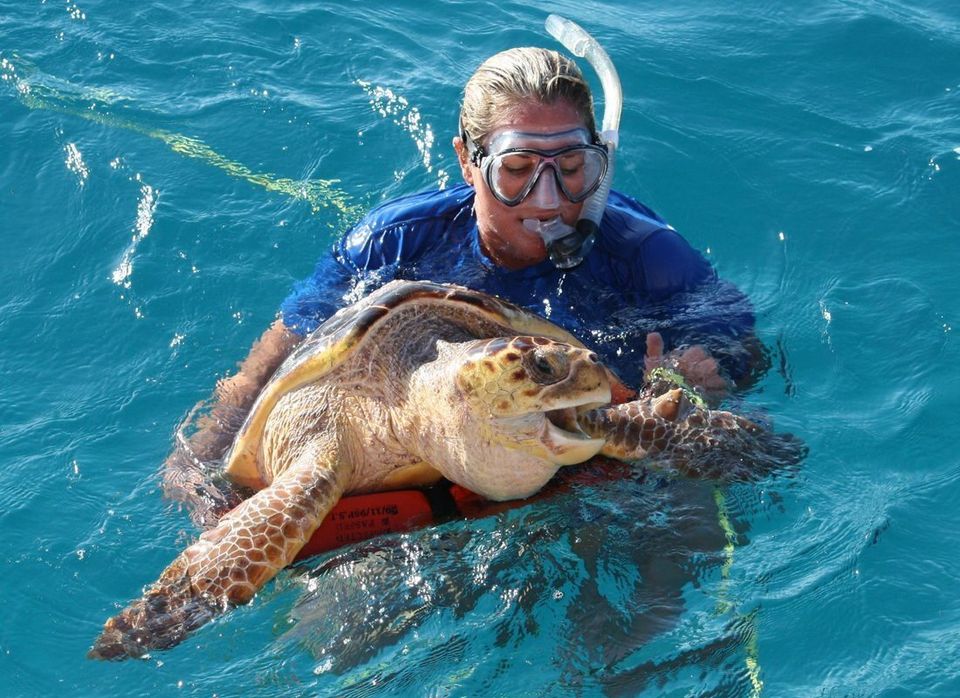