I am so tired of the illogical map of America argument that my Republican friends who can't handle a loss are making.

First of all, I want you to know that I am a Republican who didn't want Obama to win, but can accept the loss. Romney was the worst candidate ever, worse than Dole. And if President Obama's plan wins, then we all win; if it doesn't, then Republcans can say 'I told you' so in four years but until then, it's time to stop making excuses and silly arguments.

And side note: I understand that there needs to be an entirely different conversation about the misguided and illogical Republican social platform, but that's not what this post is about. 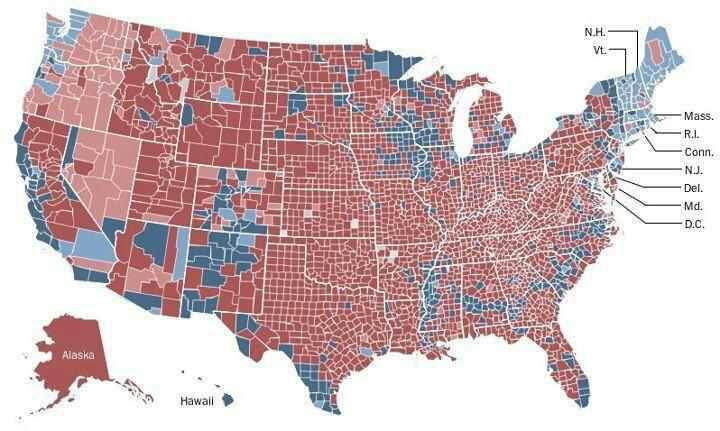 Yes, on a map showing how counties voted in the election, you see a majority of areas in red where Republicans outvoted Democrats. I like coloring things too, but here is an incredible example of where numbers beat colors in logic.

Republicans don't dominate the country; they do, however, dominate in places like the middle of Montana where only three people live. There, it's very easy color a map red because all three of those people are Republican.

The blue areas not only represent where Democrats won, but also where the majority of the nation's population live. So please, please stop making the idiotic argument that this country is comprised of a majority of Republicans by pointing to red-colored regions in the middle of Kansas, etc. where all four residents of the 500-square-mile radius are Republicans.

Don't be dumb. Accept the loss or move to Europe, Australia or whichever other Caucasian-filled area where you have been claiming you want to move while completely disregarding the fact that they have already enacted the policies that Obama is working on passing.

It's time to work together to make this country better, not continue to tear it apart by making stupid arguments and pointing hateful fingers.