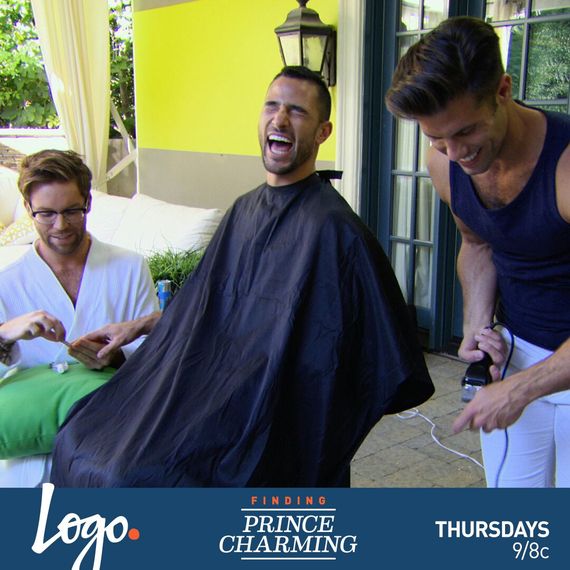 Logo TV's reality show Finding Prince Charming features 13 men selected for a chance to win the heart of one man, Robert Sepulveda Jr. When the men weren't vying for Robert's attention and affection, they were co-existing exclusively with the other suitors--"Big Brother" style. However, it wasn't just a gay-dating show. It couldn't just be that. It was the first of its kind (where all contestants were gay men) in a time where there is ultra-sensitivity to many LGBTQ issues. How do I know? I was there.

Unremarkably, top bloggers and reviewers assumed that the gay-dating show would implode in on itself because gay men apparently cannot live together without wanting to have sex. Or that the show will be uninteresting if the men accomplish the feat of abstinence to get to know just one man romantically. But that's the surface. From someone inside the house, sex was the least interesting thing about the show (whether it happened or didn't happen), instead, the psychology of how many of the suitors came to know each other affectionately as "sister-wives" (I guess we can dismiss those "no femme" critiques of the show, too) fell front and center for us as a way to explain the ways in which we could build community even in a high-stress, competitive environment.

In our struggle for acceptance, some argue that the gay community forfeits a large part of what makes us unique. It's as if part of the community said, let's assimilate quietly while more gender-non-conforming or radical members say: "we can't" or simply, "why would we want to?" It seems that so long as we are not too flamboyant or if we are flamboyant, we'd better be entertaining, then we are allowed into the protections of civilized America. However, it is our ability to not withstand these condescending attitudes, but to liberate all (non-LGBTQ included) from these, that allows us to be truly civilized. As a culture, it is imperative that the uniqueness of various minority groups flourish and tow the line of cultured and artistic expression past the status quo. Meaning, society is better when minority groups (not just the LGBTQ community) are fully expressive. There are civilized benefits in allowing LGBTQ people to experience the range of what it means to be LGBTQ, to live outside gender norms, to blur the lines and to do so without shame. But first we must get past this internal struggle:

1) Acceptance: Shame is the most destabilizing emotion that an individual or society can feel. Shame, many of us were taught, was a tool used to reign in our primal selves. In the first episode of Logo TV's Finding Prince Charming, Sam is startled by Robby; he literally does not know how to process Robby's actions. However, Robby has done nothing wrong. Many that take issue with Robby's personality often have issues with self-acceptance, as if there is a collective hush asking the Robbys-of-the-world to not be "so out there, because we have almost convinced straight people that we are just like them." Here's the deal, we aren't just like hetero-normative culture. We aren't like them for the very reason we'd need them to believe we are: self-acceptance of ourselves and the diversity of our community is first requirement to reaching acceptance by and for all. And someone like Robby does not hurt our cause. People like Robby hold the door open for the rest of us to walk through the fear being noticed for who we truly are.

2) Reconciling Sexual Orientation and Gender: there is a lot of healing still left to do for the whole world around gender and sexuality. This is the root of women's liberation and LGBTQ rights. When we look at the fear of LGBTQ people, we don't see fear in the people, but in the gender-role re-structuring. This is the deal with tradition and pillars and "family values." This is why women's rights and gay rights and trans rights are so intertwined. When we begin to understand that the roles we are seeking for ourselves are often the archetypal roles of our oppressors, we can begin to heal and begin to accept ourselves as we are.

3) Unity: Verbal arguments and some spitting occurs in the show. Same loses it on Dillon, but it isn't specifically linked to Robert. It has more to do with where Sam fits in the house. In the first episodes, we get less fighting over a man and sexual situations than anticipated, instead arose a challenge that most didn't notice, but all were playing to, which is: while some of the gay men believe they were there for fun or love, we were all there for potential healing. We were up against the standard of Reality TV drama and expectations therein, juxtaposed with the critical eye of our own community: would we be gay enough? Free enough? Respectable enough? Inclusive enough? Would we be able to shine light on monogamy in the gay community? Would we be criticized for heteronormative assimilating? Early morning conversations and late night reflections has us suitors often wondering: would we be ripped apart by other gay people for not being enough of whatever they are wanting to see?

These were concepts we considered among each other. It couldn't just be a gay-dating show, it had to be an honest reflection of who we are and while we couldn't please everyone and only one man will end up with Robert, we can find a way to support one another in the house. To be a community. But can our community at-large be okay with us on this journey? For those of us who know better, we must now actively work to end the shame in our community by giving the benefit of the doubt, also known as generosity of spirit. Generosity of spirit toward our critics, toward community members we don't understand and, yes, even to those of us on a reality TV show.