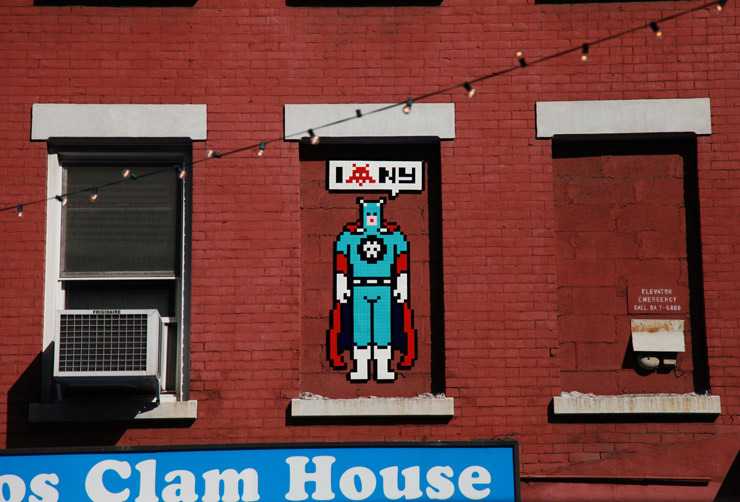 It's not that the island has been bereft of murals of late - the Los Muros Hablan festival in Harlem has been through a couple of iterations way uptown, Brooklyn has the Bushwick Collective, and Queens has been hosting the Welling Court Project.

The irony lies in the fact that this Lower Manhattan Arts Festival (LoMan) is really the first codified effort to highlight the work of graffiti and Street Art creators in a section of NYC known from the 1970s-90s for the free-range street stylings of artists like Jean Michel Basquiat, Al Diaz, Keith Haring, Dan Witz, Jenny Holzer, Richard Hambleton, John Fekner, WK Interact, REVS/Cost, and artist collectives like AVANT, among many others. 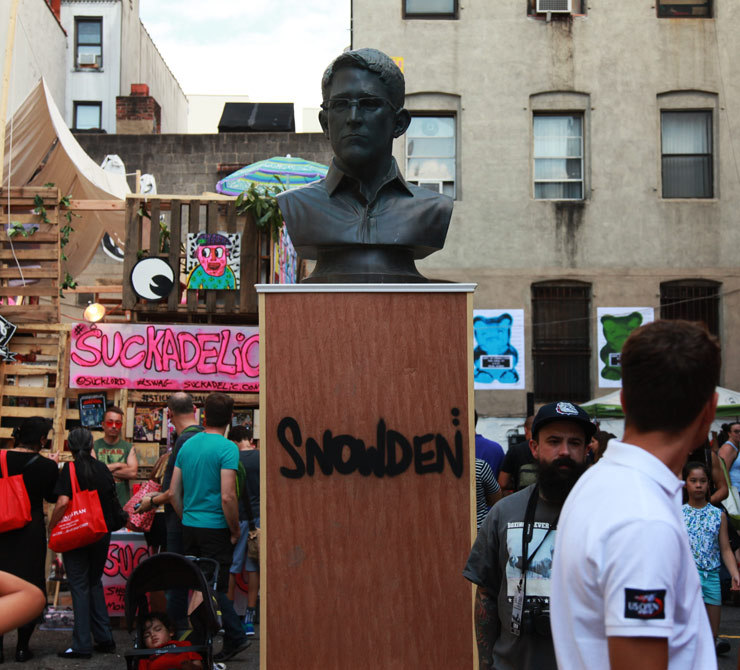 A major coup of sorts, LoMan exhibited the sculpture of NSA whistleblower Edward Snowden that mysteriously showed up in a New York park this spring by Andrew Tider and Jeff Greenspan (Photo © Jaime Rojo)

In other words, on this baked concrete slab of downtown New York that was once a creative cesspool and Petri dish for on-the-street experimentation calling upon all manner of art making, today's newly arriving young artists have no dream of moving in. In fact, most have fled in search of affordable rent.

Now the entrepreneurial spirit of a couple of guys, Wayne Rada and Rey Rosa, is luring artists back into Lower Manhattan, if only to paint a mural and help the tourist trade in Little Italy. That is how the L.I.S.A. Project (Little Italy Street Art) began three years ago, bringing in about 40 artists -- a list that includes big names and small with varying degrees of influence on the current scene. 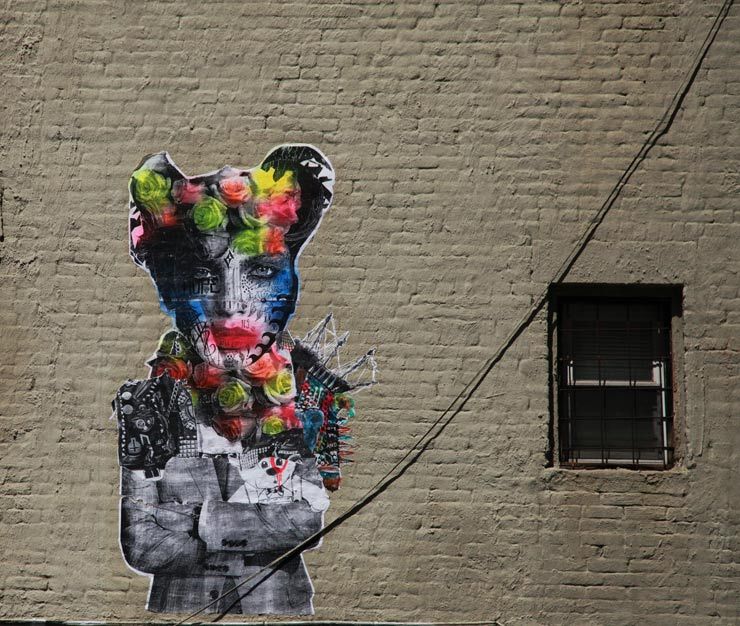 Despite the historically inhospitable demeanor of hard-bitten and often bureaucratic old New York greeting him at many junctures, Rada has had some measured and great successes along the way, convincing local wall owners to give a mural a try and raising funding from local businesses and art fans to help artists go larger.

So LoMan Fest's first edition has finished this year, and along with a few volunteers, a smattering of helpful partners, and nearly continuous negotiations with local building owners, art supply companies, cherry picker rentals, and a collection of local and international artists, Rada and Rosa have pulled off a new event. Impressively it included large murals, smaller street installations, a couple of panel discussions, some live music performances, outdoor film screenings, a sticker battle, a live painting battle, live podcasts, a graffiti zine table, and a sculpture garden in an emptied parking lot on Mulberry Street. 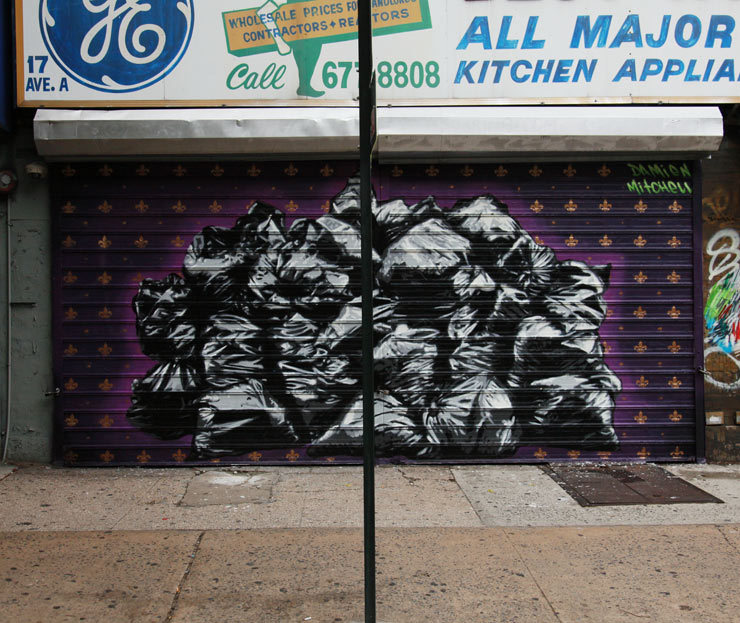 "Struggle would be a good word. But like anything else when you are starting something for the first time you are spending a lot of time putting systems in place," says Rada of the process. "There have been interesting challenges with the building owners and with the artists but when it is all said and done it has been all worth it."

For a scene that was initiated by autonomous un-permissioned art-making on private property, the process of organizing graffiti and Street Artists to do approved pieces on legal walls may try the patience of the rebels who look on mural festivals as lacking 'street cred'. But Rada sees it differently. 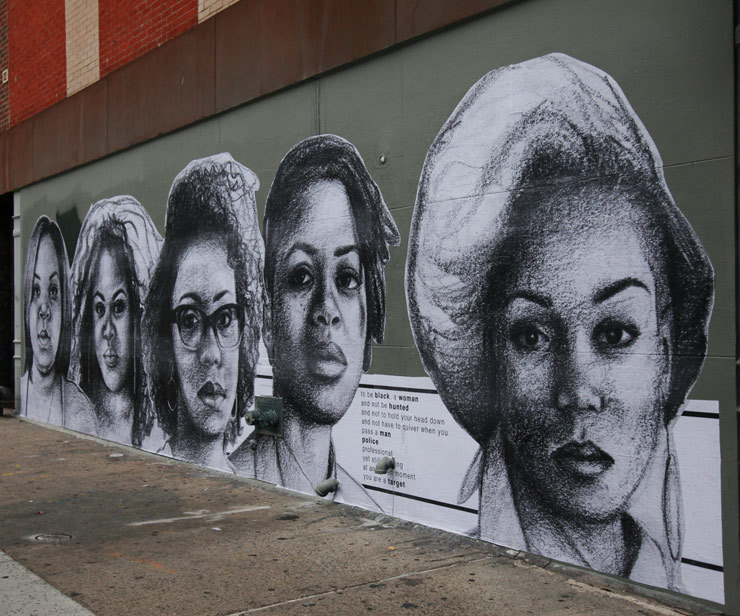 "You know there are people in this world that don't appreciate this and I just want people to enjoy the pieces as long as they can. Isn't the fun part of street art that moment when you turn the corner and discover it? That's really what we are trying to do here. For me it's a collaborative process of trying to find them a spot - which is also normally something bigger where they can take their time and really think it out. In turn, when that work is complete their existing fans enjoy it, and also it helps them get new fans." 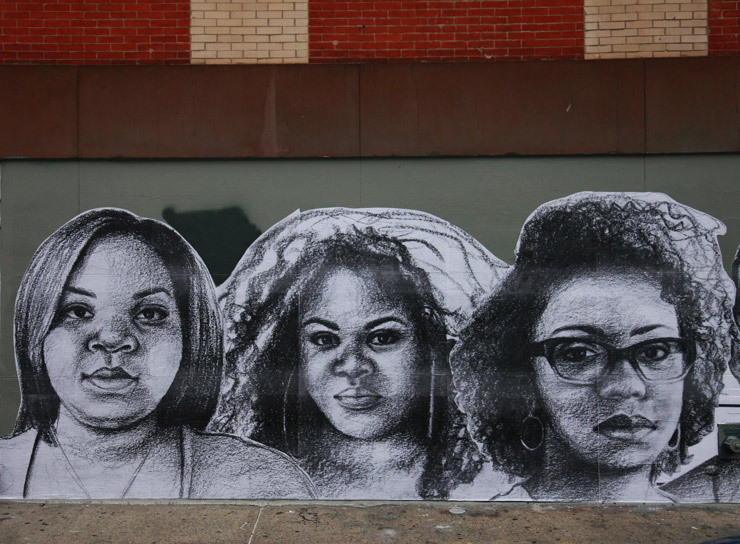 A final irony is that LoMan is joining a long list of Street Art-inspired mural festivals worldwide that you might have thought New York would have been near the front of.

Brooklyn Street Art: I imagine you've seen the rise of street art festivals and you've seen the character perhaps of specific festivals in different parts of the world. Do you think there is something specific about New York's current Street Art scene that has a personality or specific voice?

Wayne Rada: First of all I studied every single festival out there from Pow! Wow! to Nuart, every single one. I've also had conversations with people who coordinate those festivals so that I could do a better job with this. I just feel like New York is, and this is grandiose to say, the nexus of the universe for the art world. It just seemed there was something missing and it made sense to have something here." 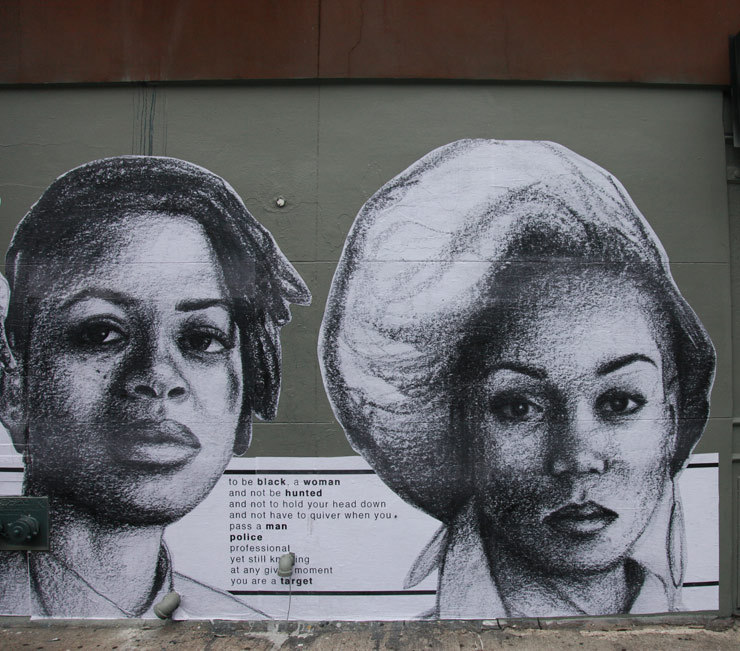 Given the history and the populations of NYC, maybe the strength is the diversity of styles and international artists who are drawn to this particular city to drop a piece throughout the year on rooftops, under bridges, on abandoned lots and doorways. After a minute, Rada decides that this may be what makes a festival like this distinctly New York.

"So in the art world there are so many artists and there are so many Street Artists - and Lower Manhattan especially is represented by something like 126 different cultures and many different races and languages that make up downtown," he says, "so it makes sense to try to be as diverse as possible and have as many of those voices represented as we could - men and women, all ages, and all walks of life."

Here's your first look at LoMan, but it won't be your last. Rada and Rosa tell us they already have 2016 all planned. 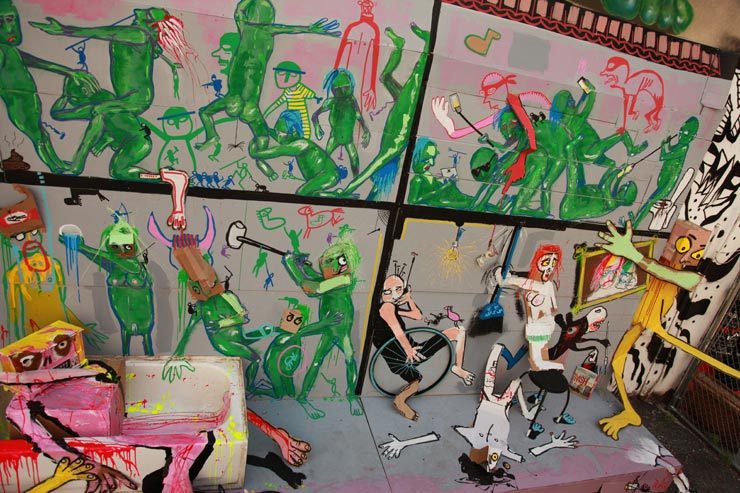 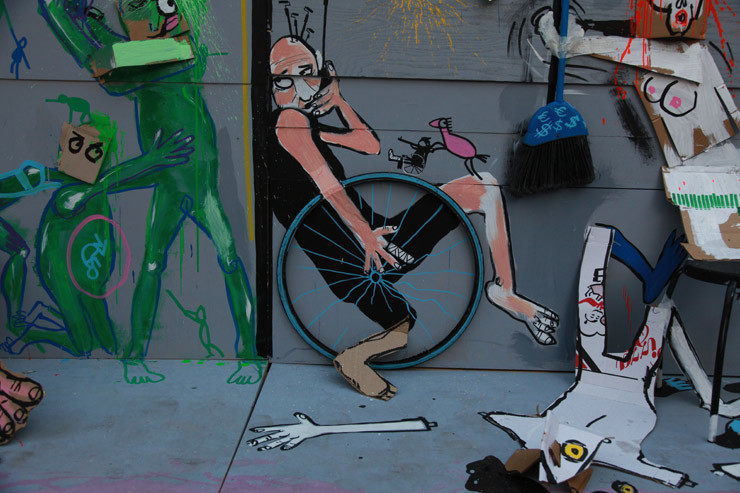 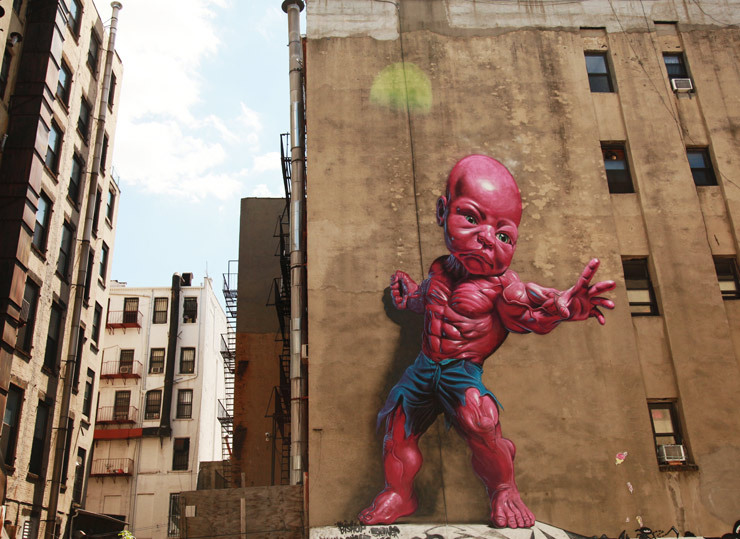 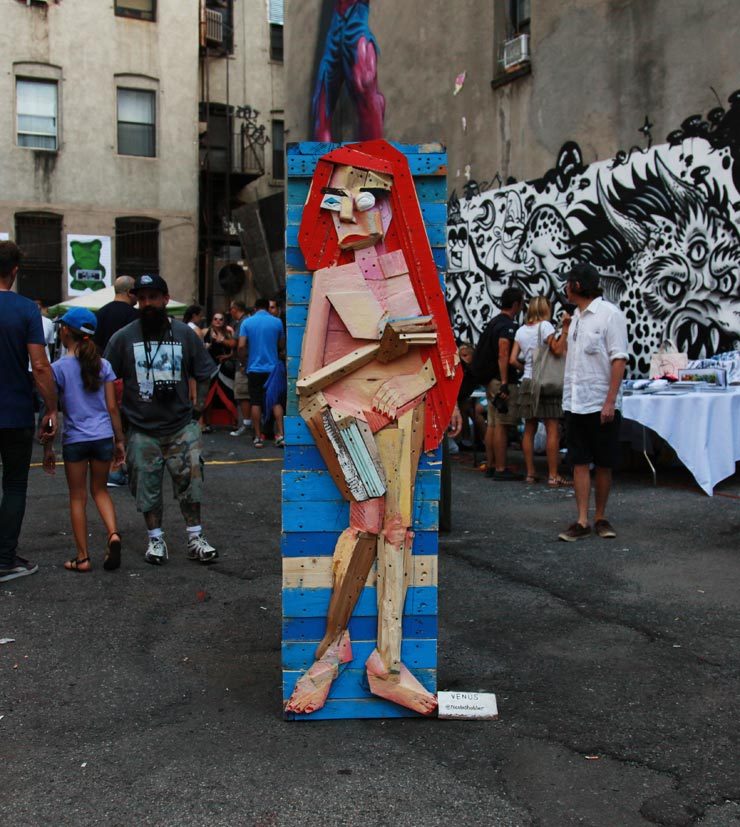 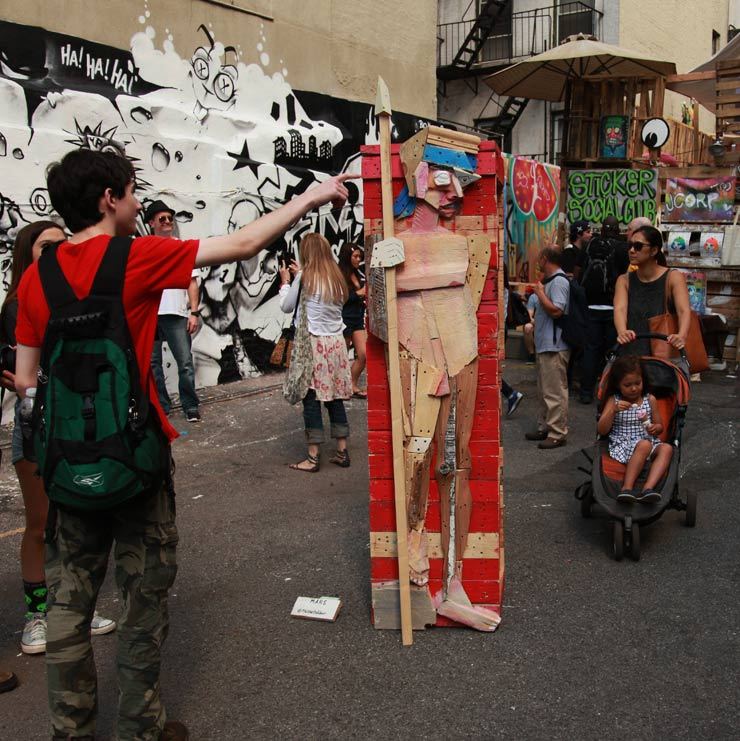 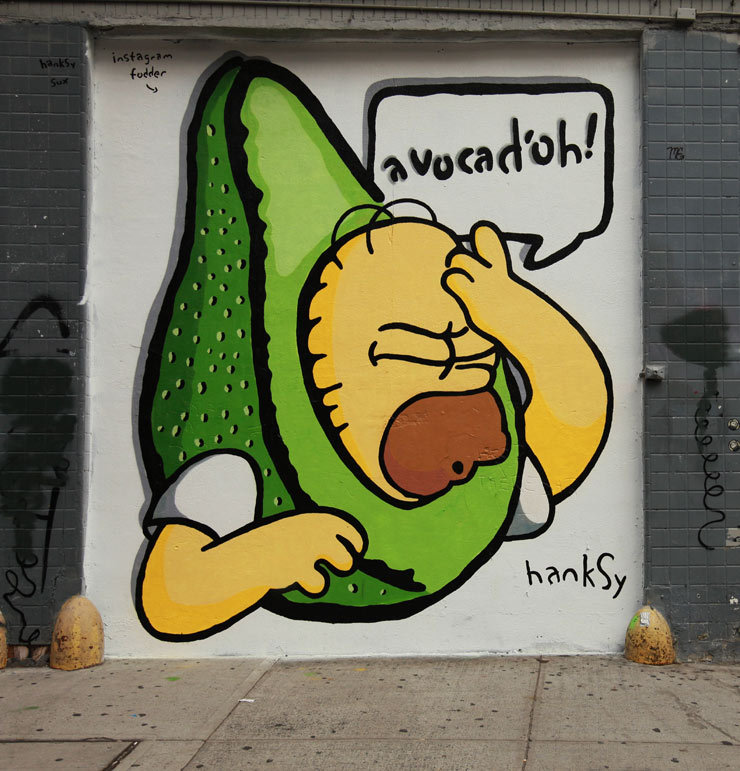 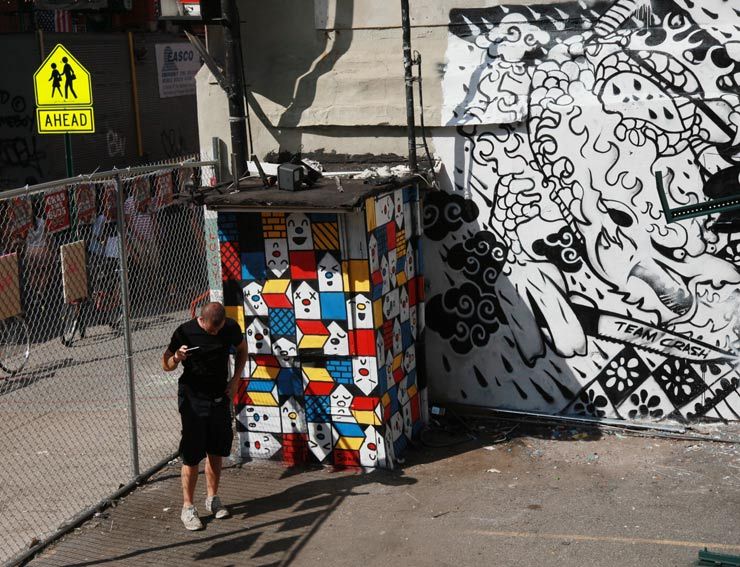 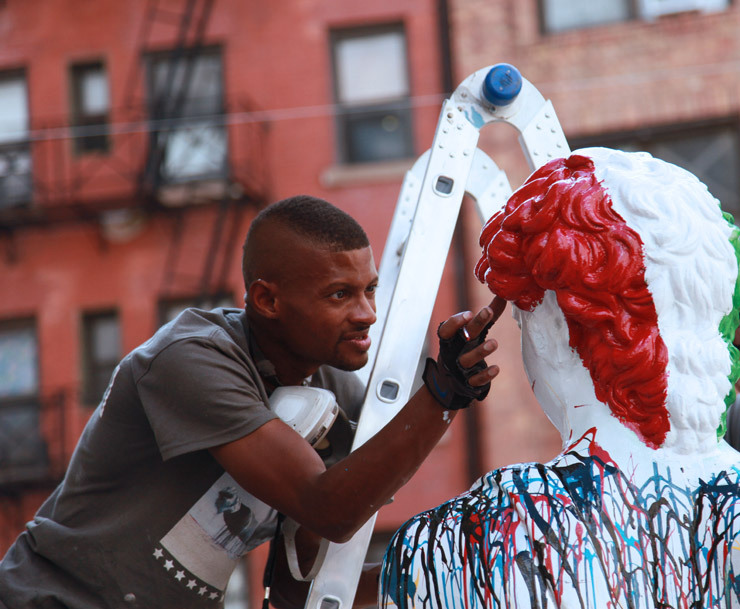 The DRiF pimping a statue of David. (Photo © Jaime Rojo) 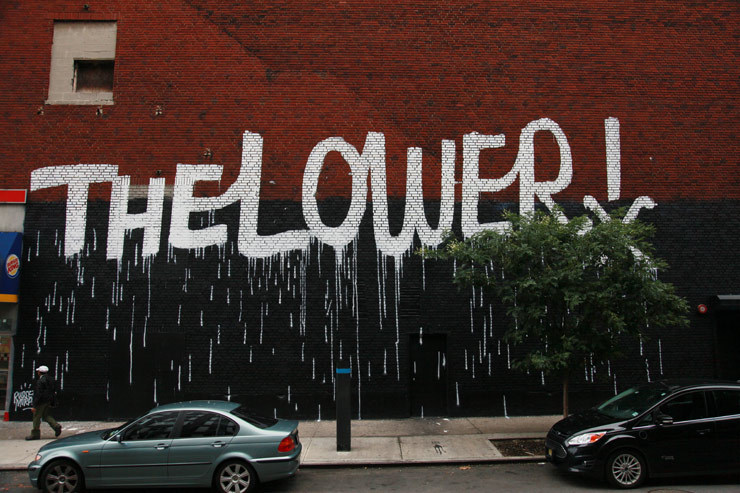 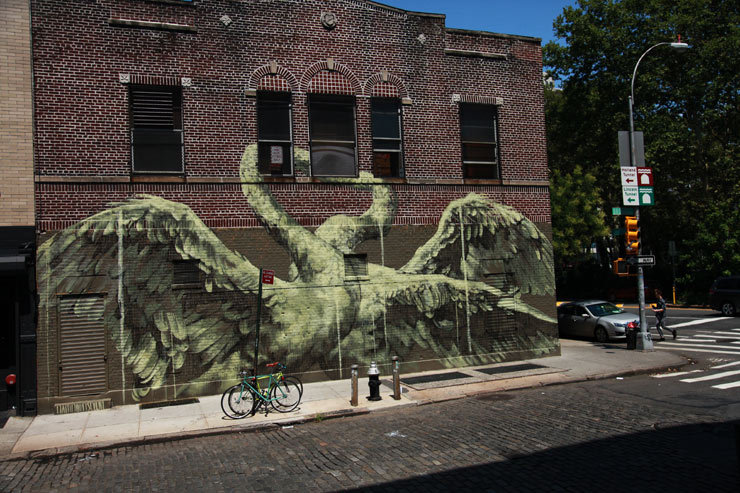 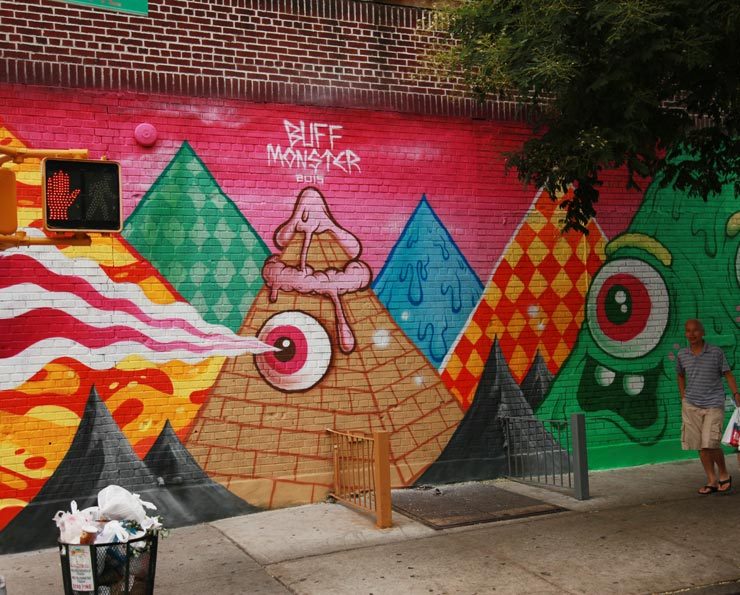 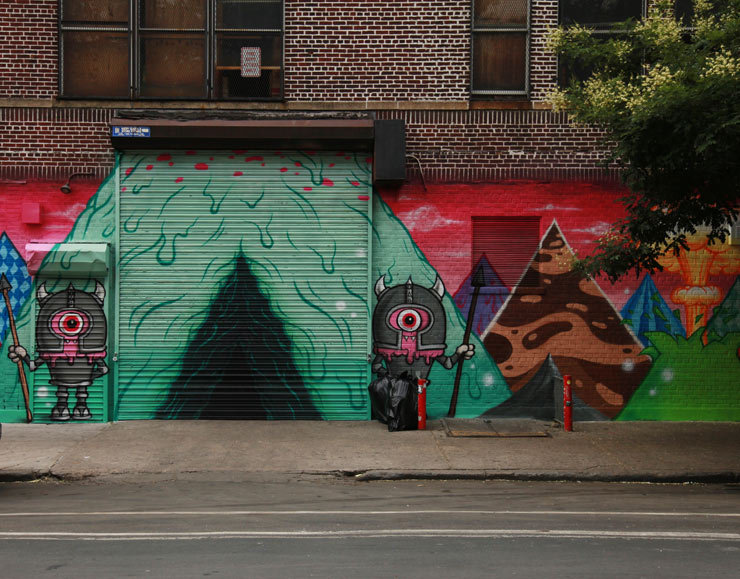 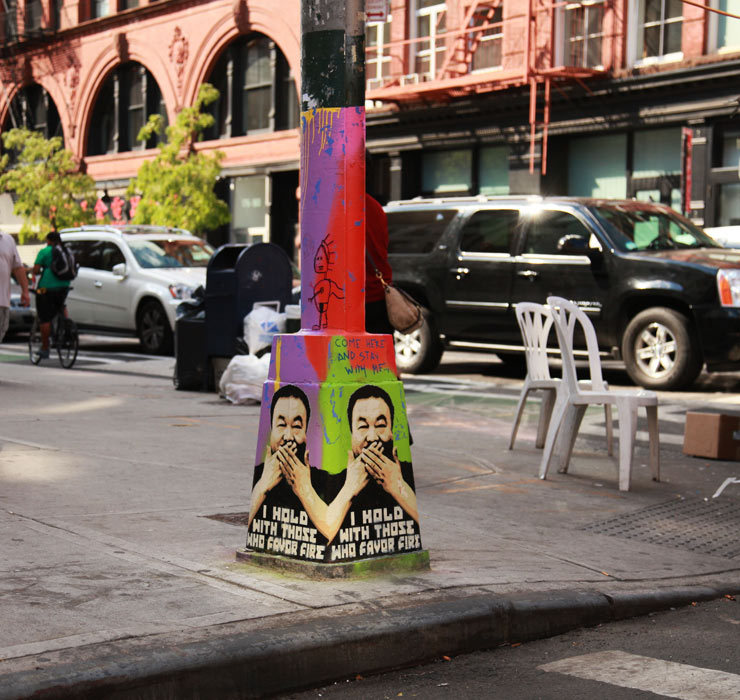 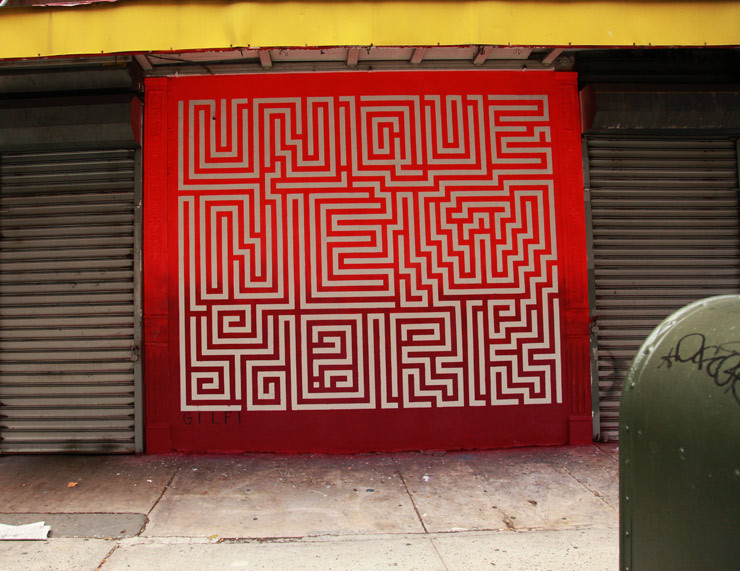 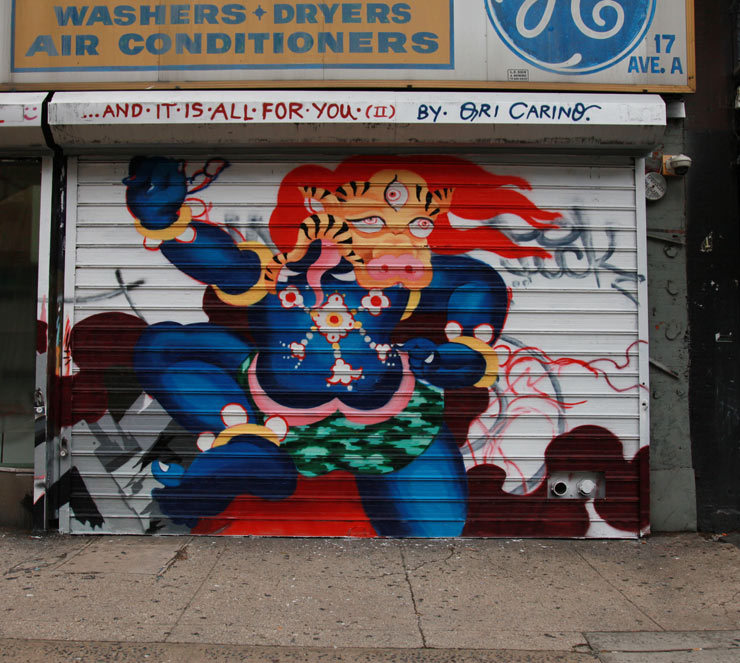 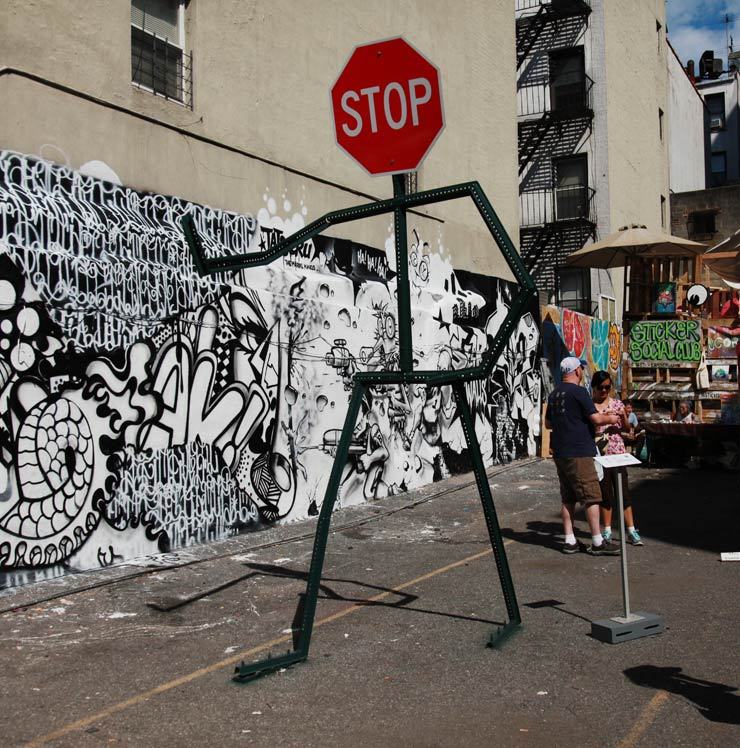 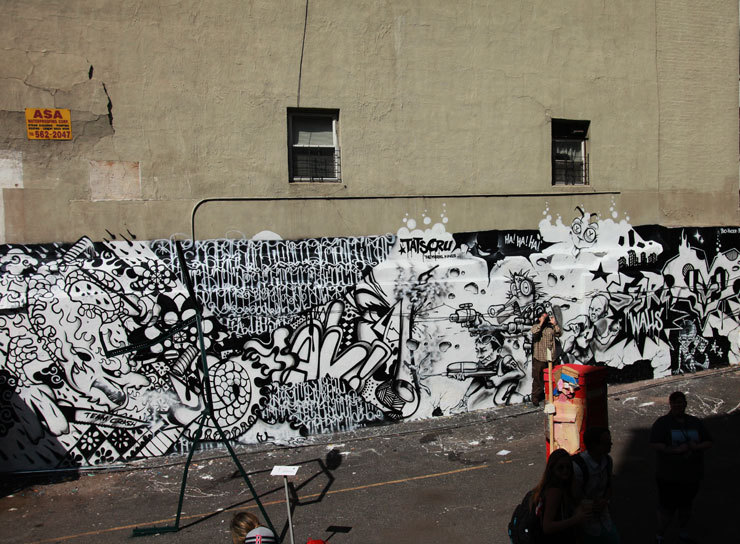 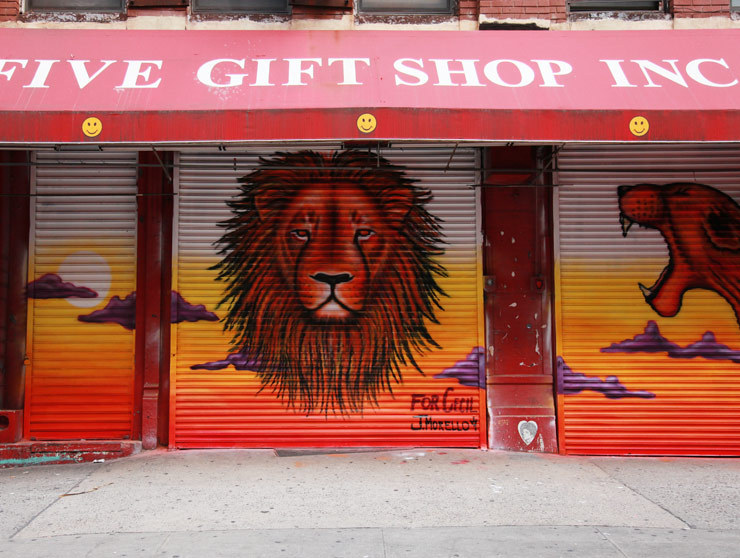 To learn more about the LoMan Art Fest click HERE