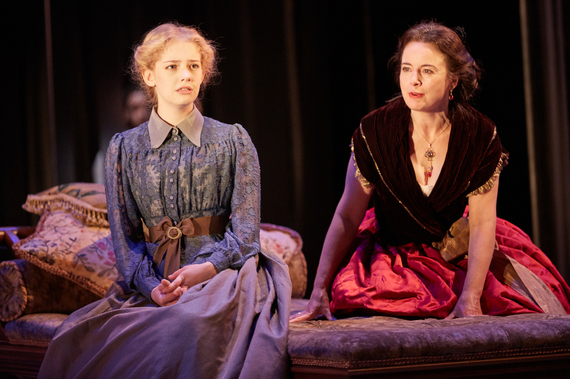 An American theatergoer in London can always be sure to find an intelligent modern-day adaptation of a world drama classic or two. At present, both the National and the Almeida have successful examples on offer.

At the National, Patrick Marber -- author/director of Closer -- has taken Turgenev's A Month in the Country and whittled it down, from its four-hour length to two-and-a-half; and from a month to three days. The languor of a Russian month, circa 1850, has been correspondingly translated into Three Days in the Country; modern-day audiences don't need to sit through all of Turgenev's weeks to absorb it.

What's more, Turgenev's characters -- while rooted in time and the place, the latter being a country estate with hundreds of souls (serfs) -- are neither foreign nor dated. Lady of the Manor Natalya -- who is bored with both her husband Arkady and her ex-lover Rakitin -- falls hard for her young son's young tutor Belyaev; don't we read about this online, constantly, with the movie star/politician/mogul-husband and the nanny? Natalya's teenage ward Vera is similarly in thrall, while the tutor is actually playing footsy with housemaid Katya. Some might find the action a bit too streamlined, but Marber's adaptation makes the piece vibrant and relevant for today's viewers while covering all of Turgenev's necessary bases.

Marber puts it all on a spare but stunning set by Mark Thompson (One Man, Two Guvnors) which features a distressed-red door enigmatically flying over the stage in Act One. (Said door is brought down to earth in the second act, and has distinct relevance to the play.) The cast at the Lyttleton is, as usual with National productions, filled with fine actors. Amanda Drew's Natalya serves as the focal point, John Simm's Rakitin is engaging, Royce Pierreson's Belyaev is properly caught up in the tangled web and Lily Sacofsky is radiant as the young Vera. 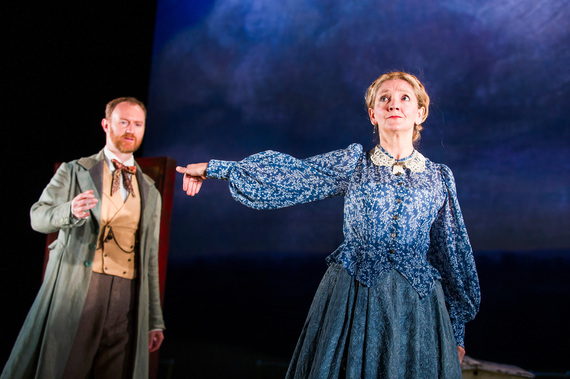 The lot of them, and in some ways the entire play, are somewhat overshadowed by Mark Gatiss as the self-described quack of a local doctor Shpigelsky. This, in large part, is Marber's own doing; the scene at the top of the second act in which Shpigelsky proposes to the spinster Lizaveta (Debra Gillet) is so well written and staged that it is the comic standout of a not-so-comic play. When Gatiss -- with his back suddenly thrown out -- plights his troth while crawling across the stage like an upside-down crab, we almost feel as if we are indeed back in One Man, Two Guvnors. Gatiss and Gillett, the pair of them, are so good and so funny that we miss them when the plot heads back to Natalya & Co. If Three Days in the Country were a sitcom, the network would already by spinning off the recalcitrant lovers into their own series. 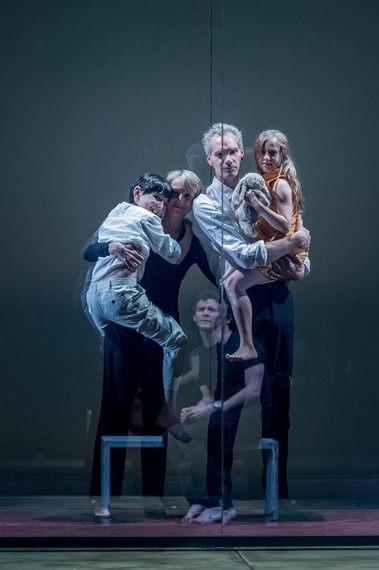 While Marber and the National have refashioned a century-and-a-half old play for modern-day audiences, playwright/director Robert Icke -- who provided the script for the Almeida's hit 2013 adaptation of George Orwell's 1984 -- has turned to a real classic: The Oresteia of Aeschylus, which won all the awards at the Dionysia Festival back in 458 B.C.

The production, which is in the final month of its West End transfer at Trafalgar Studio 1, is stark, bloody, high voltage and thoroughly arresting. For a play that takes more than three-and-a-half hours and a story that is some 2400 years old, Ickes chooses to concentrate on the passage of time: the theatre is plastered with digital clocks, offering a countdown to the beginning of each of the four acts -- if you're not in your seat when it hits zero, you stand in the lobby till the next act. The clock also flashes -- above the stage and along the walls of the auditorium -- the time of each Greek death; not the historic date, but the moment within the running time of the play.

Most striking is the immediacy. The happy family -- who might just as well be living in the present -- consists of a stay-at-home mom, a teenager and two younger children, and a husband who is just returning from an out-of-town business trip. We don't learn for a while just who they are, although the title (Oresteia) gives it away. That is, at least to those viewers who are familiar with Greek drama; a substantial portion of the current-day audience, I suspect, only has the foggiest notion.

Then Agamemnon (Angus Wright) comes home, young Iphigenia protests eating venison because they had to kill a deer, and Agamemnon -- obeying the will of the gods -- murders Iphigenia. They call it a sacrifice for the good of the State, yes, but it is still a father carefully and methodically administering poison to the wisp of a girl and cradling her in his arms as she dies. And then, yes, mama Klytemnestra (Lia Williams) kills papa, and finally the now-grown son Orestes (Luke Thompson)--after numerous onstage sessions with his therapist--kills mama at the urging of elder sibling Electra (Jessica Brown Findlay, better known as Lady Sybil of Downton Abbey). 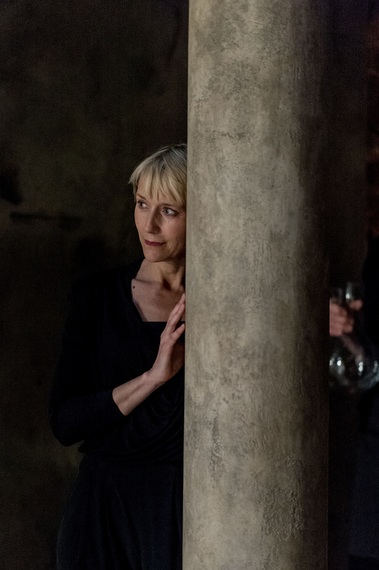 Lia Williams in Oresteia. Photo: Manuel Harlan
Williams takes top acting honors with a blood-curdling performance. She is well matched by Wright, who is gut-wrenching in the scene where Iphigenia is sacrificed. (This pair looks and acts like they could be playing the leading roles in "House of Cards," and I imagine that is not altogether coincidental.)

Ickes' Oresteia provides a bracing smack-in-the-face for theatergoers looking for an emotionally rousing experience, and an unforgettable one at that.
.