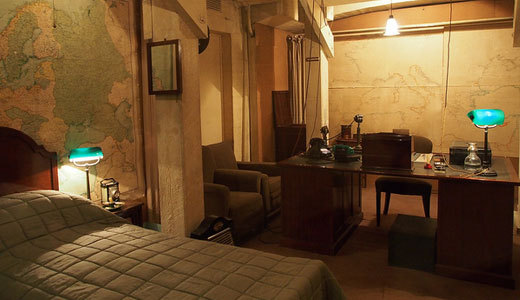 I am in London. I have come largely on Churchill business. My daughters, Lea and Sara, are with me, sharing the singular pleasures that are to be savored seeing London through a Churchillian prism -- as well as other fun stuff.

Touring The Churchill War Rooms with Phil Reed as our guide was one such pleasure. Built in 1939 as the Cabinet War Rooms, the complex comprises the bunker built beneath Whitehall for Churchill and his cabinet to hunker down in. The War Rooms today are one of London's top tourist attractions (by crowd numbers, I am told). Phil Reed is the longtime director, as well as the driving force behind the terrific Churchill Museum added on in 2005.

The War Rooms were hastily completed some few days before England declared war on Germany. Though never quite so bomb-proof as advertised, they certainly constituted ground zero for Britain's wartime braintrust during the Blitz. Churchill slept here, but only for a sum total of three nights. He detested being underground when all the action was upstairs. Today, his eloquently ascetic little bedroom appears just as it was, right down to the thin, green, bedspread and the bedpan on the floor below it. The BBC radio microphone on the desk nearby saw more use ultimately than the bed; Churchill delivered four broadcast addresses from this bedroom.

With characteristic elan, Phil invited Lea and Sara to freely explore Churchill's boudoir. He let them sit at Churchill's desk and deliver their own orations into the microphone. He also asked them not to sit on the bed.

My girls were, of course, enthralled by this very tactile proximity to history. Phil next marched us to the Map Room. There, the pins marking the courses of fighter planes in the air and ships at sea remain precisely as they were at war's end when the War Rooms were victoriously abandoned on August 16, 1945, to be reopened and restored as a museum in 1984. Sara lifted the receivers on a few of the many colored phones and was astonished by their heft. Lea marveled at a single lump of sugar in an open ration packet on the table beside one of the officer mannequins. The lump and packet actually had been left behind on this table, Phil informed us, and have resided there ever since.

We now followed Phil to the Cabinet Room itself. We watched him unlock the door.

"This is the room from which I will direct the war," Churchill had intoned upon seeing the place for the first time in May 1940. His War Cabinet would meet here 115 times, usually as bombs fell overhead.

The cramped, squarish maze of baize-covered tables appeared as undisturbed as that sugar lump.

"Go sit in the big chair," Phil said to Lea and Sara (and to me). "Churchill's chair.

"Grip the ends of the armrests," Phil instructed. Lea did.

"That side is gouged from Churchill's finger nails," Phil explained. "The other, with the deeper cuts, those are from his ring."

Nothing could better bring home the enormity of Churchill's task and the fearful power of that room. We all gaped.
~
Next: Churchill's Tailors