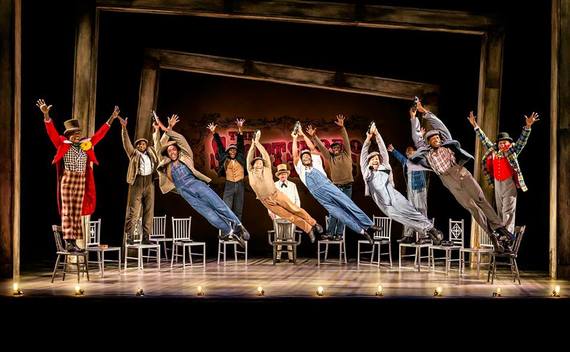 In June of 2013, I wrote about the impact of theatre on history, how Kander & Ebb's musical The Scottsboro Boys had helped change history. By telling the story of the nine black teenagers who were wrongly accused of rape in Alabama in 1931, national attention was brought to the travesty of justice that helped spark the American Civil rights movement and led to two seminal Supreme Court rulings. In April 19, 2013, 82 years after the Scottsboro boys were arrested, the Alabama legislature had universally approved the passage of The Scottsboro Boys Act, exonerating the boys. How apt were Kander & Ebb's lyrics "what was a whisper is now a roar."

The following November of 2013 'the roar' grew even louder when the last three boys were pardoned. They were pardoned the same day the production was happening at the Young Vic Theater, in London. Just as the mother of one of the boys, Ava Wright, had traveled to London in 1932 to bring attention to the boys' plight, so The Scottsboro Boys journeyed to London in 2013 to share the production with a broader audience outside the United States.

Though the story is clearly an American tale of racism against blacks, London embraced the show. London understood it was a tale of injustice, prejudice, of what is right, of what is wrong. And London responded to the brilliance of Kander and Ebb's music, Susan Stroman's direction, David Thompson's book. They responded to a difficult story being told within the context of a bold, entertaining musical.

At the Young Vic, The Scottsboro Boys was sold out and extended, playing to standing ovations every night, not something that is typically done in London. We were honored to receive five star reviews and win the Critics' Circle Award for Best Musical and to receive six Olivier nominations.

With fellow lead producers, Paula Marie Black and the Young Vic, and a committed producing team, we then moved the show to London's West End Garrick Theatre in October, 2014 for a 20 week run. We were again deeply humbled, winning the Evening Standard Award for Best Musical and receiving an unprecedented number of five stars reviews.

Most important, and what is most gratifying, this American tale has touched the hearts and souls of Londoners. There is nothing more important and meaningful to the producers, creatives, cast and all involved to get countless emails and tweets expressing how the production moved and inspired people, particularly the young people. Many came back two and three times. The following aren't the critics' professional reviews, but words from individual audience members.

One underprivileged, white youth said 'he discovered there was a world he'd never dreamed of, that someday perhaps he would be able to do something with his life, that The Scottsboro Boys cast made him feel that anything was possible if you had courage.'

The following email is from a 15 year old boy. Amazingly enough, his surname is Leibowitz, the name of the famous Jewish lawyer who helped save the Scottsboro Boys. What he wrote captures so beautifully why theatre must be done:

I think it was about ten minutes in that I was caught, aware that something was going on inside me, that I was being changed somehow... I had left the house as one person and had came home as another.

I think what you have done is allow me to understand the weight of history, the horror of racism and the importance of remembering. That is part of me anyway as my Grandmother had to flee Germany in the 1930s and now I understand about other atrocities.

Thank you so much for everything you have done for me in bringing The Scottsboro Boys to life. It is now and will be forever, a part of me.

The way in which this most appalling story was told, using music, satire, comedy, pathos and drama, was brilliant. The show evoked so many emotions, anger, outrage, laughter...sympathy, helplessness, amazement and enjoyment. In over 40 years - the best (show) we have ever seen, nothing else comes close.

"Theatre is about being amazed and learning something. SB certainly fulfills that... wish it could go on...

I need to shout about the SB! Jaw dropping, bone-chillingly incredible. Was smiling and toe-tapping, then shaking and sobbing. Wow!!

This Saturday, Feb. 21, after nearly 100,000 people in the UK have experienced this extraordinary production, London will be saying goodbye to The Scottsboro Boys.

London, we thank you for opening your hearts. The show played more than twice as long in the West End as on Broadway. At one of our emotional talk backs, one lovely American young student said with tears, "Please. Bring the show back to the US. We need it." Perhaps now is the time for the show to return. Happily many cities have expressed interest in bringing The Scottsboro Boys to their theatres including Washington, D.C., but no dates have been confirmed as yet. With the success and timely importance of The Butler, 12 Years a Slave and now Selma, maybe it is time for The Scottsboro Boys to tell their story again in the United States.

At the end of the show, the cast sings "Say Goodbye to the Scottsboro Boys." It is an entertaining, show biz, but powerfully complex number, infused with anger. It grabs the audience. The actors have done what they have set out to do. They have told their story their way. This time they have told the truth. They have made us laugh until we cried. They are challenging the audience. Say goodbye but, 'Don't forget us!' And we can't. The story of racism is not over. On Feb. 17, just a few nights ago in Paris, white Chelsea sports fans refused to let a black man enter the train, shouting racial slurs.

In the US, there is a new nine: The Central Park 5, Trayvon Martin, Eric Garner, Michael Gross, Akai Gurley. But these are only the names in the papers now. Unfortunately, there will be another new 'nine'.

The Scottsboro Boys leaves us with the one clear message about what is right, what is the truth, what must not be forgotten. Now it is up to the audience to remember.