Authorities say one person is dead and at least 10 are injured after a man drove a vehicle into a crowd of pedestrians near a north London mosque that had just completed evening prayers.

The incident, which occurred shortly after midnight on Monday, is being investigated as a potential terrorist attack. Police said it was “too early” to determine if the victim, who was already being given first aid at the time of the assault, died because of the attack or of an unrelated issue.

The suspect was identified Monday as Darren Osborne, according to several news outlets. Authorities say the man was detained by members of the public at the scene before his arrest and was later taken to the hospital as a precaution.

Originally from Somerset, the 47-year-old Osborne lived in Cardiff, Wales, with his partner and four children. “I’ve seen him walking in the street but never spoken to him,” neighbor Pauline Tibbs, 48, told The Telegraph. “He seemed normal enough.”

The incident occurred near the Muslim Welfare House, a community center down the road from several local mosques, according to the U.K.’s Muslim Council. The mosques had been holding evening prayers for the holy month of Ramadan and were likely to have hosted hundreds of worshippers over the past week.

Metropolitan Police Commissioner Cressida Dick said the attack was “quite clearly an attack on Muslims.”

Cmsr: “#London is a city of many faiths and many nationalities. An attack on one community is an attack on all of us." #WeStandTogether

A HuffPost UK reporter witnessed police detaining a second person several hours after the collision. Authorities declined to comment on the reason for the arrest.

Cynthia Vanzella, a woman who lives near the scene, told CNN she heard the collision from her home and went to a window to see people “desperately trying to make some signs to a police car.”

“I saw a lot of people injured,” she said. “They were helping on the pavement and trying to help them to get to the scene.”

“The gentleman went straight down this road, people were just conversing, talking, just doing what we’re doing. And he just came into all of us,” a witness told the Press Association.

The chairman of the Finsbury Park mosque, Mohammed Kozbar, described the incident as a “cowardly attack” and said there were many injuries.

There was confusion and dismay among witnesses and bystanders in the aftermath of the incident. Anxious crowds gathered at police cordons surrounding the area to wait for news.

“One thing that is clear: This happened after night prayer that us Muslims pray during Ramadan,” a witness told HuffPost UK. “It was clearly an act that was planned and an act that was done with full intention.”

Miqdaad Versi, the assistant secretary general of the Muslim Council, said the incident reflects growing fear within the community about a rising tide of Islamophobia in the country. “People have been worried about this for a long time,” he told HuffPost.

“People are shocked. People are terrified,” Versi, who was not at the scene, went on. “It’s an important time. It’s the last 10 nights of Ramadan, and that’s why there are such big crowds.”

In a statement early Monday, the Muslim Council’s secretary general, Harun Khan, condemned the rise in anti-Muslim sentiment following a series of high-profile terrorist attacks in the country.

“Muslim communities have been calling for increased action to tackle the growth in hate crime for many years and transformative action must now be taken to tackle not only this incident but the hugely worrying growth in Islamophobia,” Khan said.

“This is a terrible incident,” British Prime Minister Theresa May said in a statement. “All my thoughts are with those who have been injured, their loved ones, and the emergency services on the scene.”

“My thoughts are with those and the community affected by this awful event,” he said in a statement.

Thoughts & prayers with all those affected by the horrific terrorist attack on innocent people in #FinsburyPark. https://t.co/H85QpLdcbd

London Mayor Sadiq Khan condemned the incident in a statement posted to Facebook early Monday, describing it as a “horrific terrorist attack on innocent people.”

“We don’t yet know the full details, but this was clearly a deliberate attack on innocent Londoners, many of whom were finishing prayers during the holy month of Ramadan,” Khan wrote. “While this appears to be an attack on a particular community, like the terrible attacks in Manchester, Westminster and London Bridge, it is also an assault on all our shared values of tolerance, freedom and respect.”

Khan, May, and Corbyn all visited the scene of the attack on Monday. May held a meeting with leaders of various faiths inside the mosque.

Ivanka Trump, the daughter of and adviser to President Donald Trump, tweeted on Monday that, “we must stand united against hatred and extremism in all it’s ugly forms.” The president did not immediately issue a response.

“We’ve made it very clear to our British allies that we stand ready to provide any support and assistance that they may need,” White House spokesman Sean Spicer told reporters at a briefing.

Sending love and prayers to the victims in #FinsburyPark London. We must stand united against hatred and extremism in all it's ugly forms.

Monday’s attack is the latest in a series of incidents in the country involving vehicles hitting pedestrians and comes at a turbulent time for May.

In March, four people were killed and dozens were injured after a man drove his car into a crowd on Westminster Bridge and then stabbed a police officer. On May 22, a suicide bomber killed 22 people following a concert by Ariana Grande in the Manchester Arena. And in June, men driving a van plowed into pedestrians on London Bridge and then began stabbing people in a popular market, killing eight. 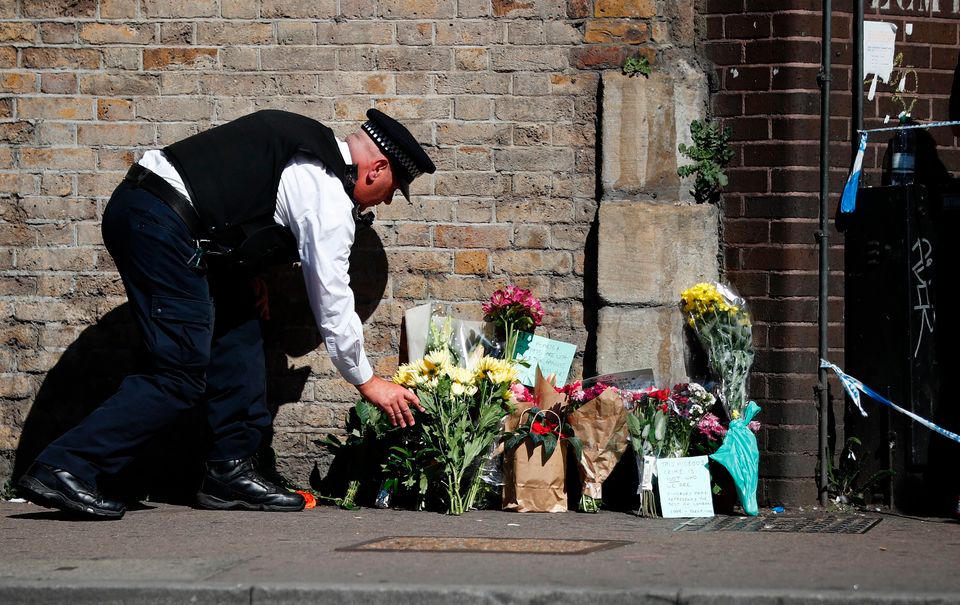