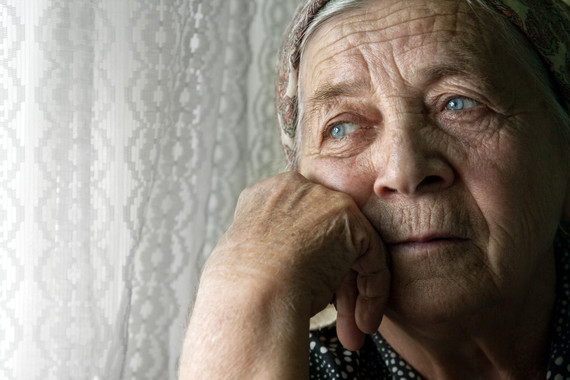 I've never met Leslie Delamater Anderson Aitken, but we're friends on social media. We're both in our 60s, we like to write, and we've been stand-up comediennes. However, her life didn't turn out as she planned, and now she writes about dealing with loneliness. She relates this story as a reminder for us to reach out to those who didn't receive flowers and gifts on Valentine's Day. She calls it "Fading Away."

I was 23 and married for a year when we moved to our first house in 1976 in southern California. Across the street, an aging widow lived alone in a tiny home only 650 square feet that she and her husband had built in the early 1930s. Her name was Avie, she was in her late 70s, and she had lived alone for more than 40 years.

She was short in stature, partly because of a severe curve in her spine, probably due to osteoporosis. She had been quite the gardener in her day. There was a big blue spruce in the front yard, a rarity for the area, and also a Cedar of Lebanon in the back yard, a persimmon tree and a black walnut tree, along with many very old rose varieties. She even had some lilies of the valley and a couple of rare Jack-in-the-Pulpits.

I would wave at Avie when I saw her outside wearing her big sun hat and watering her yard while balancing with her cane. I said hello a few times, but never really spoke to her other than the occasional greeting. One night her house was broken into by a couple of young thugs who knocked her to the ground, put a love seat on top of her, and stole a can of pennies. They fled out the back door, leaving it open.

A neighbor heard her very faint whimpers, and he told me later he thought it was a cat under her house. He found her and called for an ambulance. Avie never returned to the little house that she built and shared with her husband and where she planted her gardens. She went to a nursing home and passed away the following year.

Through the years, I've thought a lot about Avie, and I felt guilty because back then I was young and too busy to reach out to her. I should have stopped to talk with her as she worked in her yard and I never considered the many days and nights that she spent alone, never wondered if she was lonely, never asked if she needed any help with anything.

Now my children have grown up and moved away, and I am divorced. I have only left my house twice in the last two weeks, and in that time I have only talked, in person, to two people who know me. In that same two weeks that I have only eaten two meals in the company of other humans. Those were when I was so lonely for human companionship that I went to eat at a restaurant, not so much for food, but just to be around other people and to hear other voices than my own talking to myself or my pets.

Have I inadvertently picked up the long forgotten baton of solitude left behind by Avie Abbot? How did this happen to ME? And is this how we start to just fade away into the oblivion of someone that people used to know? I'm reminded of a verse in a familiar song: "I am ... I said to no one there. And no one heard at all, not even the chair."

Many well-intentioned people have suggested that I volunteer for various organizations and community activities. For many years I traveled that route, "busying" my life with hours of volunteering my time to parent-teacher associations, school functions, and Girl Scout meetings. I increased my services after my children moved away and after my divorce as I tried to fill my hours with "doing things." I was running as fast as I could from the reality that there was no one home when I got there, and that there was no one coming home "later" either.

There is something weird about all the years I donated my time and energy. There are dozens of groups that welcome the willingness of others who give hundreds of hours of their time and gladly soak them like a dry sponge. But if you stop giving, no one reaches out, or even seems to notice. It is like you were there, and thought you were making a difference, and then just fade away, unnoticed. In all of the years of volunteering, fund raising, parking cars, selling programs, organizing bake sales, delivering cookies, planning events, catering teachers luncheons, I can honestly say that I never made one real friend. Oh, I have lots of acquaintances and people who know my name. But at the end of the day, very few who know my phone number or would think to reach out.

I am only 62, but the thought of a long future filled with vast amounts of companion-less days and weeks feels like cruel purgatory. I will no longer engage in self-serving, busy endeavors to make me feel less lonely. I guess I have lost my motivation, but am not quite ready to fade away. Dear Avie, I should had stopped to talk with you.