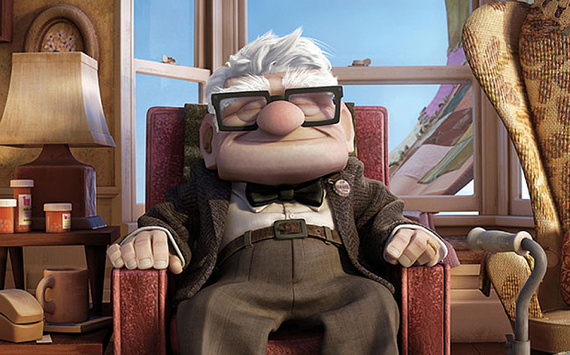 One of my all-time favourite films is Up by Disney/Pixar. I cry every time I watch it and my heart goes out to Carl Fredricksen, the old gent who lives alone. His sadness at being alone is palpable. The film-makers touched upon a subject that is a stark reality for many.

According to the recent report The Emerging Crisis for Older Men there is likely to be a rapid increase in the number of 'Carls' in our society. The report highlights the growing generation of older men that are facing a future of increased isolation.

The report found that, whilst women are still more likely to be widowed, the number of older men living alone is increasing, indeed projected to rise by 65 percent between now and 2030.

Why are men suffering more from loneliness? Simply put, women are better at aging than men. They are more likely to go to the doctor if they are ill and often enjoy cooking and socializing more than men do. They will chatter about problems or engage with others and are good at looking after themselves. Men are also less likely to get involved in preventive health-based activities and use less community health-based services. Men are less likely to talk about their feelings and this in turn exacerbates the feeling of isolation.

The findings also reveal that because many men rely on their wives for social contact they encounter a greater chance of suffering from loneliness and depression than women do when they are bereaved.

I have long been championing the case that men facing retirement or indeed those over the age of 50 need to take time out for themselves, grow social networks and get involved in hobbies or activities that get them out of the house. It is not just important for their own mental and physical health but is essential for a better older life and to prevent the concerns raised in this report.

So, here are five suggestions to help you combat loneliness:

1. Make your own friends.
It's too easy to let the other half sort out your social arrangements but make sure you have at least one night a week out with 'the boys' or doing something for yourself. Men often only have acquaintances from work or family in their social network. Take up activities that allow you to grow those networks. If you are a proper grumpy and don't want to get involved with others, get a dog. A dog will be a good companion and helps combat feelings of loneliness. It will also help keep you fit.

2. Find time for the things you like doing.
There are so many activities you could take up that there is not enough space here to list them all. If you are really struggling to think of anything, let me know and I'll send you a list of over 700 suggestions.

3. Get in touch with your feminine side.
Like it or not, you need to open up about your feelings. Men's inability to open up about their feelings is one of the major causes of isolation. It's perfectly acceptable to talk about yourself and your anxieties. (Take a quick look at the post If Men Were More Like Women.)

4. Smile.
No, don't scare people in the street by grinning wildly at them. I mean try to be friendly and nice, even if it is hard some days. People tend to be nice back and will be more likely to visit or help you out than if you are a grouch. No one wants to have a chat and a cup of tea with a grumble guts.

5. Get online.
Well, if you are reading this, you probably are already au fait with technology. The Internet can be a lifeline to the outside world and give you contact with people. You can contact people all over the world, leave comments on blogs and chat online. The best part is if you get fed up with them, it's easy to turn the computer off.

Loneliness is not a topic I treat lightly. Feelings of loneliness lead to all sorts of health problems and misery. Make sure you seize opportunities now. You don't want to be like poor Carl in Up. Get social and leave your comment here.