It all began with a night of sex tourism in Thailand. Lonely Dane X admits to the camera that he met his future wife, Sommai, on a holiday tour in Pattaya, where he went alone to satisfy some needs that were not being met in Denmark. Now married fifteen years, his wife Sommai--a serene beautiful woman with a wise and steady gaze and no mincing of words--is absolutely content with the arrangement. Moreover, she is generous. She has become the grand madam of northern Demark, helping young Thai women, eager for financial security, place ads in newspapers to find their Danish husbands, the latter as eager and desperate as they.

575 Thai brides now live in this Danish community by the North Sea, when before Sommai's arrival, there were none.

How do these alliances work out?

Like a fairytale. Director Janus Metz new documentary Love on Delivery, screened last week at the Thessaloniki Documentary Film Festival, follows four Thai women (including Sommai) as they make arrangements for a new bride, trying to initiate her into the program--a program that seems destined to lead to happiness.

The girl, young beautiful Kae, seems a bit reluctant and wary at first, shaking her dark hair out of her eyes, especially when she meets her hulking blonde suitor, grinning from ear to ear, a man who just moments before was confessing to his mother "that nothing has ever worked out for him" and his hope that this would. The Danish man, age 38, has not had a girlfriend for ages it seems--as his own dominating mother implies as she says: "I can't believe you still can't manage to get a girl!"

We then watch Kae--this sexy pretty girl with a cautious look--and the Dane--grinning oafishly--as they eat breakfast together in the man's suburban home, facing a dead-calm Nordic window--in silence, as they have nothing to talk about.

Then the Group gets mobilized. The clutch of Thai women shows up to give Kae a great pep talk--and lessons in how to be a Dane's wife:

"You say 'good morning' in the morning. And 'good evening' in the evening. With a kiss, like this. Don't forget the kiss."

Also Kae is told that if at a loss for conversation, she should say: "Does it taste good?"

Indeed, during the breakfast, after a long silence, she gestures to the man's plate and says: "Does it taste good?" 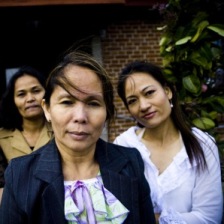 We cross-cut to follow another Thai woman, Basit, as she pleads with her new husband--twenty years older--to start putting in the paperwork for her little boy to emigrate to live with them: one of the main reasons she agreed to the marriage. The man looks uncomfortable. "Not yet. You're not ready. You just got your job. Next year, we start. Yes, yes, next year."

Eventually--as the film shows us--he does agree to accept the son: coughing up the dough for the legal procedure as stern Thai women point to him in front of a judge and command: "Go get the money!" He must hold up his manly end of the bargain.

Metz alternates between frank discussions with the Thai brides (as they study how to be a Danish housewife, or take classes in the language) and the Danes discussing their years of prior loneliness. We learn that this one Danish man had been in a deep depression for eight years, hooked to a daily cocktail of anti-depressants, looking forward to very little ever since his wife left him (a depression betrayed in the slouch of his paunchy stomach, and the downcast wrinkles under his eyes).

Then he saw a picture of this Thai girl---Basit, the one who later pleads to have her son with them.

He brightens as he explains the spur to his marriage. "I know it is hard to believe that you fall in love with a picture. But I did." And he decided he wanted this woman as his bride.

Cross-cut: Kae meanwhile still seems reluctant to jump on the bandwagon--but moments later, in a touching living room scene, where the Danes and Thais are congregating, her already married cohorts nudge her and say: "So Kae! What is it? Tell us your decision!"

Kae bursts out into a surprising little girlish grin: "Yes!"

"Kae knows what she wants," director Janus Metz told me over breakfast in his hotel--when I objected that maybe the stunningly attractive intelligent Kae would like to experience a more "in-love" marriage than that with the jolly giant.

Metz insisted: "Kae is not a young girl. She is 32. She has a child already. She knows what she is looking for. She is happy with what she can get from this Danish husband." 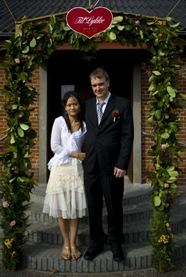 As for the Danish husband: he is thrilled. "The first weekend spent with Kae was the best time of my entire life."

What is interesting in this film is that the two sides are absolutely clear about the variance of their motivations. Sitting on the back of a moped, one Thai woman speaks about how she really needs this marriage to work so as to support her family in Thailand: the husband is her ticket to financial security and family well-being. Then we switch to a Dane speaking about his desperation for female affection.

"But isn't it dangerous to show these marriages as such a win-win situation?" I asked. "After all, there might be some painful stories for the Thai women who are making choices based on economic disadvantage."

Metz responded calmly: "We already know those kinds of stories about abuse. We didn't want something black and white. I like the ambivalence. Besides these people are lying low already: we are dealing with lonely men and poor women, why kick them when they're down? They are already lying down. Who's to judge if it's good or bad, this lst world connection with the 3rd world? It's also globalization."

The greater subject behind his film, he noted, is globalization. He explained that he likes to use migration as a stage, as a bigger image for the relationship between first and third world countries.

"And of course, it also turns out that in my film the marriages in our film are all successful."

Why the fairytale plot?

"Because a fairytale is the perfect narrative structure for these tales. When you analyze a traditional fairy tale, you have a hero who is going to make a journey, who needs to become himself, find his sexuality, find himself. A process of becoming."

Indeed, the inspiration for the fairytale plot came from having made a previous documentary about African migrants crossing the Mediterranean. "Here, it was a question of seeing migrants not as victims but as people who take a very active decision about their lives and actively try to take a role. When I worked with African men, I saw them venturing into the world to make a difference for themselves and their family."

"The migrations reflected that narrative. They are an active act of becoming, based on trying to plunge into modernity, going from a culture based on the communality to the individuality driven culture of Western societies."

Metz was also influenced by anthropological theory which deals with rites of passage: how an individual becomes a new person through social death and rebirth.

Sommai's name, in fact, means achievement in Thai. She is the fairy-godmother in the story, the one who helps these girls place the ad that says "looking for a decent husband."

Nevertheless--although the film does not dwell on this dark side--there must also be unsettling realities to the Thai-European relationship. I saw it myself in an airport in Bangkok, when sitting curbside waiting for a taxi, I discussed travel highlights with a gleeful overweight 65 year old British businessman, as his Thai "girlfriend", aged 20, sat bored (and ignored) next to us. It was she who had plodded around behind him as he traipsed on his Thai adventure tour over the last four months, and she had nothing to say except scratch her fingernails against her bare thighs.

"This is an ideal life," the businessman told me, comparing it to his divorced middle class existence in England, where his children complained about his irresponsible ways. "Here I am a king."

The sequel of Metz' film, Ticket to Paradise, does delve into this more sordid reality: not only does it continue the stories of Kae, Sommai and Basit back in their home country, it features a new young Thai girl who, stifled with the lack of opportunities in her village ("it is known that Thai men can offer nothing to the women"). decides--upon the encouragement of her mother--to go to "Pattaya", a synonym for becoming a prostitute. In this city, she soon learns the tricks of the trade, and within months is giggling about "pussy" with one of her colleagues in a bar. 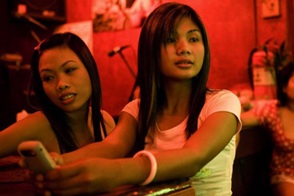 She has now taken charge of her life.

The director and his assistant, anthropologist Sine Plambech, confided to me that although they do not emphasize it in the film, it is true that the life of a girl prostitute is a tough one.

"They are like line dancers: they can fall down all the time. They are fragile, treading a fine line: if a customer doesn't want to pay, or if they are beaten up, or become pregnant. They have tons of problems. They are vulnerable."

Indeed, the girl--initially taken with her exciting new life as a hooker--does have a moment of faltering.

Then the older Sommai has a motherly talk with the girl. Even she, it turns out, started in Pattaya.

We all have to start somewhere, this wise woman states boldly.

She is proud of what she has achieved, for herself and her community.

In her own eyes, she is not a victim--and this is the beauty of Metz' offering.