Art can garner the reputation of being lavish, sophisticated and all around posher than you. But what if we told you that even sculptures participated in the universally best/worst time suck that is trolling Tinder?

Today we're looking at Australian artist Tully Arnot's "Lonely Sculpture," a piece that comments on the ubiquitous dating app and its effect on contemporary society. The sculpture is comprised of an iPhone (mid Tinder usage) with a lone finger that keeps swiping right again and again, sometimes before the next image even finishes loading.

The darkly funny work blurs the line between man and machine, a division that grows less and less rigid as our lives become increasingly dependent on digital technology. The silicone finger, removed from its human body, depicts the isolation and reduction set in motion by our haphazard technological habits. The finger is a lonely judge, tapping yes to every potential suitor that appears, its growing desire only leading to increased detachment.

Arnot's piece illuminates the uncanny connection between bodies and screens in today's world, and the large roles both play in constructing an identity. "In embracing technophilia, the human body and the parameters of self are blurred," writes Luke Letourneau on Runaway. "This is not only the case with individuals defining themselves, but also in the interaction with others. Computers, televisions, and mobile phones: these are our screens."

"We live our lives between and through these monitors. We are never without a screen. Our embodiment is negotiated through them. We connect, and we disconnect, but we are never disconnected. In traversing multiple realities simultaneously one also traverses multiple identities. However, is a constructed, or re-constructed, identity an authentic one?" 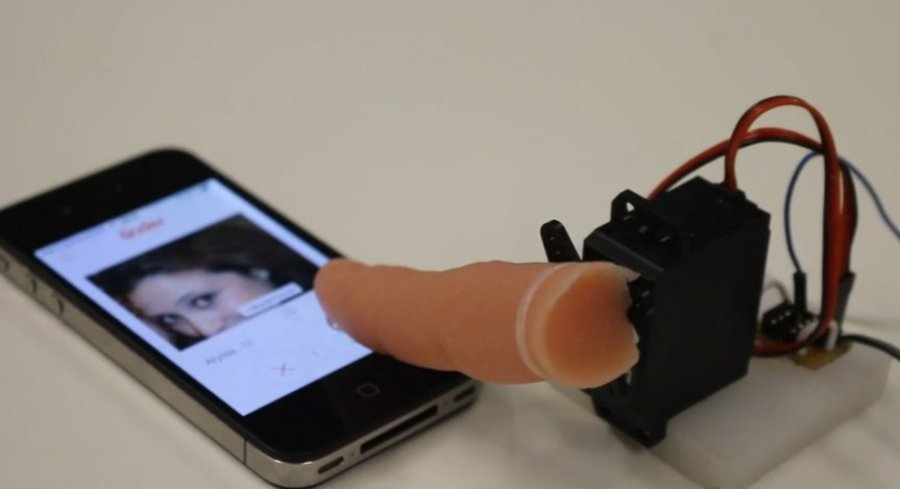 Does Arnot sculpture make you laugh or make you want to de-activate all your dating profiles ASAP? Let us know your thoughts in the comments.