"Your hair is really -- pause - long, don't you think?" said a girlfriend the other day while gliding her fingers demonstratively through her own neat and practical chin-length bob.

"Too long!" was what she really meant, with that little addendum "for your age" in mind that follows a woman over 50 around like a homeless puppy. But since she knows me well and wants to live, she cleverly skipped it.

But there it was: The warning. The limitation. The control. Brought to us by UNITED HAIRLINES, that secret organization of ruthless hair-tamers whose strict rules will not allow any hair frivolity on older women, like hair that moves and actually looks alive. What nerve some of us still have! What's next? A mind of one's own? Boundless confidence and drop-dead style?

I have long gray hair and I love it because it looks good, is well-tended and easily manageable. The length is perfect for all kinds of hairstyles, like ponytails, fancy upsweeps, even braids. I'm lucky, of course, I'm a freelancing creative creature and would get away with a razor-cut like Pink's (who I totally adore), but pity the not-so-young women with powerful jobs in politics and corporate America. Because their days are bad hair days forever. One cut fits all.

Of course, we've all noticed that Hillary Clinton (68) presents herself for months now with the classic helmet hairdo that is supposed to project that she's about nothing but business; it even looks to me as if the hair gets frightfully stiffer by the week. After a few freewheeling seasons of nice-looking hair that grazed her shoulders she's back in the firm grip of UNITED HAIRLINES' helmet-hair-headquarters that already put the hairspray on a long line of female politicians from Maggie Thatcher to Angela Merkel. You are only as credible as your hairdo.

The truth is that the length of hair isn't supposed to match the type of person a woman is, but rather the years she is on the planet. Once you hit 50 you are automatically enrolled as a member of UNITED HAIRLINES. Because that's usually when "older" women are supposed to shorten their hair to a bob, so that nobody will mistake them for Beyoncé or Rapunzel. Apparently, something is still "wrong" with hair that grows well past 50-plus-year-olds' shoulders. This is only topped by being gray and long-haired -- which is pure provocation.

I find it perplexing and almost funny that five inches longer than the prescribed "modesty law" for hair gets many people as angry as if these women have betrayed society and revealed themselves to be practically hair sociopaths that need to go to re-training camp. The whole thing is a sad ritual that reeks of censorship and penitence. The sacrificial lamb. The robbed hair. Whenever women are too wild, too independent, too intelligent -- the reaction has always been: off with the hair, literally cutting them down to size.

But enough of hard-hitting disturbing questions. The real question is here: why on earth would anybody want to have short hair at any price and emanate brisk efficiency by giving in to a dowdy do like poor Hillary Clinton's, no matter what age? No, there is no law against short hair! We are not talking stylish pixie-cuts a la Sharon Stone, or Helen Mirren's always-reasonable bob. Rather we are talking too well-behaved, invisible hair.

IF there is something like "too long hair" at all, then it has rather something to do with proportions and hair quality, not with age or conventions. I would always follow a simple rule: as long as you have a full head of hair, enjoy it while you can! Especially, since it is well known that after menopause hair tends to go into retirement and hangs around lazily like a pensioner before his nap. For that reason alone one should treasure great hair.

Luckily, we see an increasing amount of these stunning and confident women with longer gray hair -- smartly cut, worn with panache. To them it translates into pride, experience and chic.
And since no woman is an island, allow me to introduce most men's views on longish silver manes: they love it. So, go for it, cancel membership at UNITED HAIRLINES, take off the helmet, let your hair grow and let it flow. 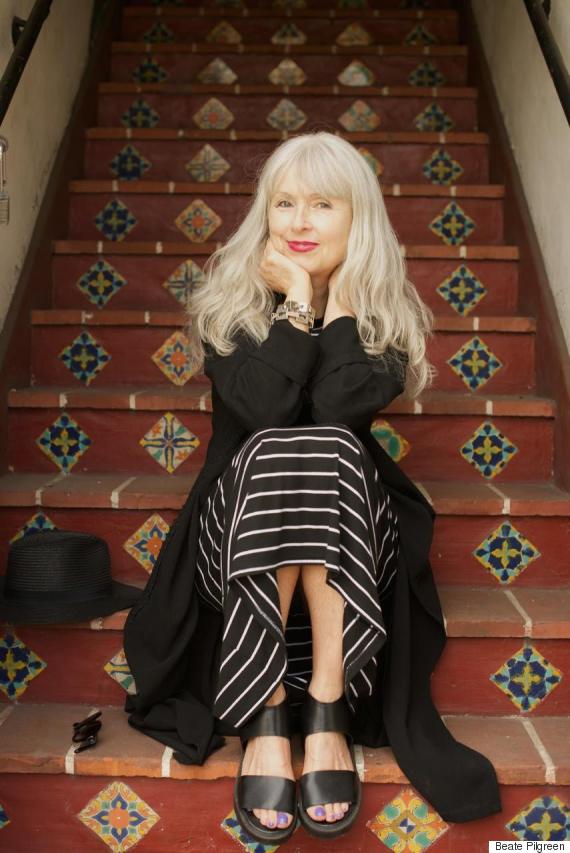