By Ally Marotti for the CheapTickets Blog

Long layovers can be a real drag, but they certainly don't need to ruin the trip. Venturing out of the airport can add leaps and bounds of enjoyment to your travels, and it's pretty easy to keep the cost down on your hiatus from the terminal. Just make sure you plan ahead and pack whatever you may need for the adventure in your carry-on, and you should be all set for an enjoyable day away from the airport monotony. Here are five ideas for cheap getaways outside of some major airports:

This one is easy -- spend the day on the beach. Have the cab driver take you to Hollywood Beach. It's not the closest one to the airport, but it's the most happenin'. In about 15 minutes, you go from drab airport life to the tropics. Watch the sunrise over the ocean and grab breakfast beachside at Broadwalk Restaurant and Grill. There are plenty of dining options, ice cream shops and convenience stores along the boardwalk if you need anything like sunscreen. Listen to the Cuban music and bask in the sun during your layover, and make sure to grab a piña colada at Greek restaurant Sahara International.

If you don't have a layover at O'Hare, it's highly likely your flight out of Chicago will end up getting delayed. O'Hare is an airport known for its delays, partly because it doesn't have enough gates, and partly because Chicago weather is entirely unpredictable. Lucky for budget-conscious travelers, there's a train that goes right downtown for only $2.50. The Chicago Transit Authority Blue Line train runs between downtown and the airport constantly throughout the day, and it's only a 40-minute ride either way. Check out the sights, sounds and food Chicago has to offer for the day rather than sitting in the airport bitter about the delay. For free activities, head to one of the city's beaches or walk along the recently renovated Riverwalk along the Chicago River. If you're there on a summer evening, there are free concerts at Pritzker Pavilion in Millennium Park on Mondays and Thursdays, and free movies there on Tuesdays. For cheap eats, head to the French Market in the West Loop--it's got everything from meatballs to lobster rolls.

The Atlanta airport is one of the busiest in the world, and so big it has its own zip code. If you have a layover or delay here, make sure it's actually long enough for you to safely get out, back and to your terminal on time, as there's usually some shuttling involved. If you are so bold to step into the unknown, take the Metropolitan Atlanta Rapid Transit Authority (MARTA) train, which costs $2.50 for a one-way ticket and will get you downtown in about 20 minutes. Once you're there, head over to the Jackson Street bridge between Cain Street and Highland Avenue for a photo opp (pics or it didn't happen). Stroll along the recently completed Atlanta Beltline, a 22-mile loop around the city of railroad tracks-turned-walking paths lined with restaurants and shops. Sample some of that southern cooking while you're at it.

New York City buses transport travelers from the airport to Manhattan for $2.75 each way. The M60 bus goes express to all LaGuardia terminals and drops passengers off near West 106th Street and Broadway. The Q70 Limited or Q47 will drop you off in Queens or Midtown. If you're willing to pay a little more, the NYC Airporter bus departs every 30 minutes and runs between the Port Authority Bus Terminal, Grand Central Station and Penn Station for $13. For a close to free day in Manhattan, stroll through Central Park and end up at the Museum of Natural History. They ask for a donation at the entrance. If you still have time and are craving some panoramic views of the city, swing by Salvation Taco. It shares a lobby with Pod Hotel 39 on East 39th Street between Lexington and 3rd avenues, has a great and reasonably priced rooftop bar full of Mexican beers and Spanish wines. You can get a beer and a great view for $8. 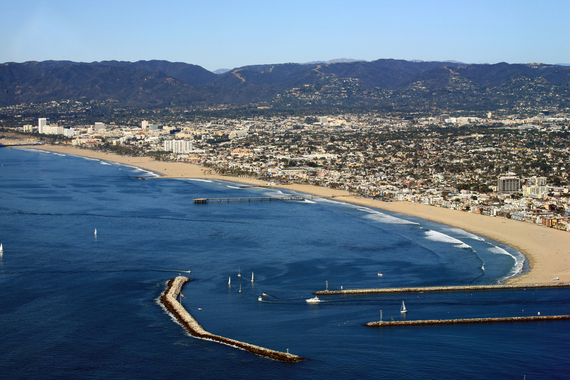 Los Angeles International Airport often acts as the gateway to Asia and Hawaii, and many a layover is whiled away among its terminals. But if you've got the time and you remembered to stick your swimsuit in your carry on, why not soak up some Vitamin D? Dockweiler State Beach is less than a five-mile drive from the Los Angeles airport. It extends south of Marina del Rey harbor, and is operated by Los Angeles County, so there are no entrance fees. You can take public transit there, but it'll probably be quicker to just grab a cab. Dockweiler beach is known for its hang gliding and plane watching (since it's so close to LAX), and offers a beautiful view of the sunset. There are fire pits on the beach that anyone can use, so if you have the time and money, swing by the store on the way and grab some hot dogs and all the fixins for s'mores for a true taste of summer.