It's Banned Books Week -- but no one even bans books anymore. So what's the point?

That was the upshot of "Banned Books Week Is a Crock," a September 28 Slate piece by Ruth Graham. She argued that Banned Books Week "traffics in fear-mongering over censorship, when in fact the truth is much sunnier: There is basically no such thing as a 'banned book' in the United States in 2015."

With book banning over, she writes that "instead of hand-wringing about a nonexistent wave of censorship, let's celebrate the obvious: The books won."

So is the fight against censorship really just one for the history books? As proud sponsors of Banned Books Week, we certainly think not. 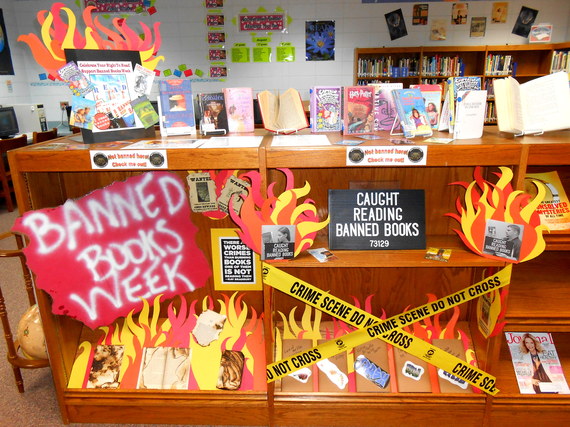 Graham is right that there's an important distinction between "banning" a book and filing a challenge to remove a work from a school library, a classroom or a summer reading list. The latter, she argues, is "part of a reasonable local conversation about public education." She adds that "even if you're firmly opposed to 'banning books' -- and I am! -- it's hard to argue that parents should have no right to weigh in on what their children read at school."

But this is a straw man argument. There is no serious argument that a parent should have no such rights. Promoting the freedom to read is more subtle, but no less important. Of course a parent has a right to express an opinion about a book, and even to ask for an alternative assignment for his or her child. But that parent has no right to determine what other students -- the children of other parents -- can read in class or in a school library. That is the goal of most book challenges. Even when a book challenge fails, it may still result in the removal of a book, sometimes temporarily, sometimes not.

Graham thinks several hundred cases a year isn't much to get worked up about. But those numbers are a very conservative estimate of the problem. As Chris Finan of the American Booksellers for Free Expression pointed out recently, the American Library Association believes that as many as 80 percent of challenges go unreported. A Freedom of Information Act research project in two states confirmed this; the vast majority of formal challenges are never revealed publicly.

And what about librarians or school officials who seek to steer clear of controversy by avoiding potentially controversial books altogether? There is no doubt that this kind of chilling effect is real. A survey of over 600 librarians released by the School Library Journal in 2009 revealed that 70 percent reported that the possible reaction from parents affected their decisions not to buy a book. About half of librarians reported that they had gone through a formal challenge, and 20 percent of them revealed that the experience affected their book-buying decisions going forward.

So there's strong evidence that there are far more challenges than are reported, and that those challenges affect institutions over the long run. Self-censorship, as the School Library Journal put it, is "a dirty secret that no one in the profession wants to talk about."

Over at BookRiot, librarian Michelle Anne Schingler recalls how even a challenge in a Georgia public library that 'lost' managed to create serious problems. "Libraries are a marketplace of ideas," she writes, "and if they're going to operate in a truly democratic fashion, all ideas should be represented." And that means making sure that voices considered unpopular or marginal are well-represented on the shelves. While things are in many ways better now than they have been in the past, she makes an essential point: "'Better than before' seems to me an inadequate measuring stick when we're discussing the availability of books, particularly in our schools and libraries."

And how did these free speech victories come about in the first place? And Huffington Post's Maddie Crum points out that Banned Books Week exists to "remind readers that information hasn't always been free." Indeed, if one really wants to argue that book banning is no longer a problem, we might want to give credit where credit is due: "Collectively, yes, the side of free information is on a serious upswing. But this isn't a naturally occurring phenomenon- as evidenced by our storied history of censorship, and the still-waging war against free expression happening elsewhere in the world." As Chris Finan put it: "Whatever the actual number of challenges, we can be sure that there would be many more if there weren't people all over the country resisting efforts to ban books. Booksellers have joined teachers, librarians, parents, students, and other concerned citizens in fighting back." That's exactly what NCAC's Kids' Right to Read Project does on a daily basis - fights to keep books in schools and libraries.

And consider the impact of book challenges beyond the world of books. They are a key part of a larger cultural battle over the control over what kids see, learn and create. Parental anxieties, disproportionately focused on the perceived dangers of contemporary culture, lead to attacks on "inappropriate" books-but do not stop there. They generate calls to police students' online speech, constrain sex education to "abstinence-only" and cut "controversial" material from high school art and theater.

Placing children and adolescents in a protective bubble is not only impossible, it is dangerous. To grow into thoughtful, mature and informed adults, young people need the freedom to explore the world in all its complexity.

So if Banned Books Week is about celebrating our victories, then by all means let's do so -- this week, and every other. And realize that there are more battles to come.