In my hood, we have a wide variety of personalities. Some nice, some warm and fuzzy, some prickly, some tangy, just like a big grocery store full of dispositions. We've got plenty of fruits and nuts, some twigs and berries, we've got it all. And it's a pretty decent mix, except for the rotten bananas. You know the ones I'm talking about, the kind who travel around with a black cloud of doom hanging over their head, much like Schlepprock from the old Flintstones cartoons. Wherever Schlepprock goes, he brings a gloomy darkness and bad things happen. Yeah, we've got one of those as well.

This is the type of person who frequently pees in your cornflakes in the morning. For the sake of anonymity and originality, we'll call our Schlepprock "Schlepprock." Our neighborhood Schlepprock takes pride and pleasure in the misery of others. If you're having a sunny day, fear not, old Schlepprock will come to your house and rain on your sunny day. Or try to if you allow it. But the key is NOT to allow it. You see, our Schlepprock is a lone wolf in a pack of happy puppies. And we happy puppies need not let our Schlepprock bring us down. 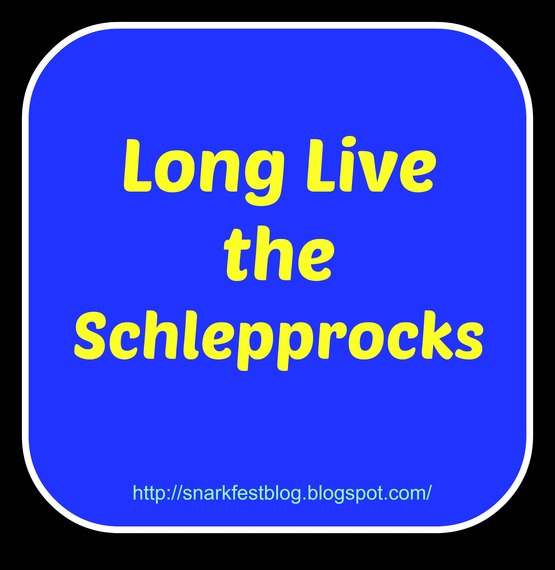 Let's take a look at some examples of our Schlepprock in action. Our Schlepprock enjoys making the ideas of others seem somehow wrong. Several of our neighbors toyed with the idea of sharing resources to save money in these difficult times and brought up the idea of possibly pitching in to share in garbage collection. Several other like-minded opinions were shared, yet Schlepprock poo-poo'ed these ideas, suggesting instead that we all just buy one big house and live together. When another sweet neighbor suggested that with the high cost of oh, I don't know, EVERYTHING these days, it sounds like we could ALL benefit from pitching in and that even dual-income households are scrambling to make ends meet. Well, apparently this is not the case at Casa Schlepprock. Schlepprock's spouse apparently makes plenty o'bucks so that Schlepprock can stay home and take care of the little Schlepprocks. I applaud Schlepprock's spouse and their ability to manage on one income but the idea of a two-income household is a ridiculous theory to Schlepprock. No, Schlepprock looks down from their high horse upon those of us who all have to go out and do all that nasty stuff called work. Ew. Schlepprock replied to this sweet neighbor by suggesting that said sweet neighbor wasn't home often enough to be a good mother to her own children. Yes, THAT little nugget pissed more than a few neighbors off.

More recently, we had another little conversation going about the positives and negatives of HOA's. This is a hot button topic among all neighbors, and all involved have valid points of view. Even Schlepprock. However, as someone famous once said (and no, don't ask me who, because I don't know. It could've been someone who works for UPS or FedEx, but don't quote me. Maybe it was Mr. McFeely from Mr. Roger's Neighborhood, he was the postman, wasn't he? Anyway, I digress) it's all in the delivery. Delivery is key. It's all about delivery. You deliver your point of view in a grown up, respectful manner and your opinion is treated with the respect it deserves. You deliver your opinion like an ass, and that's the way you'll be treated. Watch your words. If you tell someone that you like the HOA because you don't want to live with a dirt ball mentality, and if you want to live with a dirt ball mentality, go move to a trailer park, then you are going to be challenged. And if you backpedal and say there was no name calling, then you're obviously suffering from short term memory loss and you should immediately change your name to Dorrie and go find a whale to have a chat with in your quest to find Nemo. And if you FURTHERMORE refer to someone as a bitch because they ask you to tone down the name calling, you deserve any ass-whooping that comes your way.

We all know people like this. They are everywhere in every community, hiding in the woodwork like cockroaches. They piss us off and then act innocent. Their opinion is much greater and much more important than yours. Their spouse is better than yours, their milkshakes bring all the boys to the yard. I say good for them. Long live the Schlepprocks, for if they disappear, it'll make it harder for me to unleash my snark. And it's not good for the snark to be locked up for too long. One must not bottle up the snark. So thank you, Schlepprocks of the world! Because of you, I'm never at a loss for a good topic for a blog post.