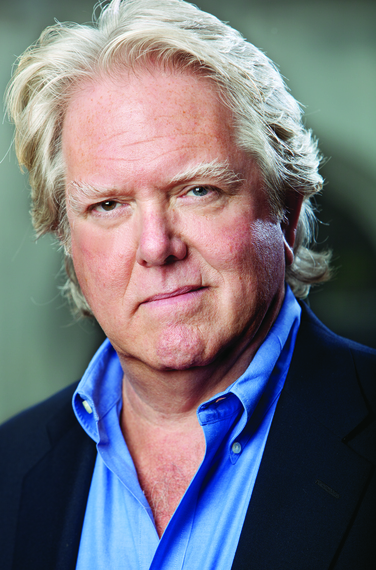 Michael Sears' financial thriller, Black Fridays was an award-winning debut novel. It was followed by Mortal Bonds, the second in the Jason Stafford series.

Before turning to fiction, Michael was a Wall Street veteran and managing director at two major brokerage firms. With his extensive and intimate knowledge of the sometimes-mystifying world of finance and Wall Street intrigue, he has written the highly successful Jason Stafford series of thrillers.

In Long Way Down, the third in the series, Jason has spent time in prison for financial crimes. Working as an undercover troubleshooter for a private investment bank, he is assigned the task of getting to the bottom of insider trading allegations against a bioengineer and corporate honcho, Philip Haley, who insists he's innocent of any misdeeds. Believing Haley has been set up, Jason goes about trying to uncover the truth. And, the truth can be dangerous -- even life-threatening.

How prevalent is white collar crime on Wall Street?

The issue of white collar crime is important in Long Way Down, and to me as well. Insider trading is a great example of it; and although not defined, it's very prevalent. Is it always a crime? These are some of the questions I delve into with these books. There are many honest people working on Wall Street. If there weren't, the entire system would collapse under the weight of its own thievery. I try to make this point in all my novels.

There is no legal definition of insider trading. It's not defined by statute. It's been defined by legal precedent. As was recently shown, insider trading ends up being what a judge determines it to be. There are specific things that constitute insider trading: an employee or director of a company who trades in his own stock ahead of shareholders, [or] has violated his duty to investors, who, in the end, are his employers. That employee or director should not trade on information until investors know about it.

On the other hand, there are people whose job it is to root out every bit of information they can about a stock, and then make huge bets on it. They have no fiduciary relationship with stockholders. Rather, they're in competition with them. Those people have every right to do what they do. Both economists and legal academics would agree with that point of view.

Long Way Down has extremely vivid descriptions of computer hacking, electronic surveillance, evasion tactics and other hi-tech activities. Did you do extensive research on this, or did some of this knowledge derive from your own independent knowledge?

I did extensive research. I was helped by a few different people, not all of whom would be comfortable being named. It was exciting to learn about tracking paper trails; but, the most exciting research was learning about hiding and escaping in today's world, where there's face-recognition software that can plug into highway cameras and photograph your car with you in it.

That's very clear in the novel. It's more than a paper trail; it's an electronic trail.

Have hi-tech devices made it easier or more difficult for financial crimes to occur, and have they made detection of financial wrong doing easier?

I do think technology makes the discoverable trail much clearer and easier to root out. There are ways in which it's backfired, but overall, it's had a beneficial effect on detection. In the long run, more disclosure is much better. Many insider trading cases are successfully prosecuted because one of the things you must prove is intent. Now, you have email trails everywhere, and intent can be shown by virtue of email exchanges. Prosecutors have been able to expand their attack on this particular problem. This wasn't the case twenty years ago.

Long Way Down describes vivid interaction between Jason Stafford and his son, "The Kid," who's on the Asperger's spectrum. Tell us about that.

I've had a fascination with the spectrum of autism. This is partly based on my relationships with some cousins who are on the spectrum. In developing Jason's character, I realized he's not a warm fuzzy guy. He's an analytical, skeptical, numbers man on Wall Street. I needed to humanize him by challenging him in a very personal and emotional way. From the research I've done, and from the people I know, autism is one of the greatest challenges a parent can face.

What made you leave the financial world and begin writing fiction?

The business was changing, and I'd done it for a long while with some success, but I wasn't having nearly as much fun as earlier on. I'm so glad I made the change. I had no idea it would go this way. I thought I'd take a class in creative writing, and if I ever got a short story published, wouldn't that be a thrill? That my life has turned out this way is really magical for me.

What would you be doing if you weren't writing?

I know I'd be sailing more often. And, I imagine I'd be sitting around, fretting more about my investments on a daily basis. I'm very glad to have the financial side of my life in its own box. It was great while it lasted.

You mentioned a writing class. As a former Wall Street guy, how did you acquire such skill in writing fiction?

I've been a reader of mysteries and thrillers for a long time. I think doing a lot of reading really helps. I was something of a writer on Wall Street, and used those skills writing marketing pieces, pitch books, and I've always enjoyed putting words in a row. When I left, I took a couple of creative writing classes and ended up in a private workshop with a woman named Jennifer Bell. That did a great deal for me. I learned the basics of the craft.

If you could have dinner with any five people from any walk of life, living or dead, who would they be?

Mark Twain definitely makes the list. I think Jane Austen would also be a fascinating dinner guest, if we could get her talking. I'd love to have Reed Farrell Coleman, who's written a few series and also writes the Robert Parker Jesse Stone series. He's a wonderful raconteur. Walt Kelly, who wrote Pogo, the comic strip, would have to be there. I have collections of Pogo. As off-the-wall as the humor may be, much of my own sense of humor derived from reading the Pogo strips as a kid. And, I'd love to have my father there. So much of what I've learned about parenting and being a father, and writing about it, comes from that man.

What's coming next from Michael Sears?

I'm in the middle of a fourth book in the Jason Stafford series. In this one, "The Kid" is very much in danger.

Will you move away from writing about the financial world into something else?

I hope to get to another book this year. It's not a financial thriller. It's centered on domestic issues.

Congratulations on the publication of Long Way Down, an intense, action-oriented thriller with a wealth of information about the world of finance, insider trading, white collar and not-so-genteel crime.

Mark Rubinstein is the author of Mad Dog House and Mad Dog Justice.