In the end, all that remains are our stories.

Everything else is impermanent. Even our creations, relationships and achievements are meaningless unless they're glued to the context of a memory. And in that, our stories are our spirits. Stories are the secret to immortality.

One of my fondest memories is my father's 45th birthday.

And the used pink toilet that his buddy, John, put on our front porch, weighted down by a septic tank lid, rendering it nearly impossible to move without enlisting a tractor. Inside the mud-filled pot: a disgusting, weathered, cake-caked, decades-old Leave It To Beaver birthday card.

In this story, it's a real-life competition to defy death. Because the punishment of knocking off first will mark the culmination of a nearly four-decade-long practical joke -- quite possibly the longest ongoing joke in the history of prank-manship.

And after investing this much time in taunting each other, no one wants to forfeit the final play.

It began shortly after I was born. For my dad's 27th birthday in September of 1980, his best friend, John, gave him a card. A normal, pretty stupid card with Beaver and his brother Wally on the front in black and white. "For your birthday, go ahead and do whatever you want," the outside read. Inside: "I promise I won't squeal on ya."

Now, my dad has always had an odd relationship with cards. As he sees them, they're a waste, because you open them, maybe read them and instantly chuck them. Instead, he request that people just give him the cash and save the trees. In fact, my family bans all cards, for all occasions. My dad goes as far as writing "HBD" on the outside of the unwrapped gift (he doesn't condone wrapping paper); that's short for "happy birthday," to save ink. If Boulder's zero waste, we're -30 waste.

Perhaps it was my dad's recycling mentality, or rebellion against getting a card to begin with. But when March rolled around, my dad gave John the card back for his birthday.

They chuckled. Then in September, the card returned to my dad with the saved money stapled to it. In March, my dad returned the card with a fast food bag stapled to it. Then a bumper sticker. A receipt. Clothing tags. A green sticker that read "trash." Then it arrived tucked inside an actual full trashcan.

The logical progression was for my dad to hide the card in John's cubicle, filled with six feet of unraveled GCR tape (that's an ancient form of reel-to-reel tape); he got in trouble because it violated the safety code because the ceiling sprinkler system couldn't work.

So John used a large truck to haul the card and a one-ton concrete lid of a septic system to my dad's front yard. (My dad couldn't move it, so he incorporated it into his landscaping as a fountain base.)

Another year on John's birthday, my dad stole his Camaro and hid it a mile away. John demanded my dad slide him the keys underneath the bathroom stall door, because he was afraid they would explode. My dad slid the card with them.

That horrid card, it was always present, always growing in size and messages and memories of one-upping each other with threats of junk cars and arson. About then, when it was impossible to outdo the last prank without actual death or dismemberment, is when the pranks began going in the other direction: apathy. How little effort could you exert?

My dad's signature "HBD" began making appearances. John stapled his business card on the bottom instead of signing his name. One year my dad won the lazy contest by not even gifting the card -- but that was simultaneously his loss. So their traditions oscillated back into the middle where everything started, with the simple regifting of a card. Now going on 34 years.

My dad is 62 now. He and John have drifted apart, as friends often do, but it's the card that keeps them from losing each other entirely; they know they'll see each other at least twice a year, every year, as long as they're having birthdays.

Now it's about living as long as possible. Because that card's going to the grave with someone. That's the final prank.

The loser has to get buried with Beaver, my dad says, and there's a hunk of 25-year-old chocolate cake duct-taped on the inside that may very well be radioactive. In that, the world's longest-running practical joke may keep gifting, six feet under. The stink may even outlast the stories -- life chronicled through snippets and "HBDs," scrawled across the most unlikely book. 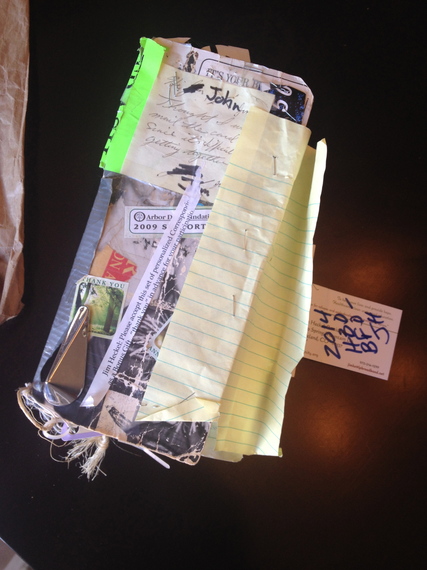