Of course you don't. Neither does Jonathan Harchick, the creator of what has to be the world's longest YouTube video, a slide show of some out of focus pictures from his trip to Chile two years ago that lasts an incredible 571 hours -- or about 23 days and 19 hours.

Harchick, a 22-year-old designer of iPhone apps in Pittsburgh, admits his achievement is more technical than artistic, but he defies anyone to make a longer video.

"To me, the challenge was about the compression," he told HuffPost Weird News. "Putting that long of a video on YouTube requires a lot of compression because the site only allows 20 gigabytes. There's a lot of work that went into this, but I think only the tech nerds will recognize the effort."

The actual video content is made up of photos taken from his trip to Chile and he says the reason they're not clear is due to the compression. 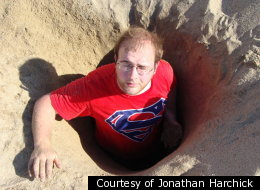 Harchick is no Internet neophyte. He has a website, MoldyToaster.com, that is described as a TV network for the web, with content designed for people who want "a more gritty, edgy, highly-targeted and in-depth form of
entertainment."

Through MoldyToaster's YouTube page, Harchick has posted more than 17,000 clips. Some have done better than others.

"I have had clips where I'm just talking that have received a million hits, but sometimes I'll put tens of hours of work on a clip and it only gets 100 views," he said.

In the first week of being posted, Harchick's mega magnum opus has garnered about 36,000 page views, and it's a safe bet none of the people who clicked are still watching.

As might be expected, the supersized slide show is polarizing viewers.

"Some people are, like, 'Wow!' while others think it's the stupidest video ever," Harchick said.

Not that he minds. He majored in media arts in college and was inspired by former Pittsburgh resident Andy Warhol's 1964 film, Empire, which is a silent, black-and-white film consisting of eight hours and five minutes of continuous slow motion footage of the Empire State Building in New York City.

Harchick has hoed this cinematic terrain before as well. He did one clip where he filmed himself counting from 1 to 100,000 in 76 hours.

"I did it in one-hour sections," he said, answering the obvious follow-up.

Is this a record? Well, it seems so, even though Guinness World Records currently does not have a category for longest YouTube video.

They may want to hold off for a while as well.

Harchick is challenging others to beat his record and one Internet expert expects other tech types to take up the gauntlet.

Web developer Joe Peacock, who is also the creative director for Fark.com, a popular news aggregator, says Harchick's video is a major achievement that others will want to beat.

"The core of any tech-based culture is knowing the rules and figuring out where they bend and break," he told HuffPost Weird News. "I predict that within a week, you'll see a challenger."

Of course, the real challenge isn't making the longest YouTube clip, it's watching it. And that's something not even Harchick can do.

"I do believe that if you watch the entire clip, it will change your life -- and not in a good way," he said.