That's $8 TRILLION, with a T. Just to put that number into perspective, it's almost as much as China's annual gross domestic product. That number represents what we call the "longevity bonus," the total value of giving -- of both time and money -- by U.S. retirees over the next two decades. But let's take a step back first, so I can explain this remarkable phenomenon.

The United States is already among the most generous nations in the world (see Figure 1), and giving back to society holds enormous importance to Americans of all ages and socioeconomic backgrounds. It seems to be in our DNA. Total U.S. charitable donations reached a record high of $358 billion last year. People often have a notion that giving is about big corporations or the foundations they see listed at the end of a public television special, but in fact, 80% of giving in this country comes from individuals and families.

Figure 1
Global Ranking Based on Rates of Charitable Giving, Volunteering, and Helping Others 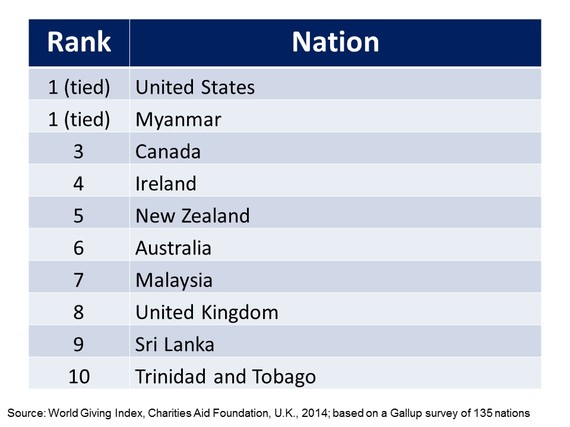 You might assume that the wealthier segments of retirees are the most generous. You'd be wrong. Retirees at all income levels give, and those with the lowest and highest incomes give almost equally, in terms of percentage of their household income (see Figure 2). In addition to money, Americans contributed 7.7 billion hours through volunteering for charities, nonprofits, and causes.

Figure 2
Charitable Giving as a Percent of Adjusted Gross Income 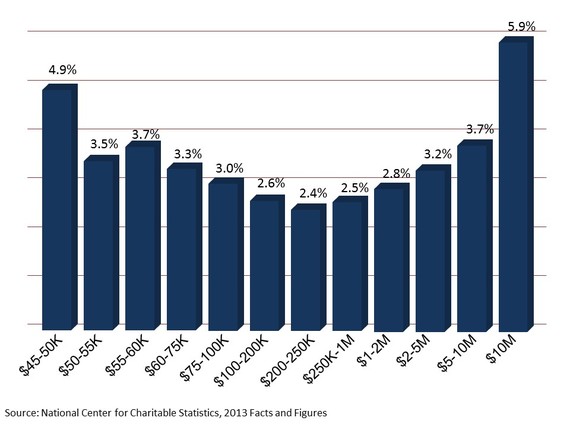 My firm, Age Wave, in partnership with Bank of America Merrill Lynch, just completed a comprehensive new study titled "Giving in Retirement: America's Longevity Bonus." We surveyed 3,694 adults age 25+ from all walks of life and socioeconomic strata to deepen our understanding of the role of giving in retirement and how giving back has the potential to both maximize social impact and provide personal fulfillment. We also wanted to envision the potential magnitude, importance, and impact of retiree giving as the number of retirees multiplies in the years ahead. This article is the first of a two-part series that explores some key findings from the full report, which you can download here.

Too often, population aging is viewed only as a burden to society. If retirement is a time only to get -- not to give -- and if retirement means to stop being productive and to stop contributing, then population aging will undoubtedly cause a strain on our nation's financial, social, and spiritual resources in the years ahead. But what if there is an upside to aging that is hiding in plain sight? Retirees are already the most generous segment of our population, and two-thirds of retirees say that retirement is the best time in life to give back -- both in terms of financial contributions and in terms of volunteer hours contributed. If we're at the dawn of a new era in which retirement is being transformed to include a revolution in large-scale giving back, this will open the floodgates on a torrent of experience, wisdom, skills, and resources to meet today's and tomorrow's needs and challenges.

Although they account for less than one-third (31 percent) of the adult U.S. population age 25+, retirees contribute 42 percent of all dollars donated to charity and nearly half (45 percent) of total volunteer hours (see Figure 3). Without question, when considering contributions of both time and money, retirees already lead the nation in giving. As Andy Sieg, head of Global Wealth and Retirement Solutions for Bank of America Merrill Lynch, says, "Rather than being a drain on our nation's resources, retirees are a valuable and largely untapped resource to help us solve many of our country's biggest challenges." 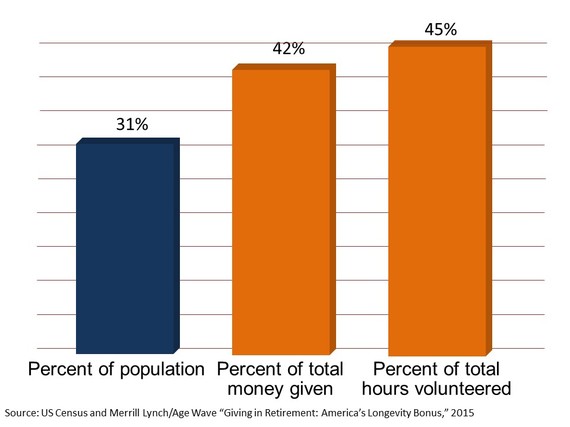 The Coming Surge in Giving

Three forces are at work that will drive the coming surge in the total value of time and money that retirees are projected to give over the next 20 years: 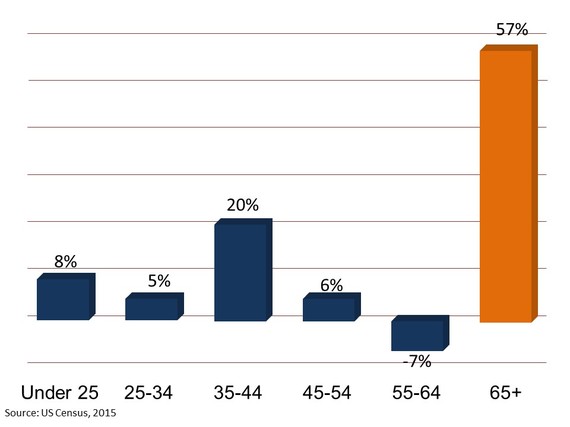 The combined effect of these three forces drives the unprecedented $8 trillion longevity bonus we are about to experience.

Here's how we calculated the value: First, assuming that financial giving rates among retirees remain at the level they are today and looking at factors such as how many people will be retiring in the years ahead, charitable financial giving by retirees will swell to $6.6 trillion (in today's dollars) over the next two decades. The other ingredient we considered in the calculation was not money; it was time. Retirees are projected to volunteer 58 billion hours of time over the same period. Assuming industry-standard measures of the value of volunteer time ($23.63/hour), retiree volunteering will contribute almost $1.4 trillion worth of services nationwide (see Figure 5)! 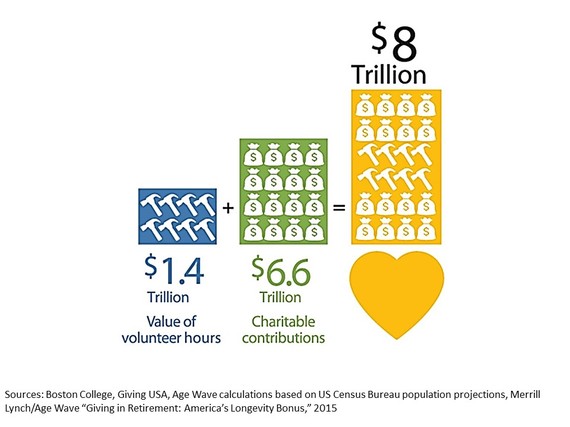 The future will be transformed both by how much retirees give and also how they give. According to our study, compared with their parents' generation, boomers are far more skeptical of big bureaucratic organizations and far more hands-on and demanding about how their time and financial contributions are used. They also say that when volunteering they want to fully leverage their talents and skills developed over a lifetime. Most striking, they are four times more likely than their parents to want to see and feel the impact of their contributions.

We also wanted to know: Why give? We learned that today's retirees have many motivations for giving, including feeling a greater sense of purpose, staying active and connected, expressing religious or spiritual beliefs, and even receiving tax deductions. However, "making a difference in the lives of others" is by far the driving motivation: It's more than five times more important than getting tax breaks (see Figure 6). 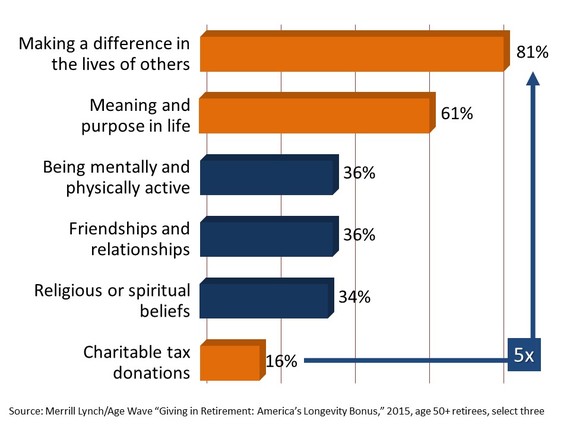 Unleashing the Longevity Bonus: A Call to Action

I must confess, $8 trillion surely seems like a huge number with tremendous potential for good. Yet, I wonder ... could this number be raised even higher? Retirees are one of the few growing resources available globally. While it would probably be unwise to expect that retirees contribute more money to causes they care about, we haven't even scratched the surface in terms of tapping into their volunteer potential. Last year, the average retiree volunteered 38 minutes per week. In contrast, the average retiree watched 49 hours of TV per week (that's 2,940 minutes). Imagine if we could shift even a small amount of that "TV time" to "giving time." In addition, our study showed us that, overall, retirees feel far better physically and mentally when they are giving back (more on that in tomorrow's post). What if tomorrow's average retiree volunteered a mere two hours per week--not so much as to cause a strain but enough to make a real difference in both their community and their own life? That simple shift would take the total longevity bonus for the next 20 years to $10+ trillion!!!!!

The question with profound importance for our society is: How do we unleash the full power of this longevity bonus? How can we motivate new generations of retirees to put their time and resources to work for the causes they care about most? What would happen if the opportunity for older adults to give and volunteer were more accessible? How can charities and nonprofits become more adept at reaching out to retirees to utilize their time and talents more effectively? If we could mobilize the large and growing population of retirees with tremendous resources, skills, and availability, just imagine what could be possible.

Read part 2 of this series, where I explore what retirees get from giving and how success is being redefined.