These are words that people here use over and over to describe how they feel about becoming Tanzanian citizens after more than 40 years as refugees from Burundi.

While the refugee and migrant crisis has engulfed the Middle East and Europe, Tanzania, one of the world's least developed countries, has naturalized 162,000 former Burundians during the past year. The United Nations refugee agency (UNHCR) says Tanzania's action is unprecedented both for the number of people involved and for the fact that they are now citizens, rather than merely legal residents. Tens of thousands of the new citizens became eligible to vote in the hotly contested national election on Oct. 25.

"We want the world to understand our happiness for being naturalized," said Leonard Abihudi, head of the group of village leaders in Ulyankulu. "Now we are new citizens who can work harder to develop this country. Without a doubt, we can now plan for the future for our families."

"We feel at peace," Amani Daniel, a Pentecostal minister, added. "Being a refugee is like an outcast. Being naturalized, you feel the burden is released." Both men spoke in Swahili, the Tanzanian national language; UNHCR staff members translated.

The new citizens live in three communities known here as the "old settlements." In Ulyankulu, 47,018 have been naturalized; in Katumba, 62,544, and in Mishamo, more than 65,000, according to recent figures from the Tanzanian commandants of each settlement.

Many of the new citizens were born in Tanzania during the community's long stay as refugees. Several thousand people await decisions about their immigration status; among them are a small number of Congolese who fled to Burundi and then onward to Tanzania with the Burundians in the 1970s. 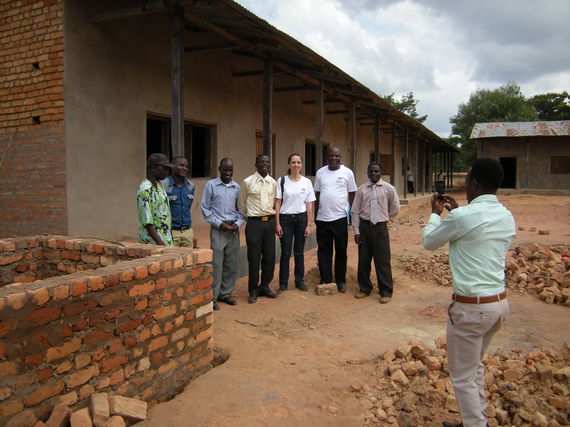 Athman Igwe, settlement commandant at Katumba, said that Tanzania used to have 122 tribes and now it has 123.

"We have welcomed them to come on the land," he said. "We want them to integrate with other people."

UNHCR's country representative for Tanzania, Joyce Mends-Cole, said the country is "leading the way" on naturalization of refugees. It had granted citizenship to 34,000 Rwandans more than 20 years ago, before the 1994 genocide in that neighboring state. Most countries that permit refugees to integrate grant them permanent residence or an alternative status, rather than citizenship, she added.

Godasto Mudima, UNHCR assistant program officer at Ulyankulu, said that Tanzania made "an unprecedented decision for one country to naturalize that number of people" and he called on development organizations to support the transition.

"There is a need for more hands to make integration work," he said. "If it fails, it will send a big signal to other countries," possibly discouraging other governments from allowing refugees to integrate.

As one of the world's poorest countries, Tanzania faces challenges meeting the needs of its native-born citizens, let alone the newly naturalized. It also accommodates 100,000 other refugees in the north, with assistance from UNHCR, foreign aid and nonprofit humanitarian organizations.

Each settlement sprawls over vast acreage of farms and forest. Ulyankulu, for example, has 11 villages on 1,200 square kilometers (463 square miles), while Katumba has 32 villages, according to Tanzanian officials. Almost every village has a primary school, thronged by children in uniform, but secondary school students have to travel a long way to class, stay in dormitories or cut short their education.

The roads in each settlement are unpaved, and private cars are rare. People travel mainly on foot or on bicycles or motorbikes, often carrying heavy loads. Each settlement is at least an hour's drive from the nearest town. Ulyankulu is in central Tanzania, about 80 miles (an eight-hour drive) northeast of Katumba and Mishamo, which are three hours apart by road.

At community meetings in the three settlements, many women leaders said citizenship brings them happiness because their children will grow up free of the stigma of being called refugees, have greater opportunities for advanced education and be able to serve in politics, the police and the military.

"Tanzania has taken care of us in a way that is beyond explanation," said Justina Francis of Mishamo. Still, she and several other women requested better health services, especially for pregnant women and infants.

"We feel happy, lucky," said Gerard Jonas, a Baptist minister at Ulyankulu. "The exercise was done freely. Everyone made their own choice" whether to request Tanzanian citizenship or return to Burundi.

Everest Vimoreka, secretary of the business association at Ulyankulu, said that, although they had been excluded from Tanzanian politics, people in the settlements had been free to develop economically. They cultivated corn, beans, rice, peanuts, cassava, millet and tobacco, selling the surplus in Tanzanian markets and building up businesses in the settlements.

"To summarize," he said, "we feel very happy to be seen and considered as Tanzanians."

A group of men in Mishamo debated their new political alignment, with one stating that "the mother party will be a priority," apparently referring to Chama Cha Mapinduzi, the party that has ruled Tanzania since 1977. Another said they will be members of diverse parties, a third said he is ready to defend Tanzania "against all forms of violation" and a fourth said that they have much to learn about citizenship because they are "like a child in the hands of a mother" compared with their fellow Tanzanians.

But their overall message celebrated their new freedom and offered thanks to the Tanzanian government, and hopes that those whose cases are unresolved hear soon that they, too, have been granted citizenship.

The new citizens arrived in Tanzania beginning in 1972 when they fled genocide in their native Burundi. At the time, Tanzanian President Julius Nyerere took an "open door" approach to refugees, calling them fellow Africans, rather than foreigners. The government granted the refugees large tracts of land in national forests on which they were free to build villages and establish farms.

Tanzania changed its policy in the 1990s when it was overwhelmed by nearly 900,000 additional refugees from conflict in three neighboring countries - Rwanda, Burundi and the Democratic Republic of Congo. The newer arrivals were restricted to densely populated refugee camps where international aid provided for their upkeep.

Most of the 1990s refugees have returned home, but beginning in April of this year, 66,000 people fleeing renewed violence in Burundi flooded into Tanzania. They shelter in tents in a temporary camp adjacent to a long-term camp that houses 63,000 Congolese refugees.

The Burundians who came in the 1970s continued to have the right to farm and to trade their products with Tanzanians, although they were required to get government permits if they wished to leave the "old settlements," whether for medical, educational, religious or other reasons.

The process of granting citizenship began in 2007 when the Tanzanian government offered the Burundians a choice between returning to their native land and becoming citizens here. More than 30,000 chose to return to Burundi, though some of them have since come back to Tanzania.

The naturalization process bogged down for several years as Tanzanian politicians debated whether the new citizens would be allowed to stay on the land they had settled or would be required to move to other parts of the country. The first efforts by development organizations to support the prospective citizens shrunk as the policy decisions were delayed.

Adolph Bishanga, UNHCR officer at Mishamo settlement, said the UN agency left the settlement in 1985, when the Burundian refugees had established themselves, and returned in 2008 to assist those who wanted to repatriate and those applying for citizenship.

"We took a community-based and rights-based approach," he said. "We formed a women's network. We advocated for girls and boys going to school. We reduced the (school) drop-out rate by 97% and increased the pass rate to 61% from primary to secondary school."

Mishamo's second high school is under construction, but the settlement needs better health facilities and expansion of the water supply, he said. It has a primary court and a district court is coming so that most legal cases can be resolved without hours of travel to the nearest town.

"We advocate and also we make the community to have responsibilities," Bishanga said.

Harlod Bubelwa, the settlement commandant, said Mishamo needs support from donor governments, non-profit organizations and the United Nations "because the community has already done their part," for example, by gathering bricks, stones and sand to build the new school.

Bubelwa added that the naturalization process is not yet complete because some people are still waiting to hear whether they will be granted citizenship.

In all three settlements, the next project is full integration into Tanzanian life - expanding government benefits and services, access to higher education, acceptance by native Tanzanians, civic education and participation in politics

Women and men at Katumba spoke of their community needs: improvement of the roads (which are unpaved), transportation to health centers, clean water within a kilometer (0.6 miles) of each village, housing for teachers, a chance for children with disabilities to go to school and, above all, increased educational opportunities. They also requested youth sports programs, saying they have missed out because most sports are sponsored by politicians, who had little motivation to favor nonvoters.

Kudra J. Mwinyimvua, regional administrative secretary for the Tabora region, which includes Ulyankulu settlement, said native Tanzanians are comfortable with the new citizens because they already do business with them and there are numerous intermarriages.

"The challenge for us, as always, is resource scarcity. We feel the problem of providing these social services," she said of development needs in the settlement and in the rest of the region.

"Now, as a government, we are just looking at how to assist the newly naturalized Tanzanians so they live safely and have economic activity."

Adbdul Karim Mnacho, the Ulyankulu commandant, said that more than 11,802 native Tanzanians already live in the settlement. "Life here is somehow attractive," he said, adding that he hopes more people will move to the settlement.

The biggest impediment to growth is an acute shortage of water, except in the rainy season. Nonetheless, Ulyankulu's farmers produce food surpluses that they sell outside the settlement, as well as tobacco as a cash crop.

Maha Kashoor, UNHCR field officer for all three settlements, said the people in these communities are very hard working and have been able to feed themselves and more. Still, they need vocational training and other support to expand business opportunities that will "encourage people to stay here and not everybody flee, especially the younger generation."

New citizens in all three settlements say they want the world to know that they need assistance in order to assimilate, but they also say they have something to share: As victims of war, they are dedicated to peace, and they have a deep appreciation for the Tanzanian way of treating neighbors.

"When we were naturalized, we gave a grand party - indigenous Tanzanians were invited - to thank the government," said Abihudi, head of the Ulyankulu village chairs. That is his community's advice on how to integrate. 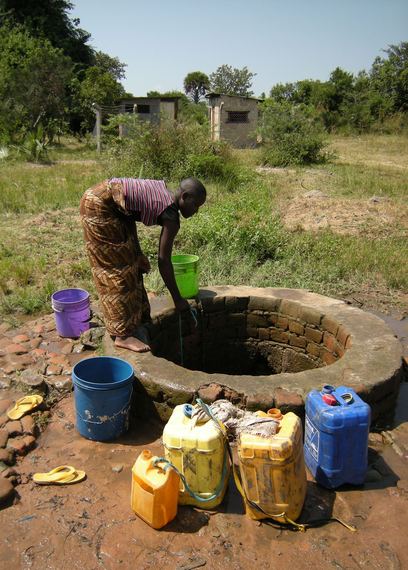 A girl called Happiness draws water from the only free well serving more than 40,000 people in Ulyankulu settlement. Photo by Barbara Borst