Franklin Mint Federal Credit Union member Lois Snyder is a retired school superintendent, who voluntarily runs an after-school study group for children of varying ages that need a little extra help in the classroom. Lois also volunteers her time as a member of FMFCU Partners in Education Board, which, as the philanthropic arm of Franklin Mint Federal Credit Union, runs a bevy of financial literacy and educational programs. Often, her two volunteer entities overlap but on one particular day they collided, creating a heartwarming outcome.

Tim Fanning, Principal of Tinicum Elementary School in Southeast Pennsylvania, dropped by Lois's class and invited them to participate in an impromptu teachers' meeting. He gave the students 39 balloons to present to longtime teacher Murray Schiff. Tim had called his teaching staff together to announce that Murray was being recognized by FMFCU Partners in Education for Excellence in Teaching. Murray had been nominated by colleagues, former students, and parents, and Lois said he was most deserving of this prestigious award. He had taught at the school for 39 years, hence, the balloons.

Lois said, "it was so exciting for my little rag-tag group." She continued, "We all marched in and gave our balloons to Murray, who was so moved he had tears in his eyes." What she said next nearly brought tears to my eyes. Murray went back into her room after the meeting, gave the balloons back to the kids, and asked for a photo with them.

She told me she wanted to give my team and me a personal insight into the impact of our educational initiatives. Those initiatives culminate in the annual Partners in Education Celebration, Pennsylvania's premier academic recognition event that lauds academics in a manner similar to sports banquets. April is Financial Literacy Month. It is no coincidence that FMFCU Partners in Education holds its annual Celebration this month. 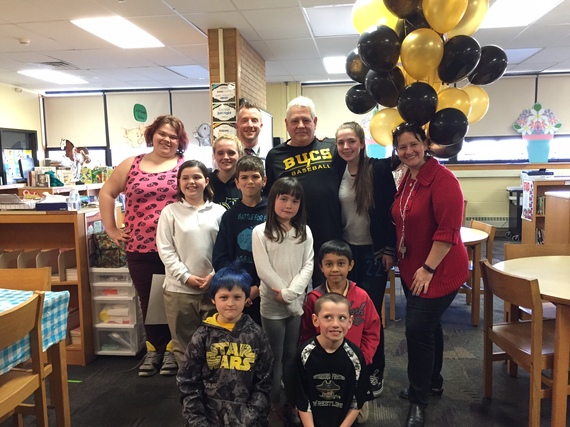