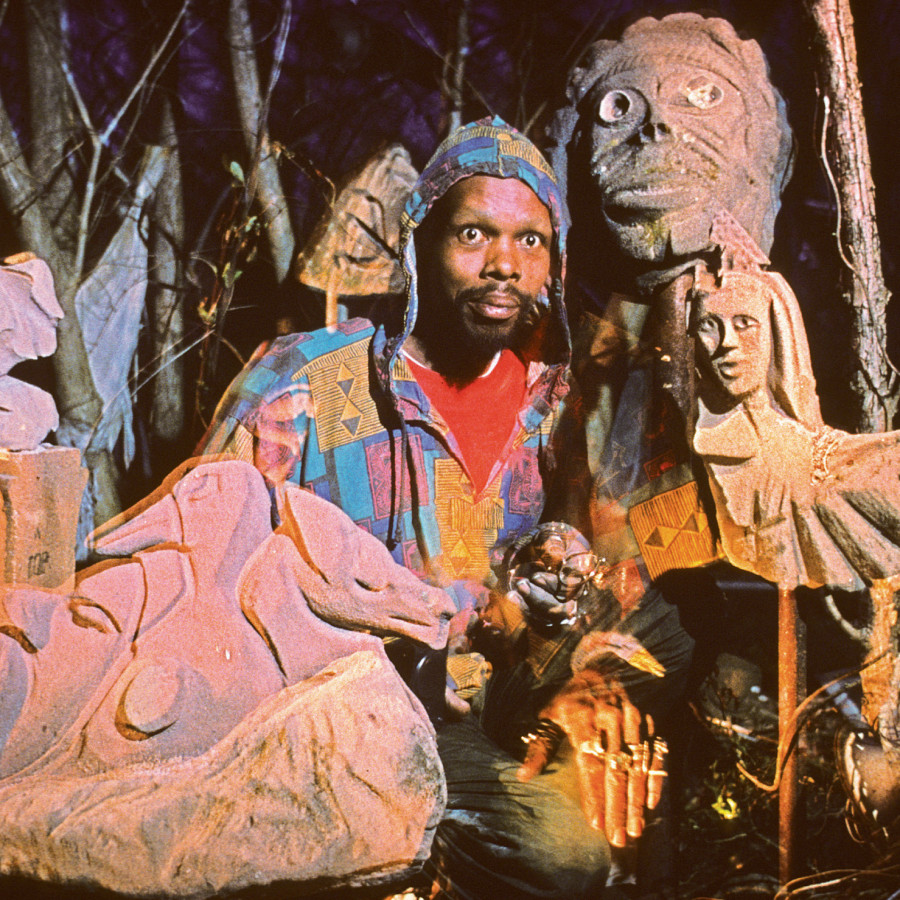 "I'm gonna get your garbage, your trash, your debris," Lonnie Holley says before a crowd gathered to hear him perform at the American Folk Art Museum as part of the ongoing exhibition "When the Curtain Never Comes Down."

He is magnetic, in every sense of the word, from the wild glimmer in his eye to the enchanting rhythm of his voice, which strings ordinary words into incalculable sermons, sounding like the daily prayers of another planet. Yet the word "magnetic" seems most apt when describing Holley's physical appearance; his entire person is swarmed with tchotchkes --- six rings per finger, 12 bracelets per arm, and more pins, beads and thingamajigs than one could count, piled on to such an extreme the best explanation would be one of gravitational pull.

Of course, the many baubles clinging to Holley's person are just one facet of his performance art, a multidisciplinary mission that aims, above all, to turn your garbage into his art. "I wear the jewelry to show that, if you put your brain to it, it can be done," Holley explained to The Huffington Post in an interview prior to the performance. "I find something that I like and I rework it." This idea is the core of Holley's artistic practice, a complex constellation that encapsulates both his sculptures and his music. 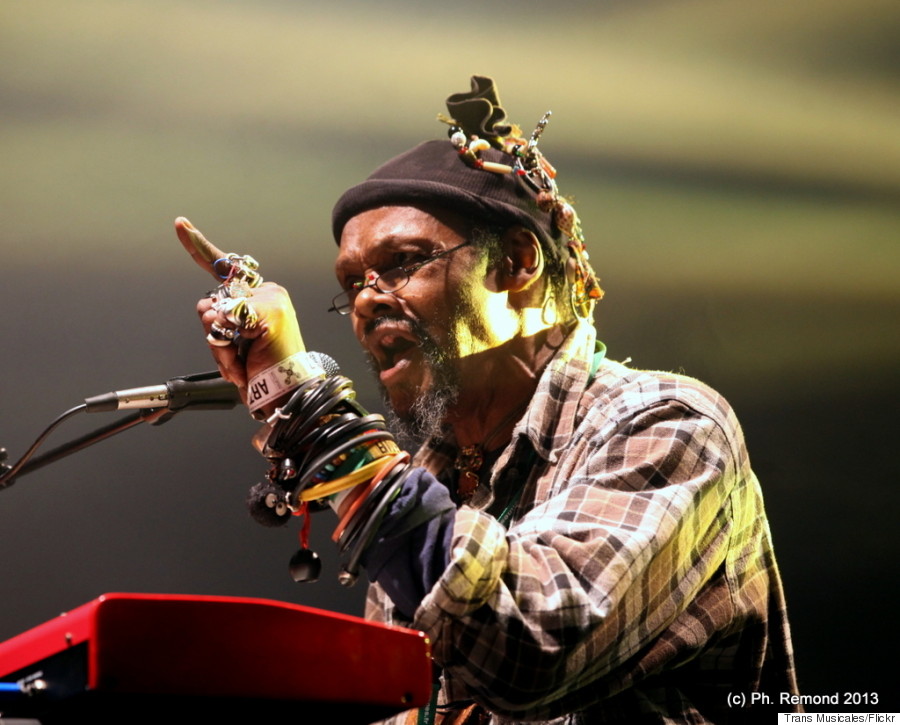 Lonnie Holley was born in 1950 in Birmingham, Alabama, the seventh of 27 children. Almost immediately, his life was plagued with trauma. "You can imagine if a woman had three children that needed her titty, then it would be all right for another woman to take one away and feed from her breasts instead," he explained in an interview with The Fader. According to the artist, a woman offered to watch the infant Holley overnight, never gave him back, and instead traded him to another family for a pint of whiskey.

He grew up hungry. School was hell. At 7 years old, he tried to run away, was hit by a car and pronounced brain dead. One of his happier memories was growing up next to a state fairground and a drive-in movie theater. "To get to the state fair I used to have to crawl through a sewer pipe," Holley explains. "I did this song called 'I Stole This Knowledge' because I had to sneak through this sewage pipe to get onto the fair property and once I was there I could see everything that was getting a blue ribbon. I could see everything that was getting first prize, second prize, third prize. I was looking at the greatest products of humanity."

Similarly, at the drive-in theater, Holley snuck his way in, smuggling for himself an infinite buffet of morphing sights and sounds. Also, popcorn. "I picked up all the popcorn, all the candy, everything that was stepped over, and I got a chance to eat it. I was able to see all the movies that I wanted. I had to steal an education. I was crawling through sewer pipes to get into these places for free, stealing my way in, but I was getting an experience no other child would have. Up and down the ditches, I dug up worms, I turned over the old broken glass, I turned over the broken stone, I turned over the stuff that was supposed to have been flushed out of the city." 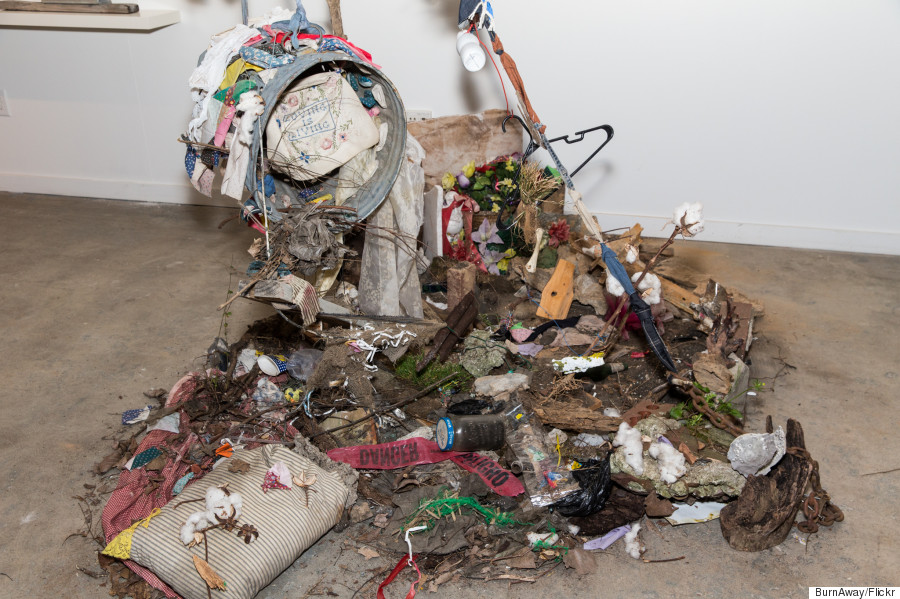 As a young teen, Holley served time at a barbaric juvenile facility called the Alabama Industrial School for Negro Children, where he endured cruel beatings and solitary confinement. It was during this time that, according to Holley, he began expressing his emotions on the inside, and, having no one to externally express them to, began transforming them into the seeds of art.

At first, Holley had no idea he was creating art. He started in 1979, after his sister Bonnie Holley lost two children, a baby girl and a young boy, when their house burned down. Riddled with pain, Holley found some sandstone and a crosscut saw and built two gravestones, his first sculptures. "I didn’t know it was art. I thought I was making baby tombstones."

When addressing the crowd at the American Folk Art Museum, Holley occasionally alludes to the tragedy, out of context, like a tic, almost as if subconsciously warning the audience of his sister's fate. "You got all this stuff plugged in and you never check the fuse box," he said. "These overloaded sockets will set a place on fire." 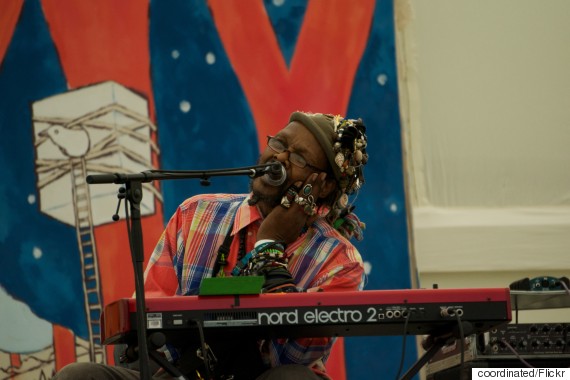 Within a year of the tragedy, Holley had created approximately 100 works of art, made from phonograph records, melted television sets, copy machines, plastic flowers, baseball bats, animal bones, clothespins and other discarded gems. "I really like old stuff that is deteriorating," he explains. "The more it's deteriorating the more it has to teach us, because the closer it is to nature itself."

He points to one sculpture entitled "Joy or Power," in which shriveling power cords dangle in a knotted mess, their silvery insides spewing out. "It's all about: do we know what kind of joy power can bring? You can see the erosion on the copper. I wanted to show that just because you have the ability to use the power, let's not abuse the power to the point that your cords and everything get to a point where they can burn you out."

Just a few years after he began making art, Holley's work was acquired by curators at the Birmingham Museum of Art and the Smithsonian. Yet, as communicated by Valerie Rousseau, curator of "When the Curtain Never Comes Down," Holley's art objects are only the jumping-off point of his artistic practice. "It's difficult for me to see his objects as independent pieces," Rousseau explained to HuffPost.

"I feel like they are all components of this environment, and environments are lifelong projects. They are not object-oriented. It's a whole system and often involves other practices. For Holley, it's the storytelling, the music. It's like a laboratory. It's evident when you are experiencing performance art that it's not object-oriented, it's the body is carrying the message, and that message is not seen, but experienced." 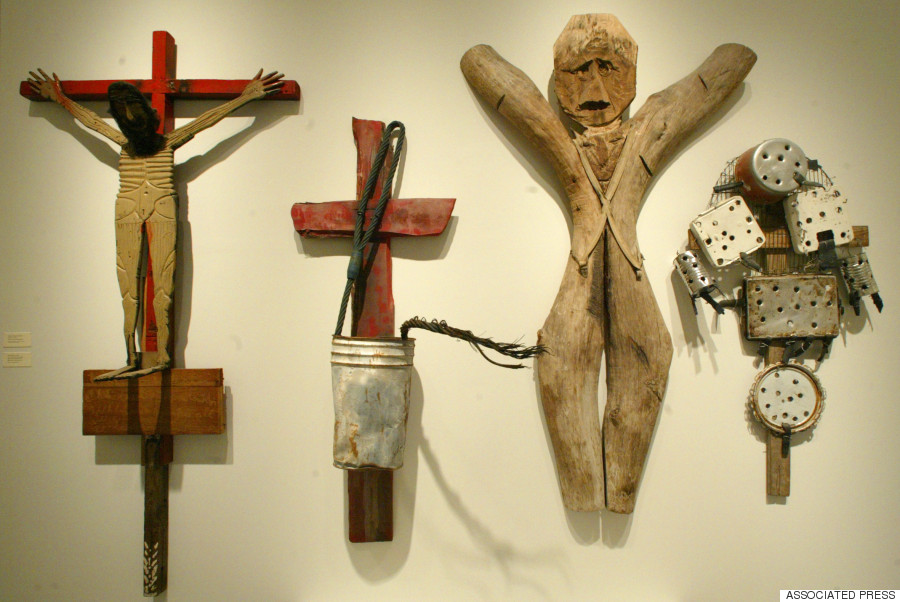 The music Rousseau refers to got its start in 2012, when, at the ripe age of 62, Holley began his career as a recording artist. Under the record label Dust-to-Digital, Holley released two albums, "Just Before Music" and "Keeping a Record of It." They're the aural equivalent of Holley's sculptures -- gruff, doddering, haunting, otherworldly, haphazard and yet seemingly cosmically ordained.

The songs are of a breed all their own, containing no chorus or melody, reusing and remixing ideas, chords and refrains as if they're old, dumped objects found on the road. Each performance is a balance of repetition and improvisation. "Once I record it, I'm not gonna burden my brain with remembering exactly that," he says. "I'm already thinking about the next thing." 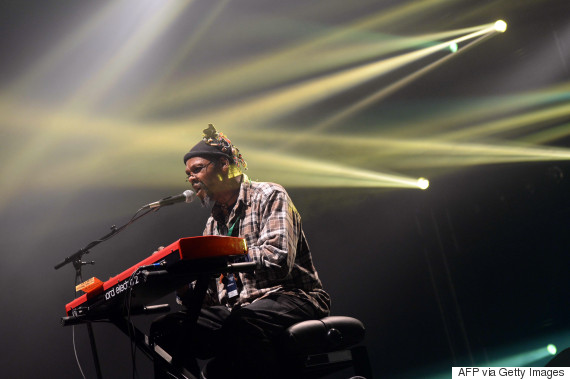 Over the past three years, Holley has collaborated with bands including Deerhunter, Animal Collective and the Dirty Projectors. During his performance at the Folk Art Museum, he's joined by vocalist Lizzi Bougatsos of Gang Gang Dance and I.U.D., for a wobbly and odd duet that the two weave together out of thin air. "My music and my art, I see them as Siamese twins," Holley says. "Because they're both coming from my brain." Holley's songs pick up where his sculptures leave off, revisiting themes of creation, survival and knowledge with the same unearthly conviction, as if possessed by his own memories.

Having a conversation with Holley isn't all that different an experience. Sometimes answers turn into stories which veer into sermons and verge on songs. "He is an excellent storyteller," Rousseau explains. "He is always able to tell a story. But his work is related to something that is larger, something more cultural or universal. It's an extended time frame that is related to something greater than the sound."

"People will take out their cell phones and watch a group of people get in a fight and laugh about it," Holley says, in the middle of a discussion about iPhone photos. "Everyone thinks they're a director and they're not. My whole thing is: are you directing or are you causing death? Which is still, like, a die. All the people play dead. Somebody gotta pay that ambulance bill. Somebody gotta pay when somebody is so afraid when grandmothers and grandfathers get too afraid to even get out of their homes anymore. Somebody have to pay. One way or another you've got to pay that bill."

Holley's anxiety regarding the impending dangers of technology is glaring, and makes repeated appearances in his artwork, music and dialogue. "Technology is gonna take control of everything," he explains to the museum crowd. "Art is actually just dictionaries and encyclopedias for the survival of the future." Words tumble out like shiny nonsense; it's only upon further reflection that they begin to assemble into something meaningful, valuable, rare. 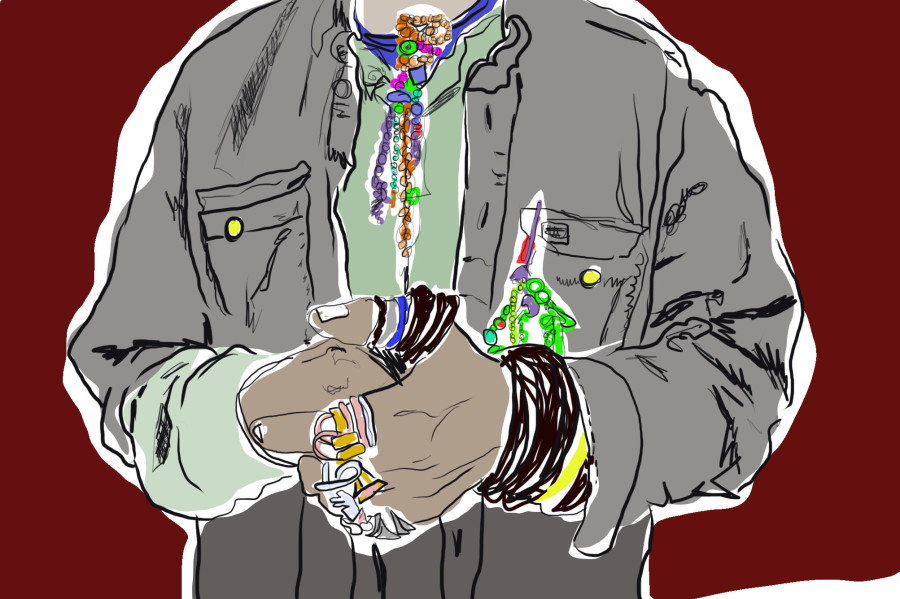 At 65 years old, Holley has had the opportunity to watch his artistic prestige blossom before his eyes. "To look at your work moving from one level to the international level and for me to still be alive ..." Holley pauses, clearly overwhelmed. "A lot of the artists that are in this particular exhibition with me are dead."

This particular exhibition is "When the Curtain Never Comes Down," an exceptional display of lifelong art performers, not to be confused with the genre of performance artists. For such artists, their lives constitute one continuous artwork, communicated in every word, every outfit, every gesture. "They play and dress their lives, fully immersed in their stories," writes Rousseau in the exhibition catalogue. "These stories define an alter ego, or a second skin, which can be conceived as a transitional object."

"Let's show some respect for life," Holley tells his enraptured audience before beginning his first song. "Let's show everyone how we throw out the trash. All of us use the brain, all the way to Mother Universe. Thumbs up to Mother Universe." For Holley, this expression is the equivalent of a handshake, and is repeated at the start and end of most conversations. He explains the reasoning behind the phrase: "You got two thumbs up. That's one thing. Then we got eight fingers, eight fingers!, wrapped around each other and bringing us together." He clasps his hands together, holding the universe within them.

From the rings on his fingers to the words in his mouth, Lonnie Holley is always at work on the art that is Lonnie Holley. He's a scavenger and a shaman, a performer, a storyteller and a genuine spirit. To encounter him, in person or through his work, is to experience a survival story of the most extraordinary degree. Despite the relentless barrage of tragedy Holley faced throughout his life, he salvaged his very being like a discarded object left in a sewage pipe, and turned it into something wildly beautiful.

Holley's work is currently on view as part of "When the Curtain Never Comes Down," which runs until July 5, 2015, at the American Folk Art Museum in New York. See a preview of the exhibition below.