This past weekend I was invited to a event for a charity that has been near and dear to my heart for a long time, Right To Play. Many of you may have heard about Right To Play as it was also the organization that Celebrity Apprentice contestant Summer Sanders decided to donate her winnings to.

For those less familiar with the non-profit, Right To Play is a humanitarian, non-governmental organization started by 4-time Olympic gold medal Olympian Johann Olav Koss. Right To Play is committed to improving the lives of the most disadvantaged children and their communities through Sport for Development. Sport for Development evolved out of the growing evidence that strengthening the right of children to play enhances their healthy physical and psychosocial development and builds stronger communities. Right To Play is committed to every child's right to play. They give children a chance to become constructive participants in society, regardless of gender, disability, ethnicity, social background or religion. Through games and sports, they help create social change in communities affected by war, poverty and disease. They teach the children to "look after yourself, look after one another", with the slogan scrawled across every ball they play with.

Like I mentioned, high-profile athletes such as Summer Sanders, Wayne Gretzky, Michael Phelps and Steve Young have all devoted time to the organization because they all understand what a powerful tool sport is in helping children develop physically, mentally and emotionally. The first time I heard about the organization--nearly twelve years ago now--I knew I wanted to give back to the cause to help other, more disadvantaged children, reap the same benefits from sports that I have.

Today, I wanted to share a few short lines about the experiences of my first visit to the field for Right To Play. There is truthfully no way to completely summarize my experiences of even twelve hours in one short blog. It is even harder to express the power of such a phenomenal, life-changing program or the emotions you feel when you see a little girl catch a Frisbee for the first time. Of the projects I visited, there are two experiences that have truly stayed with me long after my flight departed Sierra Leone, Africa.

The first experience came from a Right To Play project that worked in conjunction with a Red Cross Center about an hour outside Freetown, Sierra Leone. On the bumpy trek over the mountains, I saw hundreds of women along the way functioning in their traditional female roles: washing their clothes in the rivers, carrying baskets to and from the markets on their heads, carrying infants in improvised slings on their backs, and cooking up the day's meals. Even as I arrived at the Red Cross Center, I noticed that the boys were playing chess or reading and the young girls were sewing and working on batiks.

But as the volleyball net was slung and the Frisbees were carted out of their designated box, the atmosphere changed. There were no longer stark divisions between the boys and girls. I jumped in the warm-up circle and joined in with the games and songs. As the coaches paused to figure out the rules, I was amazed to see that it was the previously meek girls that were shouting out directions and slowly taking on more and more leadership responsibilities. We were no longer female or male, child or adult, white or colored, blond or dark-haired, African or American. We were all athletes and teammates and we all laughed and cheered over the spirit of the game. I started wondering if these young girls may be the first generation to lead the women of Sierra Leone away from their traditional female roles.

The second experience came from a trip to the Remand Home, a detention center holding thirty young boys and girls who were awaiting trial for alleged crimes ranging from murder to loitering. Due to an unfortunate incident several months earlier where several of the boys escaped through a ceiling panel, all thirty children were crammed into one small concrete room to ensure that no more escapes would occur. The room contained nothing more than nine thin, moldy, foam pads where the children slept three or four to a "bed". The majority of their day was spent whiling the hours away in this small, isolated room. Seeing the obvious need for the children to reap the values of sport and activity, the Right To Play project coordinators decided to teach the children at the same time that they trained the coaches. It would be unbearable to think of thirty children sitting in a locked room while their guardians were outside playing and learning skills that they may someday learn themselves if they were fortunate enough. The Right To Play project was only two days old, so I was able to see the project run from its virtual inception. 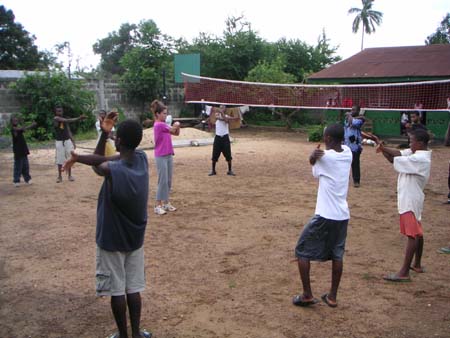 The children gathered around the meager open space that Right To Play was helping transform into a makeshift playing field. After a variety of volleyball skills were taught and practiced, the children split up on either side of the volleyball net to put their training into action. A bump, a set, and finally a spike drove the group into an eruption of cheers. After each great shot, the children would rush over to give each other a pat on the back or a victorious high-five. And to see an enormous smile break across the face of a child who would otherwise be locked-up in an isolated room and possibly back out on the streets committing more crimes in a short time, made the whole trip worthwhile. The violent children would now have a means to channel their anger, the disruptive children would now have a newfound respect, and each and every one of them would now have a sense of teamwork and support to help them through the most difficult of times.

When the activity ended each of the children filed past us to thank us and shake our hands. I noticed that they were all touching their heart before they would extend their hand to us. I would later learn that this was a sign of great respect and gratitude. I got to touch the hand of each child that played at the Remand Home that day, but I realized that all the fundraising efforts I have done over the past three and a half years helped touch the hearts of so many more.

There is a quote by Carl Jung that reads "The sole purpose of human existence is to kindle a light in the darkness of near being". Kenneth Hildebrand writes, "The most glowing successes are but reflections of an inner fire". And Henry David Thoreau says, "What lies behind us and what lies ahead of us are but tiny matters compared to what lives within us." Those behind Right To Play are serving to kindle that light and fire in the hearts of millions of children, so they, too, can find the glowing successes that lives within each of them.

I left Sierra Leone with one important image engraved in my mind: the Right To Play ball hanging in the most prestigious spot in the Red Cross Center as a prominent image for everyone to see. The ball was obviously hung as a message of hope, reminding everyone to "Look after yourself, look after one another".

Motivational Weight Management Tip
My experience of working with the Biggest Loser contestants and Symtrimics has inspired me to leave motivational diet, health, and wellness tips at the end of all of my blogs. These tools are driven from the actual advice shared in my weekly motivational Transformation Talks. This week's tip: Many people are afraid of making the change to adopt a healthy lifestyle because they fear that they will fail. If you don't try, you've already failed. Like with love, it's better to have tried and failed then to never have tried at all!