Lost amidst the fanfare of Mahmoud Ahmadinejad's visit to Lebanon this week is a single photograph which is stunning in its implications, shocking in its contrasts. 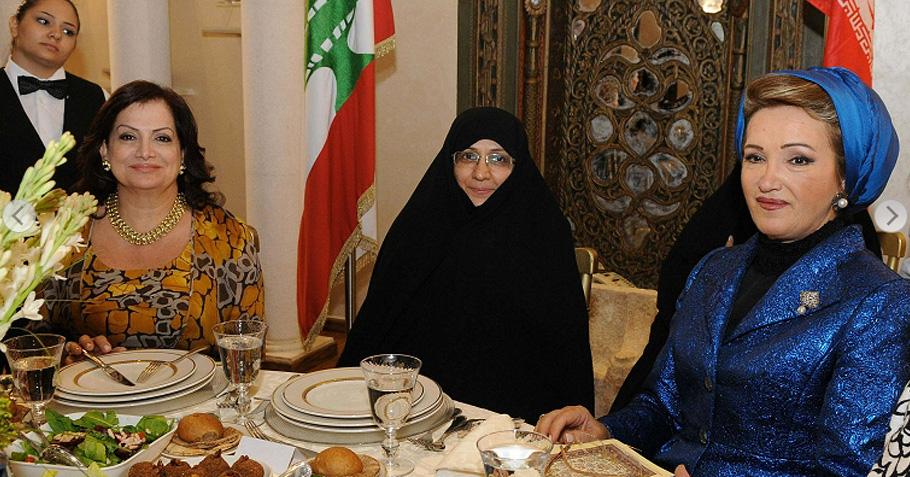 She in the black hood of the Islamic Republic's hejab which for over 30 years has been the accepted form of official female attire by conservatives and reformists alike in Iran, is nestled in between the glamorous wives of Lebanon's state.

Suleiman, a Maronite Catholic, and thus unveiled, is to Farahi's right, elegantly bejeweled in gold, her face framed with finely shaped eyebrows. Berri, to Farahi's left, a Shiite Muslim, is loosely veiled in a metallic blue scarf which has been carefully twisted around her head to reveal a well-coiffed fringe in the front. It looks like a crown. Her fine jewelry (for which she is known) is apparent, as are some other embellishments.

And then there's Farahi, huddled in a cloak, betraying the reality of Iranian women, religious and non-religious alike -- women known for their beauty, their style and their elegance. Her pursed smile is not lipsticked and what is visible of her face is further shadowed by large, outdated eyeglasses.

She is what the Islamic Republic has tried for decades to make Iranian women. But the truth is, they have failed: she is in the minority to this day. Most Iranian women do not wear the chador (the all-embodying hejab commonly associated with Shiism). Many, perhaps most, of them would not even wear hejab were they not forced to by government decree.

But it isn't just Farahi's extreme hejab which contrasts with the Lebanese ladies. It is what appears to be her deliberate attempt to not look good at all -- in many religious circles, in many different religions, stylishness in a woman is associated with looseness. And thus Farahi's eyebrows -- the pride of many an Iranian woman -- are not plucked, her face is without a trace of makeup, and her eyeglasses date back to the early days of the Islamic Revolution.

Religious women in Iran, whether they wear a chador or not, tend to at least some basic elements of beauty. Farahi has belied even that. She is chaste, her appearance says. She is obedient. She is obscured from reality.

What is more fascinating than Farahi's appearance is that she is even in the photo at all.

In Iran, she wouldn't be seen with these "types" of ladies -- certainly not in public. In fact, ladies looking like Suleiman or Berri wouldn't get far down the street in Iran: they would be detained by the roaming "morals police" or Revolutionary Guards authorities, interrogated, mentally (and maybe even physically) abused in detention, and at the very least fined and eventually released, if they are lucky.

Is Mahmoud Ahmadinejad, by virtue of this photo, saying that Iranian women must look drab but other women, even if they are Muslim, can acceptably look stylish and beautiful?

How is it that the Iranian government will tolerate stylish women abroad, but not in Iran?

Maybe Ahmadinejad and his wife are as much a victim of the Iranian government's fundamentalist approach to women as the rest of Iran is -- perhaps he and she are acquiescing to the unswaying standards of a fractured and vulnerable government which would do anything to discredit its opponents.

Or perhaps the Ahmadinejads like the sight of beauty as much as anyone else.