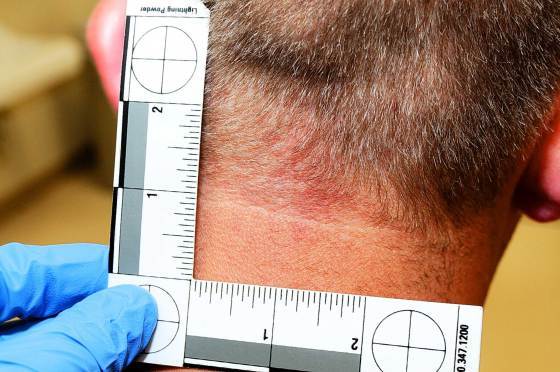 The following article is NOT meant to inflame passions, incite violence, elicit vile comments, or put anyone's life in danger. This is merely a commentary on the semantics of likening an unarmed, dead citizen to "Hulk Hogan" and other descriptions, when such grandiose claims do not correlate to the Time Magazine injury photos.

On November 25, 2014, Time Magazine released these photos of Darren Wilson, along with the following copy:

These four images offer the clearest view of Wilson's wounds

The images below show Ferguson, Mo. police officer Darren Wilson shortly after he fatally shot Michael Brown on Aug. 9, 2014. In grand jury testimony, Wilson described Brown as a violent aggressor who made the officer fear for his life. "When I grabbed him," Wilson said in testimony, "the only way I can describe it is I felt like a five-year-old holding onto Hulk Hogan."

On Monday, the St. Louis County prosecuting attorney released 38 pictures of Wilson taken after the deadly encounter. The four below offer the clearest view of his injuries. 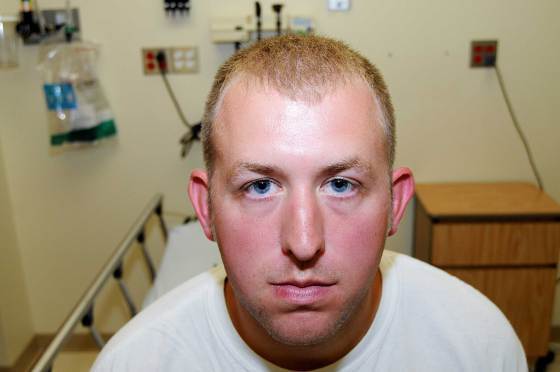 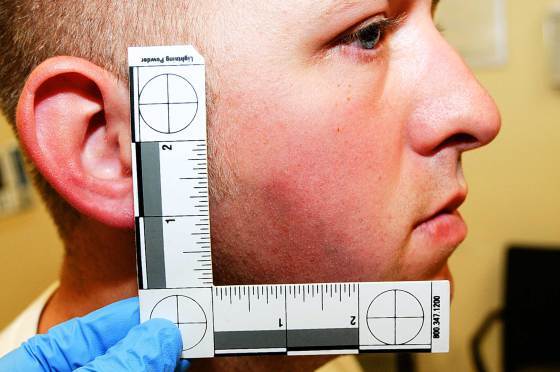 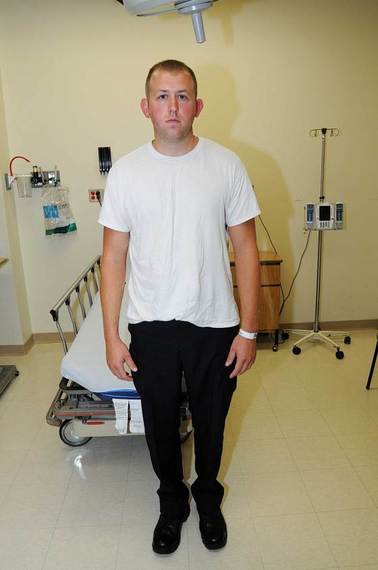 In a USA Today article, Wilson also states that after being punched in the face twice by a person with "Hulk Hogan" strength, he feared that "another one of those punches could knock me out or worse...The third one could be fatal if he hit me right." This sentiment is understandable since Wilson states that he felt like "a five year old holding on to Hulk Hogan."

Wilson then remembers Michael Brown struggling for his gun.

Wilson states, "I can feel his finger trying to get inside the trigger guard with my finger," but miraculously overpowers a man with "Hulk Hogan" strength and regains control of the weapon before it discharges in the car.

So, one more punch could have been "fatal" when a behemoth with "Hulk Hogan" strength is battling a "five year old" for the officer's gun, but the little child (Wilson) manages to struggle with Brown and keeps the weapon, but only after it discharges in the car.

If this sounds confusing, that's because Wilson's narrative is indeed a bit confusing, if you happen to take his words at face value. Before the gun went off, Wilson states Brown had "the most intense aggressive face. The only way I can describe it, it looks like a demon."

Then, after firing the gun while struggling with Brown, the enormous mountain of a man bolts off running, and Wilson states, "I see a cloud of dust behind him."

So, Michael Brown is imposing, enormous, an over 250 lb. Hulk Hogan-like figure with strength that made Wilson feel like a "five year old," but also runs fast enough for Wilson to see "a cloud of dust behind him."

With Wilson's narrative, is there anything Michael Brown can't do physically?

Interestingly, Michael Brown has immense strength, yet is NOT powerful enough to remove the gun from Wilson's hand after going for it with a most intense and aggressive demeanor. Rather, he simply gets startled like a person who's never heard a gunshot (yet "thug" types normally hear gunshots, as the prejudice goes), and the imposing Brown apparently runs off with sprinter-like speed. He has the intense, aggressive and demonic face, yet the gunshot frightens Brown into running so fast that "dust" seems to trail the fleet-footed giant.

Alright, possible, but life isn't about confusing what is likely to be a reasonable outcome with the rare occasions when something miraculous happens, or when chance and probability lead to winning the lottery or getting struck by lightning. Yes, Wilson's version could have happened, but after comparing the injury photos above with such grandiose claims of Brown's physical presence, it's highly doubtful Darren Wilson is telling the whole truth.

Therefore, let's take Darren Wilson's comments at face value, literally, and without any mental filters that lead to anyone thinking, "Well, he might have exaggerated, but you know what he meant by that..."

Look up at Wilson's photos. Spend some time looking at them and then say the words, "The only way I can describe it is I felt like a five-year-old holding onto Hulk Hogan."

Then look at some other photos of what that sentence truly means, from a semantic perspective. It almost sounds ridiculous to compare pictures of Hulk Hogan to Wilson's injury photos, but doing so will help clarify the moral and semantic dilemma of likening a dead, unarmed citizen to what most Americans correlate to power and strength. The following are photos of Hulk Hogan from Den of Geek.us. They illustrate a famous wrestler in his prime, lifting a 520 lb. Andre the Giant, and battling other behemoths: 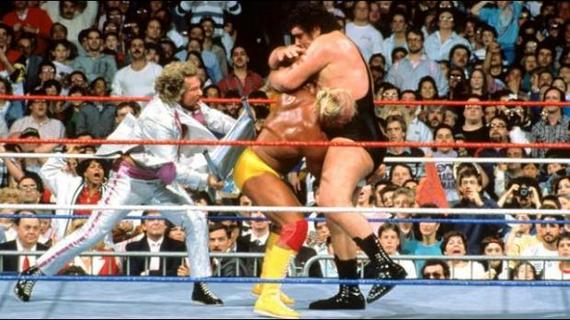 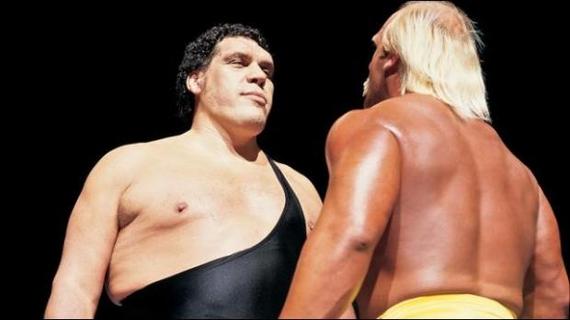 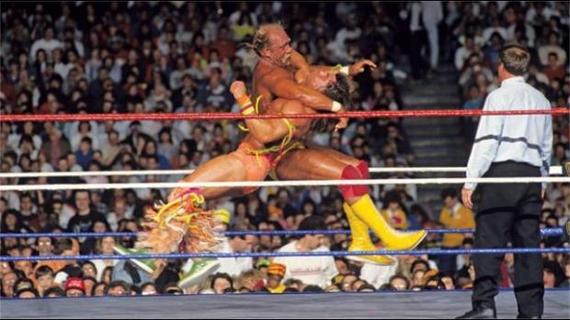 In the minds of many Wilson backers, these photos correlate to Michael Brown in subliminal ways, and help justify what could perhaps be indefensible, at least from visual evidence of Wilson's injury photos.

You don't know what happened that day, you're making assumptions!

Alright, but you mean to tell me the wrestler picking up Andre the Giant and battling other muscle bound fighters punches Wilson twice (not with WWF sleight of hand, but with the true intent to cause major or possibly fatal damage), yet there's no blood, no cut, or giant or grotesque bruising?

Apparently the most obvious result of being punched twice by a deadly, yet unarmed citizen is this:

With all due respect to Darren Wilson, this photo could also be confused with a normal case of rosacea.

So, from Wilson's narrative, our minds are filled with convenient, pop-cultural images justifying Brown's death. However, look at Wilson's injury photos again and ask if an intense, demonic Hulk Hogan would have left a police officer with redness around the back of his neck and cheek after two devastating punches. And if Wilson's narrative is correct, then the Ferguson officer is at the disadvantage of a child of around five, or this photo: 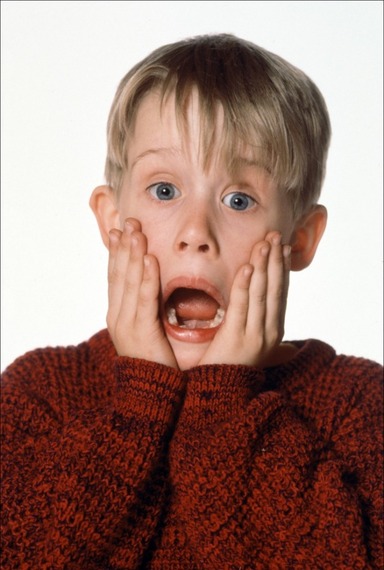 Michael Brown is this: 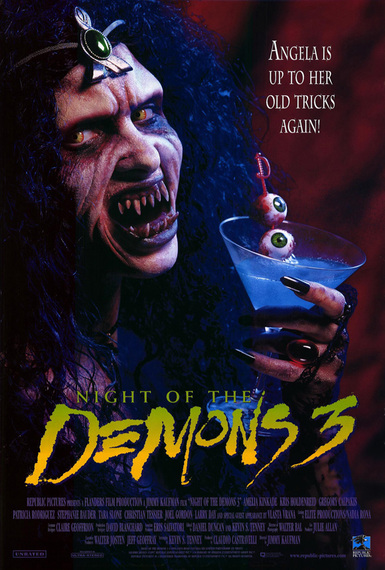 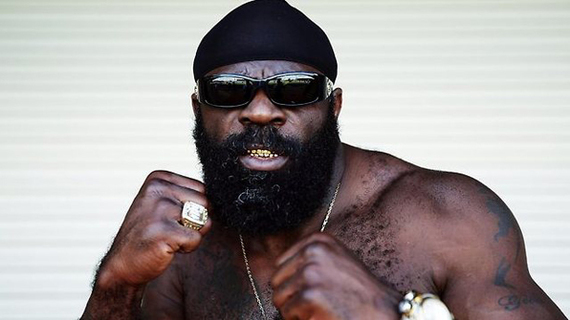 But of course, Brown really could have been this type of person, another tall, overweight and imposing figure: 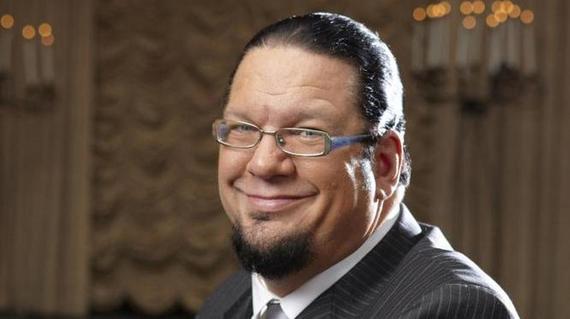 In fact, Penn Jillette is bigger than Michael Brown at 6'6" tall, an illusionist (so he probably could have stolen the cigarillos without anyone even noticing) but, hey, Darren Wilson killing half of Penn & Teller isn't something that can sway a grand jury towards their recent decision. There's simply no way that Michael Brown could have ever been a likeable, intelligent, or amiable young man, since what kind of person would steal cigarillos and rob a convenience store? That act as well, although a criminal act, is reason enough for Brown's death sentence in the minds of many people.

Finally, let's continue with how these seemingly ridiculous visual comparisons, and my seemingly bizarre analysis, actually correlate to the words of one of our greatest minds. In George Orwell's 1946 Politics and the English Language, one of the world's greatest writers and philosophers describes how words can be used to mask sincerity and accuracy:

In our time, political speech and writing are largely the defense of the indefensible. Things like the continuance of British rule in India, the Russian purges and deportations, the dropping of the atom bombs on Japan, can indeed be defended, but only by arguments which are too brutal for most people to face, and which do not square with the professed aims of the political parties. Thus political language has to consist largely of euphemism, question-begging and sheer cloudy vagueness...

Never use a metaphor, simile, or other figure of speech which you are used to seeing in print...

If you simplify your English, you are freed from the worst follies of orthodoxy. You cannot speak any of the necessary dialects, and when you make a stupid remark its stupidity will be obvious, even to yourself.

Political language -- and with variations this is true of all political parties, from Conservatives to Anarchists -- is designed to make lies sound truthful and murder respectable, and to give an appearance of solidity to pure wind. One cannot change this all in a moment, but one can at least change one's own habits, and from time to time one can even, if one jeers loudly enough, send some worn-out and useless phrase -- some jackboot, Achilles' heel, hotbed, melting pot, acid test, veritable inferno, or other lump of verbal refuse -- into the dustbin, where it belongs.

Sadly, there's been a great deal of "verbal refuse" aimed at Michael Brown's memory, with the goal of possibly making "murder respectable" and defending "the indefensible." When one hears Darren Wilson's testimony of Brown's physical prowess, how he viewed Brown's potential to kill him on that fateful day, and why he shot the unarmed citizen, it's only natural that conservative media and other Wilson supporters feel that the teen's death was justified. However, in order to better comprehend the semantics behind such claims, let's simply do what Orwell advises, and remove the "verbal refuse" of euphemism and metaphor.

Michael Brown wasn't Hulk Hogan with demonic eyes and Darren Wilson didn't almost die from being struck twice by Brown. Just look at the Time injury photos and honestly evaluate such claims. Darren Wilson's version of what happened that fateful day could be somewhat accurate, but it can't be entirely accurate with those injury photos, combined with such grandiose claims of Brown's imposing strength and physical prowess. Add in the fact that Wilson recently stated his conscience is "clean," even though he killed an unarmed citizen after a request to get on the sidewalk goes terribly awry, and something peculiar seems to be transpiring. Like Orwell states, the more you hear metaphor and euphemism (Brown is Hulk Hogan, an intense face like a demon, Wilson felt like a five year old, the next punch could have been 'fatal' yet there's only redness to his face, etc.) when describing a polarizing event, the greater the possibility that someone is trying to defend "the indefensible."