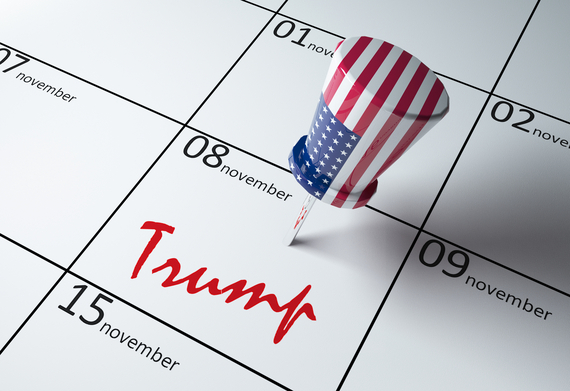 In July of 2015, I began writing this column for The Huffington Post, advancing ideas and strategies as a pragmatic Republican. Like many pollsters and pundits, I was surprised by Donald Trump's stunning victory over Hillary Clinton, although not totally shocked, having seen Michael Moore the week before the election explain why Democrats didn't have a clue about Rust Belt voters. To better understand the outcome, I went back to review my thinking about Trump over the course of the campaign, to make more sense of this watershed moment in American politics.

8/8/15 (two months after Trump declares candidacy): Trump has made a mockery of the time-honored, unwritten rule that in order to run for President, you have to have a certain level of political and public service experience. When The Donald threw his hair into the ring, a GOP circus came to town.

Trump's first comments about Mexicans being rapists and murders was startling, but not unexpected. But I started to realize this was a different kind of election and the bar had been lowered when Trump got away with attacking John McCain. If anything, his poll numbers even went up after that. I thought to myself, "if he can get away with doing this, what can't he get away with?" Unfortunately, that proved to be just the first of a series of shattered glass ceilings that would have knocked any other candidate out of the race.

2/8/16 (after Iowa Caucus): The political playoffs have begun and who would have ever imagined that rookies such as Donald Trump and Ben Carson could even make it to prime time? This may be the most unconventional campaign ever, as so many of the normal standards have been ejected from the rulebook.

The primaries crystalized how skillfully Trump was using the GOP establishment to run against the Republican Party party. Ignoring the fact that he was actually a Democrat a few years earlier, Trump leveraged the 90% of base who hated the establishment. And he played the media like a violin, getting millions of dollars of free publicity and exposure without having to raise or spend millions of dollars to build a political organization.

6/21/16 (post GOP primaries): Like many Republicans, I didn't see this coming. I took Trump's initial declaration as little more than a joke. But as the GOP primaries turned into a traveling circus, my outlook shifted from impossible to improbable, possible to likely, imminent to inevitable.

Looking back at the primary process, it's obvious how Silvio Berlusconi-ish Trump was. Both are consummate salesman, who used the image of their wealth and success to their advantage. They also capitalized on the strategy of forcing their opponents to constantly defend themselves rather than promote their own ideas and policies, while Trump deftly avoiding the fact that he had little (or none) himself, other than our government was a HUUUGE disaster. In the end, both men ramped up the base to vote against their opponent rather than for them.

7/26/16 (after Republican Convention): I don't like or trust Hillary Clinton, but I am voting for her. When forced to decide between eminently unlikeable and, at best, indisputably unqualified, I'll opt for the former. Loyalty to country trumps (sorry) loyalty to party.

The GOP Convention proved the old axiom that presidential campaigns are more visceral than cerebral. The personal demonization of your opponent that Newt Gingrich started during the Bill Clinton presidency, which then became even more vitriolic during President Obama's terms, grew even more venomous during the convention. With chants of "Lock Her Up" echoing across the arena, it was obvious that Trump was not only appealing to the pent-up fear and anger his core supporters were radiating in Cleveland, but also repeatedly stoking it, making sure they would be voting on emotions, not issues.

9/6/16 (before first presidential debate): The depressing thing is that the only Republican that Hillary could beat is Trump and the only Democrat that Trump could beat is Hillary.

Donald Trump's rapacious presidential campaign has done so much to destroy the soul of the Republican Party that he might be just the thing that allows us to reinvent it altogether, and along lines that will appeal to millennials and beyond. Our best hope of avoiding extinction is Trump's resounding defeat, a definitive sign that the Republican Party must evolve and change.

Looking back, my hope for the reincarnation of the Republican Party is now more relevant than ever. Just a couple months ago, we were all wondering what would remain of the party after the election. Now that Trump has won, everyone is acting like things are just fine because the Democrats are the ones doing an autopsy. But the fact is the GOP's internecine conflicts aren't going away and come January 20th, the real test begins for the new Administration and President Trump will be forced to confront the reality of governing. The candidate that broke all the rules will now have to deal with them.

While I didn't support Trump in the election, I am a patriot, and I want our President to succeed, so the country benefits. But I'm a pragmatist and while some (certainly not all) of the people he's chosen could govern well, there's a very big chance this could be the most disastrous presidency ever. We need to hope for the best and prepare for the worst. Our political future is more of a blank slate than with any administration in our lifetime.

Dave Spencer is the Founder of Practically Republican and a Member of the Executive Committee of the California Republican Party.