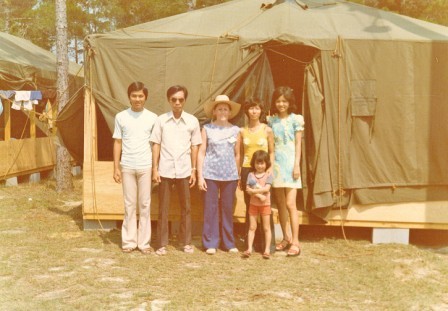 Almost exactly five years ago to the day, I concluded a column as follows:

The character of a nation is reflected in the faces of these volunteers. Some have flowers in their hands, some have tears in their eyes, all have compassion in their hearts."

I hope that, 35 years hence, America and Americans will once again reflect the "character of a nation" by not forgetting the millions of Iraqi and Afghanistan refugees who are, once again, the wretched legacy of wars they had no hand in.

I was referring to the military and civilian professionals and volunteers who were welcoming Vietnamese refugees into our country at the end of the Vietnam War.

The "35 years hence" reference was to the plight of the 125,000 Vietnamese refugees who fled their country after the fall of Saigon and who were graciously and warmly welcomed by Americans at several U.S. "refugee camps" and eventually resettled, accepted an integrated into communities across the country (Hundreds of thousands additional Vietnamese would be equally accepted and resettled in our country over the next 10 years.)

When that article was written we were in the midst of yet another refugee crisis: a tragic continuation of the exodus of more than 2 million Iraqi men, women and children who initially fled the carnage caused by the U.S. invasion of Iraq. That time, in addition to Iraqi refugees the world had to contend with a new wave of refugees created by the war in Afghanistan.

Today, once again, Americans are faced with another refugee crisis: those fleeing the carnage and atrocities perpetrated by ISIL, the Syrian government and other terrorist factions in Syria and Iraq.

While in recent refugee resettlement programs, the U.S. efforts to accept these unfortunate people may have been slow, cumbersome, full of red tape, perhaps even politicized, the hearts of Americans -- the people -- towards these hapless refugees were always in the right place.

Sadly, it is different today.

Many articles have been written and discussions held on the reasons for this sea change in what has always been an American hallmark, compassion, so indelibly etched into the symbol of who we are:

"Give me your tired, your poor, Your huddled masses yearning to breathe free, The wretched refuse of your teeming shore. Send these, the homeless, tempest-tost to me, I lift my lamp beside the golden door!"

I realize that many feel there are compelling reasons related to national security, accentuated by the recent Paris terrorist attacks, which would force us to treat the present refugees differently, to close "the golden door" to them.

I hope, however, that we can find a way to balance our security needs against what America has always stood for without dog whistles and without whipping up fear and hysteria ; that we can look back to 40 years ago to how America was true to Emma Lazarus' timeless words engraved at the feet of Lady Liberty.

Here are excerpts from the 2010 article:

The United Nations Convention Relating to the Status of Refugees defines a refugee as:

I know, because as a young U.S. Air Force officer, 35 years ago, I saw the misery, the desperation and the total dependence of these people first-hand and up-close, of which I wrote then:

Finally, the first bus arrives and the door opens. A small fragile old lady steps off the bus and breaks down in tears. An exhausted young mother holds on to a tiny baby as she is followed by six more small children -- the father is conspicuously absent.

Another large family gets off the bus; all their belongings are contained in a tattered pillowcase and in a small plastic bag. A young helicopter pilot steps off with just the clothes on his back, but smiling, happy to be alive, happy to be free.

They were the first of several thousand South Vietnamese refugees who would find temporary shelter in a makeshift refugee camp at a sprawling military base in Florida in 1975, after "the fall of Saigon." Over the next eight months, more than 125,000 Vietnamese would flee Vietnam and would be warmly greeted and accepted at other U.S. refugee camps. (Hundreds of thousands additional Vietnamese would be given refuge in our country during the next 10 years.)

America and Americans opened up their hearts and arms to this "first wave" of Vietnamese refugees and to the ones who were to follow. Within a few months the refugees were resettled in communities throughout the U.S. Thousands were graciously welcomed by Americans into their own homes; thousands more were "sponsored" by social and welfare organizations and provided with jobs. The vast majority would become hard-working, productive, loyal and grateful residents of our country.

Yes, this "was one of the more noble episodes in recent U.S. history dealing with refugees" and I hope that, 40 years hence, America and Americans will once more reflect the "character of a nation" by not ignoring or rejecting the tens of thousands of innocent men, women and children who are, once again, the wretched legacy of wars and atrocities they had no hand in.