Last weekend, the world's attention was focused on President Obama's visit with his family to Havana, Cuba.

I lived in Havana when I was ten years old, a decade before Castro. To become a permanent resident in the U.S. my father, who was a Greek citizen, had to leave the U.S. for six months and come back. In the winter of 1948, we lived in an exotic house in Havana, Cuba, with a veranda that went all around it, a thatched roof, and sumptuous tropical garden. It was commonly known as El Bohio, which is Spanish for hut, but it was not a hut, but a four bedroom house with plenty of room for parties.

Every week day we drove for forty minutes to our school, the Ruston Academy, an American school attended by the children of American diplomats and wealthy Cubans, in the center of the city. Years later, in the 1990's, while I and my teenage daughter were living in Connecticut, I received a telephone call, and a female voice with a Hispanic accent said, "Are you the Kulukundis who...?" 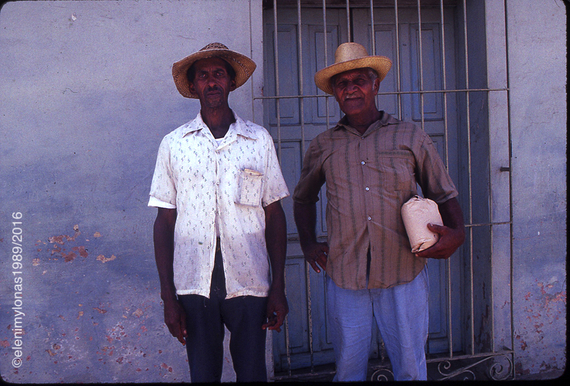 I have frequently heard the beginning of that question in my life, and most often I am not the one the person wants. This time the end of the sentence was, "Are you the Kulukundis who went to the Ruston Academy in Havana?" I was the one. The lady was calling to invite me to a reunion of Ruston students to be held later that fall in Miami. Ι was among the last students to attend Ruston as the school was closed in 1959, soon after Castro came to power and most of the families of the students had fled the island.

When I attended the reunion, I found myself sitting at a table with a lot of younger Cuban couples, most of whom were living in Miami and other parts of the U.S. One of the couples was planning to visit Havana, where their parents had lived before 1960. As the next generation, they wanted to see their parents' birthplace and find out what life was like there in 1995, the year of the reunion. But this one couple was the exception. No one else at the table had any interest in what life in Havana was like, and no one asked the couple anything about their upcoming trip.

Another interesting fact about the other Cuban couples was that they could all have been Greek friends of my parents sitting around a table at a country club in Westchester in the nineteen-forties and fifties. The men were formally dressed in dark suits, white shirts and ties, the women with carefully coiffed dark hair, eye-shadow and a lot of jewelry.

I felt I had gone back in time to revisit my parents' life, and I realized how well my parents had fit in to the society in Havana when we lived there. In many ways, my Greek mother had been happier there than in Westchester.

My own memories of that time are those of a ten-year old, but they are nonetheless vivid for being so. I remember the chameleons stopped in mid-crawl up the rough-hewn wooden posts that supported the veranda, their reptilian heads and torsos appearing in outline only when they moved. I remember an insect in the garden which we heard but never saw, which sometimes made you feel there was someone at the window, continually calling, "Psst!" Every Thursday, the freshly minted lottery tickets would come out, in different colors with the raised numbers on every page, seeming to be something of great value, only to be thrown away when they did not come up winners. I used to collect them from where they were discarded, and those that were clean I saved in neat piles which made them look like stacks of bills I had seen in gangster movies. I remember the food--arroz con pollo, chicken with saffron rice, punctuated with red flecks of pimento. In the afternoons in cafés on the boulevards, we would have dulces, resembling the Greek "sweets of the spoon"---dulce di guava (guava with cream cheese,) dulce di coco (the same with coconut,) and the greatest treat of all---a tall glass of frosty deep red watermelon juice to be sipped through a straw.

My fourth and sixth grade years at Rye Country Day are almost a blank, but my memory of my fifth grade year in Havana is full of vivid images, sounds and smells. One image among them was particularly poignant---the people I saw in the fields we passed on our way to school. In my forthcoming book Bold Coasts, A Life's Adventure in a Greek Shipping Family, I say I had my first glimpse of real poverty when we lived in Havana---"campesinos working in the fields wearing no shoes, a sight unknown in Westchester."

But how do you find the location of a house that may no longer exist? You can't drive up and down all the streets of an entire city to search for its remains. To find the house with the thatched roof where we lived at the beginning of my eleventh year, I have only two facts for reference points--the fact we drove for forty minutes to get to school, and the fact that my school the Ruston Academy was in the center of Havana. Using those two facts as coordinates, I can draw a circle with a set of dividers, with a radius of a forty minute drive from the center of the city.

Looking at a map of Havana, it is easy to see that there was only one direction we could have taken from Ruston to get to our home--that is the direction of the suburb of Miramar, which is now the location of many foreign embassies, including the giant tower of the Russian embassy which was built in 1989. It is as though after the Berlin Wall had come down, the Soviet government knew the end was near and wanted to leave something impressive behind to prove to the world that the Russians had once been there. On the Quinta Avenida, Fifth Avenue, the main artery through Miramar, drivers have to maintain a minimum speed. If they want to go slower, they have to take the Septima Avenida, (Seventh Avenue) where they can park and look in shop windows.

Beyond Miramar, the land is flat and may once have been farmed, so that a ten year old American boy for the first time in his life could have seen campesinos without shoes working in the fields. There is no house there that could have been ours. But in a district called Cubanacan, beyond Miramar, there is a restaurant called El Rancho-- which is favored by the Castro brothers where the government entertains visiting heads of state, most recently, the King of Spain.

El Rancho was built in 1979 and happens to have a thatched roof. Is that a coincidence? Or was it inspired by a house with a thatched roof and a sumptuous garden called El Bohio that once stood there?

If you want to pursue the question, we'll have to meet in Cuba.

© by Elias Kulukundis
All rights reserved.