Planting bulbs is as close to a sure bet as a gardener ever gets. Unlike shrubs, trees and perennials, most bulbs can only be planted in the fall. Consequently, it's now or never!

Since no real gardening is done in the winter, do a little planting now, then sit back and enjoy the flowering of winter. The gaiety of the early bloomers quickly turns a dreary winter garden into a frolicking playground, lively with the coming and going of little flowers. 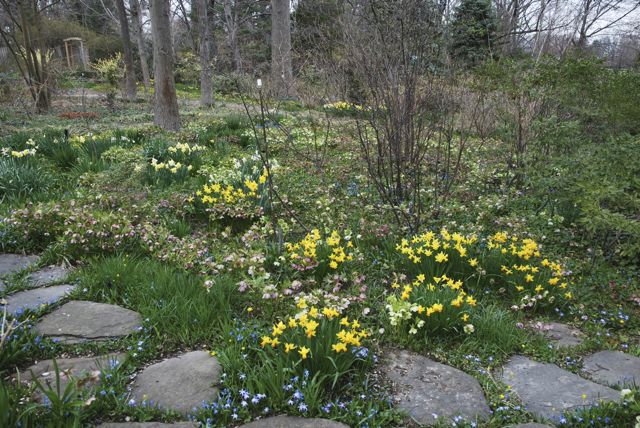 Consider the possibilities - in early to mid-winter, depending on your location, it is possible to have a group of snowdrops drift in and mingle with winter aconite. Shortly after, crocus could join them. As the snowdrops and winter aconite begin to depart, glory-of-the-snow, Siberian squill, dwarf iris, and puschkinia might arrive. The early blooms of daffodils overlap with them all. The huge choice of colors and styles among daffodils makes it possible to plant early, mid and late bloomers for two to three months of flowers. And, the bulb list goes on with snowflakes and wood hyacinth joining in mid to late spring. 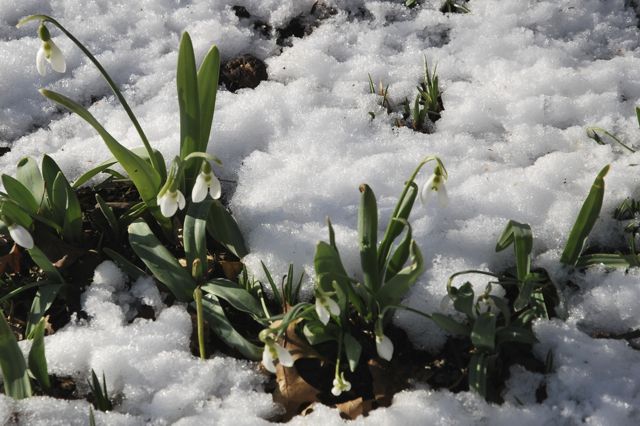 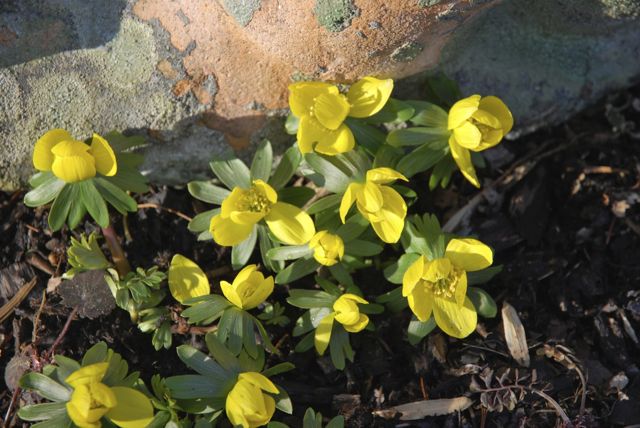 You might have noticed I skipped tulips, the most popular bulbs. I do plant a few dozen each year, but it is a frivolous expense, not an investment in my garden's future. Tulips are expensive and they don't reliable return after a year or two. They certainly won't naturalize. All of the other bulbs I mentioned naturalize, if happy, and return year after year increasing in numbers and beauty. The more reliable the bulb, the less it costs. Go figure!

If you think you don't have room, think again. Winter blooming bulbs are the easiest to place. Despite their small stature they are easily seen in winter since so much of the garden is bare. It is a common misconception that each plant needs its own square footage. Bulbs are gregarious creatures, only awake for a few months, dozing most of the year. They are most at home snuggled up to other plants.

Early bloomers, snow crocus, snowdrops, winter aconite and dwarf iris are bulbs about the size of your little finger and easily tucked under a patch of lawn or between late arriving perennials in the flower border.

I know lawns are sacred places for many a man on his mower, but the early bulbs disappear without a trace by the time the lawn needs mowing. Woman love the look of a close-cropped meadow blooming in late winter, and it is simple to dig up and roll back a piece of lawn just big enough to poke half-dozen early bulbs into the ground. Most bulbs are only planted three or four inches deep. The lawn is replaced with no damage done.

Many backyards lie in the shadows of deciduous trees and shrubs. Under and around them is the perfect place to plant early bloomers. The bulbs bloom in the winter sun before the trees and shrubs leaf out. 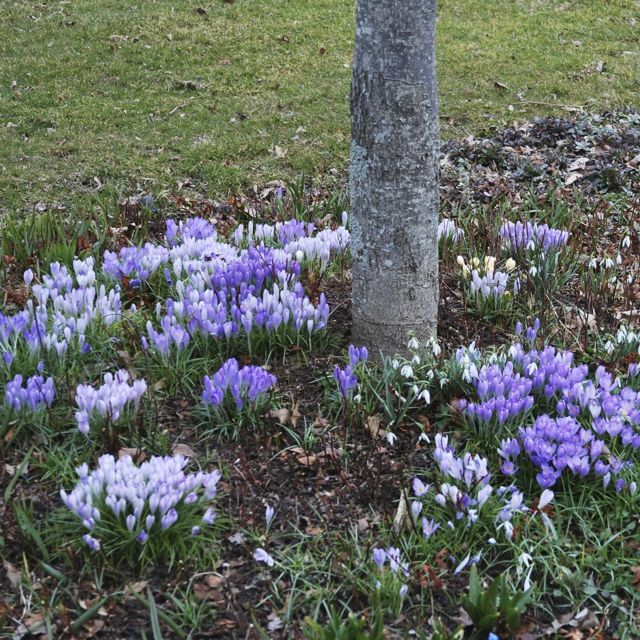 Pachysandra and vinca, the most popular groundcovers grown across America, can be filled to overflowing with the taller, later-blooming bulbs. "Drill and drop," is how one gardener explained his method of planting bulbs into pachysandra. He used an electric drill, battery operated, to dig the holes as a friend walked behind and dropped a daffodil or wood hyacinth bulb in each hole. The planting was swift and the results get better every year as the bulbs increase in number and beauty. Bulbs pop up at their appointed time to bloom for a few weeks or a month. Once finished, they depart. In their retreat, the groundcovers' leaves easily hide their dying foliage. By planting a progression of blooms into a groundcover it becomes an ever-changing tapestry.

My favorite method is to dig a bucket-sized hole, 12 inches in diameter, nine inches deep, among perennials, hosta, astilbe or daylilies that send up their foliage after the bulbs have bloomed. On the bottom of the hole I spread two inches of compost. Then I plant eight daffodils and cover them with enriched soil (compost mixed with the topsoil removed from the hole). When the hole is four inches deep, I plant a dozen Siberian squill and cover the bulbs up to two inches from the top. Then another dozen snowdrops before the hole is completed filled up. The snowdrops bloom first, followed by the Siberian squill and daffodils.

The planting of one, bucket-size hole could be repeated, planted in drifts instead of circles, around the trunk of a spring-flowering tree or shrub. Select the bulbs that appeal to you, check what depth each should be planted and layered accordingly.

The challenge of bulbs, as you've probably guessed, is not in the growing. Even friends of mine who don't consider themselves gardeners grow bulbs successfully, with minimal effort. The challenge is combining bulbs of different varieties with groundcovers, perennials, annuals, shrubs and trees.

Get the jump on next year's garden. A fall planting of bulbs is the gift that keeps giving as the bulbs increase in numbers and beauty each year.
http://www.suzybalesgarden.com/index.html 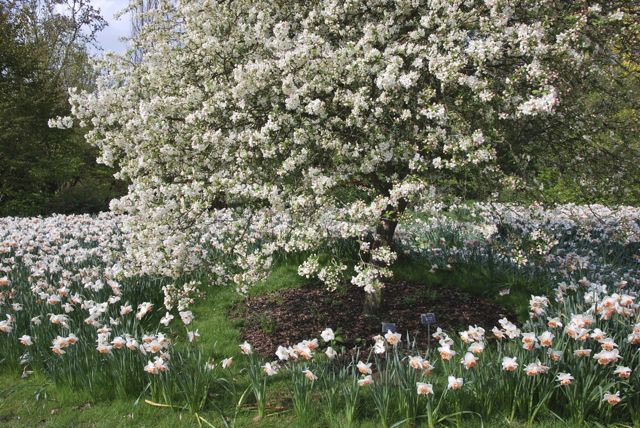