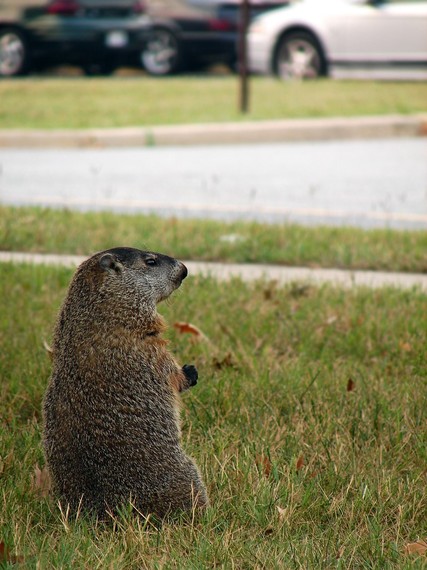 My teenager was riding shotgun, texting and rolling her eyes at pretty much everything I said as I drove along the highway. Somewhere along the way after puberty kicked in, I became an embarrassment to my kiddo; everything I said, did and wore invoked the rolling of the eyes. Today was no different.

"Hey, groundhog!" I shouted, pointing in the direction of a giant critter eating clover by the side of the road.

"Mommmmmmmmmm," she said, rolling those teenage eyes skyward yet again, "You do know you're, like, 40 years old, not 4 years old."

"Getting happy about groundhogs is for little kids."

"It is not! Look, groundhog!" I pointed out another one, this one standing on its hind legs, surveying the cars driving past.

She shook her head and put her headphones on to listen to "her" music since my taste in music is cringe-worthy to her teen ears.

I thought about her comment as I drove. I think it's OK to be 41 years old and still looking for groundhogs in the grass as we zoom along the open road. I think it's alright to be excited about furry creatures, rainbows and even lightning.

There were years that I didn't look for groundhogs. I was wrapped up in trying to impress people with my job title or my college degree, on a perpetual quest for both romance and the almighty dollar. It's fine to want money and fine to want a good partner, but I was so immersed in what I didn't have that I didn't notice all the good things happening all around me every day. I didn't notice the quiet after a big snow or appreciate the smell of the roses that briefly appear on the untended bush outside my house.

I had a wake-up call when my friend died of cancer in his 30s, only one year older than me. He had gone into the hospital for treatment, and we'd texted some about silly stuff. I was expecting him to be on the mend and out of the hospital in just a few days, same as always. I figured people in their 30s don't die from cancer because they are just too young, too strong. I was wrong, and I sobbed so hard at his funeral service that I nearly barfed in the pew.

That's when I understood that today is all we have. All the trappings I was chasing were meaningless, because not one person at my friend's service discussed how much money he earned or where he went to college or what kind of car he drove. All anyone talked about were the special moments, memories from the campfire or a silly prank he pulled on a friend. I thought about the slightly vulgar t-shirt he bought for me at a KISS concert when we were teenagers and about how he'd sing while he drove, loud and proud, even when the windows were down.

I couldn't watch as they lowered his casket into the ground in the cemetery outside the church. I stood in the parking lot, facing away from the hole in the ground and tried to catch my breath, calm the sobs and I promised myself to live a better life, one of those promises we all make in the face of death or immense sorrow.

On the drive back home, I realized I could do something very simple to live a better life: be present and be aware. That's when I started noticing the groundhogs, and as silly as it sounds, it is an easy way to stop worrying about the past or fretting over the future.

If I am noticing the groundhogs, I am present in the here and now.

It's easy not to notice the groundhogs or blooming flowers or even the smiling faces in a crowd if I am caught up in my own drama. It is easy to get swept up in meaningless negative mental chatter. Noticing the groundhogs takes practice. Be here now: look for groundhogs.

What do you do regularly to bring your wandering thoughts back to the present? I look forward to your comments!