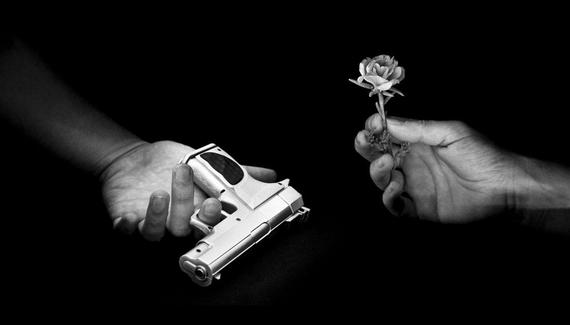 The last image that I saw of my dad, was when he was laying in his casket. He looked so peaceful and it was at that moment that I realized I would never hear from him again. Prior to that I had only seen him twice before, when he was being pushed into an ambulance with a bloody patch covering his forehead and when I had given him my last hug on Father's Day 1999.

It's a story that I've told a few times and each time I tell it, it feels as if the terrible events happened just yesterday. It's a common scene and an unfortunate story that is told too often while trying to live and thrive in the city of Philadelphia.

The amount of gun violence that Philadelphians experience is nothing new, but the question that keeps coming up at each crime scene and each vigil is what will be done to address the ongoing problem?

The situation is dire and it does seem bleak at times. The Philadelphia Daily News just a few weeks ago reported that the City has recorded 78 homicides since Jan. 1 of this year, up 17 percent from the same point last year and the highest since 2012.

I can't help but be hopeful as I look around my North Philadelphia neighborhood that things will get better. I understand the struggle and as a young Black man I live it, but as I walk the streets that are stained with past memories of lost ones I still find myself hopeful for better days.

I see those "better days" each time I see the crossing guard who has worked in my neighborhood for years greet school children every morning with a smile. I see it when a person in their 60s visits the local community center to obtain a GED or learn how to become a user of technology.

I see it in a memory, when in late 2009 a former co-worker of mine Yvonne Bailey had just re­turned to her apartment at Row­an Homes when the shooting star­ted that Wednesday night. Eight bullets entered her home, hit­ting walls and nearly striking her then 5-year-old daughter.

A rally took place two days later where Bailey took a stand, yet she seemed lost for words she stood beside her husband and daughter, thankful that she and her family were ok.

But as it always does, reality struck. It was during this rally as speeches were being made and children were holding up signs that read, "Gunmen, you're killing our loved ones" that a man yelled from down the street asking what was it that he could do? And that the violence surrounding the neighborhood was not a bother to him.

And it's true to a certain extent that those in my neighborhood, and others, we have become complacent to the gun violence surrounding us. It's not uncommon at all to suddenly drop to the jagged and cracked streets when hearing a noise resembling that of bullets being fire. Or seeing a man wounded from a gunshot pass your place of employment dripping blood and seeking help.

The daily struggle in Philadelphia is indeed real and it runs much more deeply than the need for jobs and education, I think that's just the starting point. Much more should be done and I believe much more can be done. It will take the collective work of Philadelphians and those who are in power fighting to represent us.

It seems like a long and difficult road, but one that is worth getting to. Something has to change so that the memories that I continue to hold become images that I can say I rarely see.