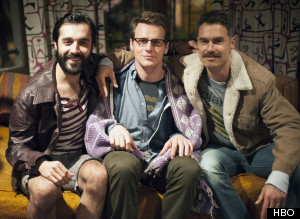 Around this time last year, HBO debuted the second season of "Enlightened," which remains one of the finest seasons of television the network has ever produced. It still haunts me, and I'm still crushed that it's gone.

One year later, it's bittersweet to welcome "Looking," another quietly observational half-hour show that catalogues the faults of its characters while never losing sight of their humanity.

In a perfect world, "Enlightened" and "Looking" would not just coexist but resonate with each other. Both are concerned with loneliness, connection and the possibility of bliss; both are understated yet ambitious in their own ways. But apparently money -- or, in "Enlightened's" case, patience with low ratings -- aren't in endless supply, even at HBO. So the difficult Amy Jellicoe had to make way for the less difficult Patrick (Jonathan Groff), "Looking's" charmingly flawed lead character.

"Looking" chronicles the lives of a group of gay men in the San Francisco area, and it's so low key and unassuming that it took me a while to remember the characters' names. This isn't a show that's overly concerned with exposition, plot or dramatic tension, nor is it simply the gay version of "Girls," even though comparisons between the two will be inevitable and partially justified.

As in "Girls," "Looking's" main character is a college-educated white person with good intentions and an impressive talent for obliviousness. Yet the characters on "Looking" are both more diverse -- there are Latino and African-American men in the cast -- and older than Lena Dunham's ladies. The men of "Looking" are well past the hurdles of post-collegiate life and starting to question where they're going as they circle age 30 -- or in the case of Dom (Murray Bartlett), 40.

"Looking" has much to recommend it: The performances are nuanced and subtle, the mens' quests for different kinds of emotional and sexual intimacy are handled with matter-of-fact confidence and skill, and executive producers Andrew Haigh and Michael Lannan depict every apartment, every hookup and every club outing with a granular level of detail. Those making the show clearly know the worlds in which they're traveling, and everyone who's ever been a struggling, ambitious urban type -- gay or straight -- will likely see themselves in the lives and bickering-yet-warm friendships of Dom, Patrick and Agustín (Frankie J. Alvarez).

Though the main cast is skilled and Bartlett's performance as a man struggling to reach his potential is particularly affecting, "Looking's" guest stars nearly steal the show. Russell Tovey is terrific as a manager at the video game company where Patrick works; Groff's furrowed brow gets a particularly fruitful workout as Patrick tries to navigate the blurry line between his personal and professional aspirations. Patrick's boss unnerves him in both arenas, which is partially intentional on the part of Tovey's well-drawn character.

As he did in "Behind the Candelabra," Scott Bakula steals every scene he's in. He plays an older gay man who wryly observes the dating and mating habits of the younger generation, and he brought such warmth and depth to the character that one of my main takeaways from "Looking" is that Bakula, who was similarly great in "Men of a Certain Age," should be cast in just about everything. In any event, Bakula's presence and air of experience add weight and depth to a show that occasionally seems too slight for its ambitions.

Sexuality is central to the character portraits that "Looking" is building, and it's refreshing -- if long overdue -- for an HBO series to consistently put the intimate lives of gay characters at the center of a show. Sometimes the encounters in "Looking" are hot, sometimes they're awkward, and sometimes they're amusing (I loved the line Dom's roommate unleashed after he hooked up with a much younger guy: "Did you f*** the pain away with the cast of 'Wicked'?").

There's unflinching honesty in the depiction of sexuality here, and that's where the "Girls" comparisons are most apt. These characters are not often sure what they're looking for -- friendship, companionship, excitement, novelty or even business advice -- and their stumbling attempts to establish connections are depicted with both warmth and dry humor. Smartphones, social apps and dating sites may be more common than they were a decade ago, but human beings remain as imperfect and mistake-prone as ever, and the confusion and even condescension Patrick displays as he searches for romance is intelligently depicted.

That said, it struck me as I watched "Looking" that even pay cable networks, for the most part, are extraordinarily wary of showing male full-frontal nudity. If the first four episodes of "Looking" had any, I missed it, and perhaps that omission is just as odd as HBO having aired a show about a male prostitute ("Hung") that similarly shied away from showing nude male characters in full.

I bring this up partly because of the extensive and ongoing discussions about the uses and pitfalls of different kinds of nudity on TV and on HBO in particular. You can't swing a dead cat without hitting a think piece about the male gaze as it relates to "Game of Thrones" or an impassioned essay about the uses and intent of nudity on "Girls." It's difficult not to arrive at the conclusion that supposedly adventurous pay-cable networks are fine with female characters showing everything and then some, but it appears that dudes are still exempted from that requirement.

I simply wonder why that's the case, and I wonder if it will hamper "Looking's" quest to depict the intimate lives of these men in complex and forthright ways. Put bluntly, it begins to feel a bit absurd that the camera stops where and when it does in "Looking's" sex scenes. If HBO wants its shows to be truly adventurous, ambitious and honest, why not level the playing field, as it were?

Of course, the double standards regarding male and female bodies is a problem in Hollywood as a whole; the responsibility for the strange contours of that situation can't be laid at the door of "Looking," which is certainly worth watching. I sometimes wished the show would raise its temperature a bit; "Looking" has a measured quality that can make it seem occasionally tepid.

Yet Patrick, Dom and Agustín are welcome additions to the TV scene, and I look forward to seeing how their interwoven lives develop. The world of "Looking" is specific and distinctive, but what its characters are searching for feels universal, even if these men can't always articulate what that is.