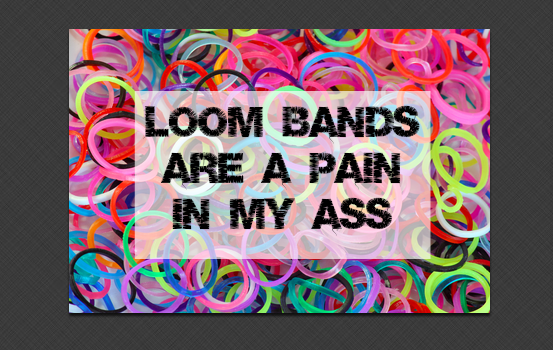 We've all seen them. We all have them. The moment the Loom Bands enthralled our young ones and became a Justin Bieber-like sensation, our lives were forever changed.

1. My Vacuum: I decided we needed the creme de la creme of vacuums for the rare occasion I decide to use one. I couldn't afford to purchase said vacuum, so I put it on a payment plan that allowed me to take it home, only to pay it off for the next two years. (Genius, I know.) I am about sixpayments in and about 18 away from the last payment. Imagine my horror when that perfect, white beauty of a machine sucked up a Big Foot's sized handful of Loom Bands. At first I couldn't decide what made me angrier: the Loom Bands, my choice to buy a ridiculously priced vacuum, or my area rug with shag deeper than the weeds in my backyard. The rug hides everything in its beautiful tan strands which is great... except when it's hiding five thousand Loom Bands and I decide to do my annual vacuuming.

2. Mistaken Spiders/Animals/Zombies trying to kill me: I have woken up mid-sleep, certain a zombie was on the brink of gnawing off my foot when in reality, a purple Loom Band was stuck around my toe. Does my daughter "Loom Band" in my bed? NO! How did it/they/those demons get there? I am still pondering that one...

3. My Dogs: If my dogs wore braces and needed rubber bands, we would be set. I cannot tell you how many times I've caught the dogs sniffing at the rubber loom bands to only walk away with one, two, three, or nineteen of them stuck to their black, wet nose. The Loom Bands are even messing with my dogs.

4. The Add-Ons: Twenty dollars seemed harmless enough to spend on a toy that ended up being absolutely in-fucking-possible to do. Have you read the instructions that come with that beast of a kit? Yeah, they may as well be written in Tagalog. So, what is a mom with a kid crazy about "Loom Band Madness" to do? Oh, not to worry! There's a book you can buy for an additional $14.95! Back to Michael's we go... after watching a YouTube tutorial made by some 9-year-old who I'm certain is jacked up on sugar. There is absolutely no humanly way possible to assemble a bracelet that fast. It's like watching Ping-Pong Olympics on fast-forward.

5. Loom Band Wardrobe: Yes, you've read that correctly. After we mastered the "single strand loom band bracelet" (A.K.A the easiest bracelet to create) that resulted in 19 different attempts and 12 consecutive hours of construction, our child finds out that you can actually assemble Loom Band Purses, Loom Band wallets, Loom Band pants, and who fucking knows, you could probably make a Loom Band House.

6. Heads of Hair: I've had to cut out at least nine loom bands from my daughter's hair when her creativity got the best of her and she decided to Loom Band her own head. A Loom Band does not a hair tie make. Sadly, she's learned this the hard way and is reminded of that each morning when we style her wildly unevenly cut mane.

7. The Drain/ALL Drains: I have found Loom Bands lurking in both bathtubs of our home. No, my daughter does not Loom Band in the bathtub. Actually, who knows, that one could possibly be happening.

8. Washer and Dryer: My lint trap is no longer holding any actual lint. It holds primarily gum wrappers my daughter leaves in her pocket (she is not allowed to have gum) and as imagined, Loom Bands. There is nothing like the smell of wintergreen and burning rubber permeating from your freshly cleaned clothes.

I have found these little demons in every single crevice of my home and I feel as though there's a Loom Band monster that secretly sneaks out at night and tries to mess with me by sprinkling these rubber assholes all over my home. They are in the dishwasher, the car, the tub, the office, and most likely in places I'd never even think to look. I wouldn't be surprised if my printer spat a Loom Band at me or if my Keurig coffee maker started pouring out Loom Bands in place of my morning Joe.

Ashley Alteman is the writer behind SmashleyAshley.com where she details her laugh-out-loud parenting and personal fails. Ashley also writes for BLUNTmoms.com and can be found rambling about dinosaurs and her wild child, "Barb Marley", on Facebook.