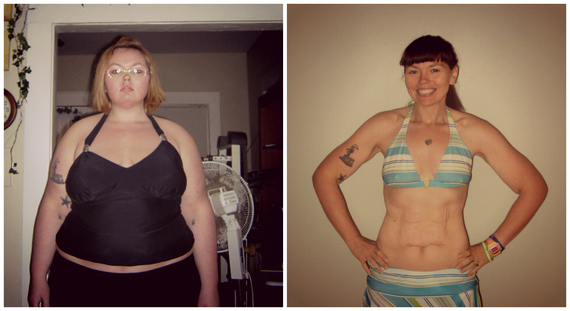 I need to fess up about something. After I had lost 150 pounds, I was deeply disappointed with how my body looked. When my weight loss journey began back in 2009, I had false expectations of what I would look like naked after losing half of my body size.

With every piece of skinless chicken breast I put into my mouth and every bicep curl I did, I believed I would look like that smiling, perfect fitness model on the cover of every mainstream fitness magazine. Boy, was I wrong.

Loose skin is a real concern for anyone with a large amount of weight to lose. Maybe that's why Google returns 3,800,000 search results for the term "loose skin after weight loss." No matter how much I read up on the subject, I was left feeling like maybe (just maybe), I was the lucky one with a good genetic background that would not have an issue with saggy skin.

Even though I lost weight rapidly (150 pounds in less than a year) without weight loss surgery, I did everything else right. I ate my vegetables and lean meats. I took supplements. I drank tons of water. I lifted really heavy weights. All of this probably saved me from some of the saggy skin issues I could have faced, but I was still left with about 5-10 pounds of excess skin just hanging on for dear life.

Because I allowed myself to have such high (false) hopes about my weight loss, I often felt more dissatisfied with my new 150-pound body than I was with the 300-pound body I once lived in. However, it wasn't my body's fault that it wasn't living up to my mind's flawed expectations.

Naturally, I considered other options for banishing flabby skin. As recently as just three years ago, I was still spending hours on my computer researching surgical options and payment plans.

Initially, I delayed surgery because I read somewhere that it was important to sustain a weight loss for at least a year before going under the knife. It seemed like sage advice since most people gain the weight back soon after losing it.

After a couple years of maintaining, I continued to want surgery but postponed because my new husband and I wanted to start a family. Once again, it didn't seem like a clever idea to have a tummy tuck if I planned on pregnancy.

Eventually, I realized that if I had skin removal surgery, it would have ONLY been for the sake of vanity. My extra skin did not hold me back from enjoying any bit of my life. In the last six years of maintained weight loss, I've run two marathons, five half-marathons, and countless other races. I've climbed a mountain, jumped from an airplane, and worn a swimsuit in public... all without my loose skin being a hindrance. Excess skin is not hazardous to my health.

As the years continued to pass, and my weight loss maintained, I started accepting my new body more and more (without shame and disgust). Now, I want more than anything to continue being a good example for my clients and other women who are on weight loss journeys of their own. I stand for what is possible with weight loss that anyone can do (without dropping a small fortune on an elective surgery).

The only perks of skin removal surgery for me would be the fact that I would be able to fit into a clothing size 2-3 times smaller than what I currently wear, and I would appear slightly smaller in photos. Now, I'm smart enough to know I don't need that to be happy with myself.

The downside to this surgery is a bit more extensive. It would have resulted in irreversible scars all over my body, I would run the risk of complications due to the surgery, I could still gain some weight back and the surgery would have been pointless, it certainly doesn't fix emotional problems, I would lose some of the respect and admiration from others (because I did something many others can't possibly do), and I would feel like a complete fraud.

The only time my loose skin is a problem is when I allow myself to feel self-conscious about it. When I run, it whips back and forth on my upper arms. It jiggles on my butt when I'm in aerobics class. It takes a nap on the floor when I'm doing pushups. And it's like gravy freshly ladled into my B-cup bra (you're welcome for the visuals).

Long story short: You won't see me get bent out of shape if The Huffington Post chooses not to use my "bikini photo" for this blog post because of my saggy abs, and I certainly won't decide one month later that I want to have abdominoplasty surgery because of it. Aint. Gonna. Happen.

If you had some extra skin hanging around, would you get it removed? Why or why not?