The premiere of a new American opera is always a cause for celebration, and a work for children is especially heartening since today's youth should be tomorrow's audience. But the rehearsal phase of Lori Laitman and Dana Gioia's The Three Feathers also offered "something rare," according to Ruth Waalkes, executive director of the Center for the Arts and associate provost for the arts at Virginia Tech, where the opera debuts this week.

"The idea of commissioning a children's opera," Ms. Waalkes says on the phone, "started with Ariana Wyatt, a voice faculty member, when she and Scott Williamson [general and artistic director of Opera Roanoke] were forming a partnership between our students and Opera Roanoke. This had instant appeal to me. The Center for the Arts would be part of a project that would bring an opera for young audiences into the repertoire and also create an amazing opportunity for our students and faculty to work directly with its composer and librettist."

Rare, indeed. From years of profiling classical artists I can attest that many singers spend their careers performing traditional repertoire and never work with an opera's creators. But as I wrote this piece, Lori Laitman and Dana Gioia were both heading to Blacksburg, VA, to work with their cast: opera and musical theater students at the Virginia Tech School of Performing Arts.

But this is business as usual for Lori Laitman who often collaborates with singers, coaching those who perform and record her catalogue of renowned art songs. She also wins praise for longer works, and her full-length opera The Scarlet Letter (with libretto by David Mason) will have its world premiere at Opera Colorado in May of 2016. But she hasn't written a children's opera before, and in an interview at her Maryland home, she tells me she received her first query from Professor Wyatt via Facebook in November of 2011. After agreeing to participate, she chose Dana Gioia, poet and former chairman of the National Endowment for the Arts, as her librettist.

There was an instant comfort level between partners because Ms. Laitman and Mr. Gioia had already collaborated on many art songs; Mr. Gioia had also written two opera libretti, Nosferatu and Tony Caruso's Final Broadcast for other composers. Both admit that their first task was finding the right text.

"We wanted to have a strong story that appealed to both kids and adults," Mr. Gioia explains in an email:

There's nothing better than Grimm's Fairy Tales for compelling plots and memorable characters that quietly speak to our deepest fears, fantasies, and desires. At the heart of Grimm's best tales is a young person's quest to find love and meaning in a world that seems scary and chaotic. Lori and I chose The Three Feathers because it was a great story that almost no one in America knew. Disney or Broadway had never touched it...And who can resist an underground world ruled by a giant Frog King?

Lori Laitman adds, "There's also an upperworld with three princesses: Dora, the heroine, sings a soul-searching aria, 'Just Once,' and there's an aria for the shopaholic Gilda and one for the athletic, bossy Tilda. While there are similarities in the lyrics for these princesses, I wanted to create distinct character differences in the music so each one had her own motif. When they return you can instantly tell which princess it is because of what's happening in the orchestra." 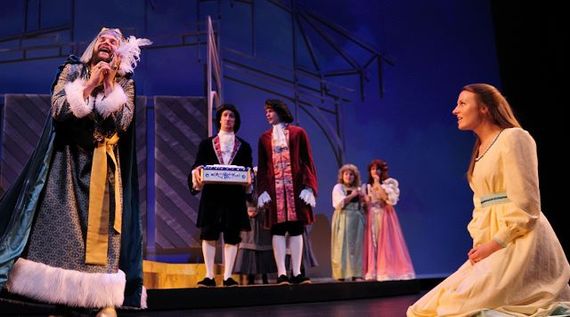 The upperworld King shows one of the feathers to Dora. Photo by Virginia Tech.

"Also, since there are three children's choruses," Ms. Laitman says, "we wanted to have bats, rats, and frogs, the denizens of the underworld. The opera has a very large cast, and all the kids sing except for a few supernumeraries. Here's where my prior experience was helpful, because I'd written the oratorio Vedem for a boys choir. And when you're constructing musical lines for children you have to keep in mind that their ranges are different [from adults], and you have to create music they can learn that is instantly memorable to them."

Given the whimsical tone of the text, Dana Gioia chose to write all the songs and choruses in rhyme. "That's what kids want, and so do adults, even if they won't admit it. Our opera needed to be both fun and at times mysterious. Comic opera needs rhymes and magic naturally lends itself to rhyming spells. Oddly, writing a rhyming libretto nowadays is slightly avant-garde. Most of the new libretti I see are in free verse."

Both Ms. Laitman and Mr. Gioia are quick to sing the praises of their director, Beth Greenberg, who spent 23 years staging operas for New York City Opera, among her other credits. "Beth's a huge influence because she has such vast experience," says Ms. Laitman. "Even before I started writing the music she was there and she was very helpful. She's very specific with her comments."

Mr. Gioia agrees. "Once I finished my first complete draft, Beth and I talked through the staging and pacing of every scene. We came up with some very good ideas at a point when they could be seamlessly worked into the text. There were also several moments of visual comedy that she helped clarify."

I caught up with Ms. Greenberg by email when she was already rehearsing her cast. "One of my jobs as director," she says, "is to visualize, with support from my design team, the scenes and magic of the show. This means developing seamless set changes to move quickly from a fairly-tale European court to a dark and surreal underworld. Early on I knew it would be essential to show Princess Dora's descent to this underworld, filled with danger and magic. Every ticket-buyer wants to ride with the show's journey. Lori, Dana, and I worked in tandem to tailor the story and move forward at every turn."

As a bow to practicality, Ms. Laitman wrote The Three Feathers for a chamber orchestra of sixteen players. "It's very complete," she says, "with a flute, piccolo, oboe, bassoon, clarinet, two trumpets, trombone, timpani, piano, harp, two violins, viola, cello, and bass. I have enough instruments to give me all the colors I wanted."

Ms. Laitman is grateful to the arts faculty and administration at Virginia Tech and hopes her new opera will also find a home with other companies. "I really had a blast with The Three Feathers," she says. "It was so much fun to write for princesses and other characters in a fairy tale, and it ends very happily."

Director Greenberg shares the composer's enthusiasm. "Virginia Tech's motto is 'Invent the future.' With imaginative set design by faculty member Randy Ward, using cutting-edge technology available here, we're able to create some magical and entirely new theatrical effects. We hope to have children and adults squealing in their seats. And this new opera with wonderful children's roles should appeal to future producers and secure its place in the repertory."

The Three Feathers will be performed at the Moss Arts Center at Virginia Tech on October 17, 18, and 19. The conductor will be Scott Williamson, and the performers will be students from the Virginia Tech School of Performing Arts, Opera Roanoke, and the Blacksburg Children's Chorale. For tickets call 540-231-5300.

For further information about The Three Feathers, visit the composer's web site at www.artsongs.com