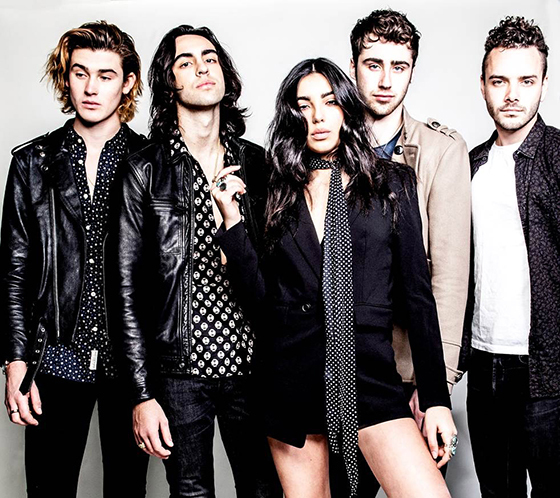 The brother and sister duo of Brandon and Savannah Hudson, who head the band The Heirs, are originally from Florida, but now make Los Angeles their home. Their music invokes a positive, energetic youthful experience, but with an edge of maturity felt beyond their years with Brandon currently 18 years of age and Savannah only 16 years old. With a lifelong connection to music, they are already soon on the way to becoming artistic veterans.

The Heirs released an EP back in August title Ecliptic that is sort of the beginning of the story of this band, with many more chapters to follow. Regularly used to the warm weather of the west coast, I was able chat with Savannah Hudson as they travel down the cold, wintery highway on their way to the Detroit show and we talked about their live shows and the development of the band.

How's the tour been thus far with The Big Pink?

It's been great. All of the places have been really cool. The venues have been awesome. The Big Pink is a really great band and they are super sweet, so its been good. We love touring. We're definitely a touring band. We like to play shows every night. We love playing shows in general. Wherever we can get out and perform and have a good time, we love to do that.

How would you describe your live show?

Our live shows, we try to make them into an experience. I feel like we like to have the whole set as a cohesive piece, like a journey almost for every person that comes and watches. We want them to enter our world of music and just enjoy themselves in that and not think about anything else besides the music they are listening to. We try to focus on that a lot too. We dance a lot! Brandon and I and Alex and Eian are all kind of hip movers so we dance a lot and we interact with each other. It's a good time.

Has it gotten to the point where you have a nice footing with your stage how? Do you feel comfortable up there?

Oh yeah! After we played our first couple of shows together on this tour, it's kind of like the band of our hands now. We just get on and have a good time. It was definitely nerve-racking the first few just because we were getting all the kinks out and didn't really know what was going to happen, but now its super comfortable. Obviously, I can't speak for everyone, but I think I still get a little bit nervous before any type of show, but it's a good nervous, not 'Oh no! Am I going to mess up?' nervous.

When you're on stage looking out into the crowd, what goes through your mind?

So many things, I guess I hope the people who are watching are receiving the music in a positive way and that they are relating to it, enjoying themselves.

Do you feel like you get a great reception for the music that you have out thus far from the crowds?

I think so. The EP has been out since August and we've been playing it everywhere we've been performing and everyone seems to like it. "Ecliptic" is one of the favorites. "Alright Goodnight" is a fun one. Live, we do this extended ending, its like a rock outro and that's one of my favorites to do just because we get to go crazy and all the boys get to bang on their instruments a little bit harder than they do in the rest of the set. It's great.

When I first came across your band, I didn't even realize that you and Brandon were so young. How old are you now?

You guys have sort of mature sound for your age.

Thank you. I think part of that has to with just we've been doing it for so long. I started singing and we started playing together when I was like 9 years old, so we had all that time to figure out what we liked and what we didn't like. As we are getting older, we were getting better at writing. Obviously, we're constantly maturing, but I think we finally found our sound that we love and we're just going to keep growing and getting better. That definitely had a big part of who we are now and why I guess we are so mature.

Why did you feel the need to start this band?

Brandon and I we always super involved in music and writing, and I think as we got a little bit older, we decided we wanted to take it seriously and we wanted to make this an actual thing and be an actual band. Once we found the rest of the members, we decided this is it. We're making the music that we love. We're writing the music that we love. Let's really start touring on it. We have a really solid fan base and I think they'll like it too. We just took a leap of faith and did that. It's been great so far. We got really great people involved in it.

Do you have a good relationship with the people that you work with outside of the band? Do they take you serious even though you are still so young?

I honestly did think that would be a problem when we were first starting out because I'm so much younger. At first, I didn't like to tell people how old I was because once I did, they were like 'Oh. You're a kid!' and didn't take me seriously. I just learned to prove myself with the music that I make and the music that I write, and I feel like I don't have to explain myself further than that, which has been great for me because its worked. I play the music we have and no one really asks me anymore. Its like 'Wow, you're so young. Its great that you're doing this.' I'm happy we've had good feedback on that and it's never been an issue. As long as we're good kids (laughs), which we mostly are, it's never really a problem.

The Heirs are currently on tour with The Big Pink and will be playing the Marble Bar (1501 Holden St.) in Detroit on Friday, March 4th. For more information on The Heirs, visit theheirsmusic.com.