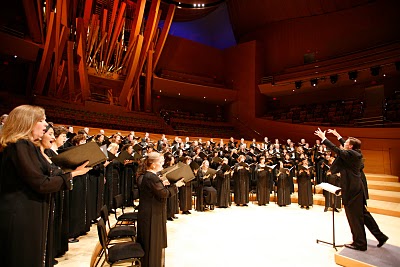 Disney Concert Hall will be the scene this Sunday of Franz Josef Haydn's glorious musical depiction of the biblical origins of life, as the Los Angeles Master Chorale presents his greatest work, The Creation. Next month, music director Grant Gershon rounds out his tenth season at the helm of the city's premiere choral organization with a program billed as "Ellington: Best of the Sacred Concerts." If the contrast between classic Austrian refinement and cool American jazz seems startling, consider it intentional.

A decade ago European choral traditions had lost a bit of steam in a city grown modern and multicultural. Gershon's challenge had to go beyond improving just the chorale's virtuosity and versatility, both of which he eventually did in excelsis. His biggest test was to help the ensemble regain its relevance in a vastly changing city.

Even as the multi-talented director, who recently turned 50, has kept the venerable organization's musical roots alive, he has also sought to build bridges to other traditions in the city's many component cultures. In that quest he has succeeded beyond anyone's wildest imagination. A canny artistic and marketing strategy is filling the Disney Concert Hall with not just music but also audiences. As it was in the less culturally diverse days of its founding director Roger Wagner, the Master Chorale is once again the musical voice of Los Angeles.

Central to the chorale's plan is the initiative "L.A. is the World," described by Gershon as "a multi-year commission project dedicated to creating dynamic new works for chorus and non-Western musicians to premiere at Walt Disney Concert Hall." It was launched in 2007 with an aim to "bind Western and non-Western musical traditions." The ultimate goal is to "broaden the definition of what 'choral music' means in this era of global interconnections." It is connected to local concerns "by the many world-class musical artists who have immigrated to Los Angeles and who represent an array of traditions with deep roots in their communities and cultures."

A related programmatic approach has had the chorale presenting a travelogue of concerts this season. Last fall included musical stops at French and Russian ports. (Relevant to Los Angeles: Russian is a language heard from Hollywood to Encino, and the Westside's Le Lycée Français is at the educational crossroads of L.A.'s surprisingly large francophone community.) Even the chorale's annual Messiah had a special twist this year with a performance of Mozart's later Viennese version.

Both of the chorale's most recent outings have employed the term "bridge" to celebrate resonances within Los Angeles communities to the contrasting cultures of England and Korea. 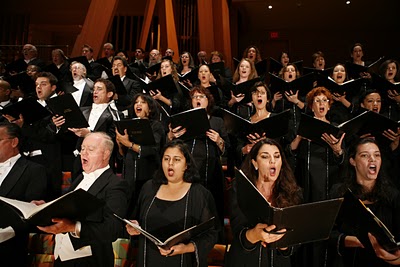 "London Bridges" on January 30 surveyed choral music of England, the staple of legacy music programs in the Southland's churches and schools whose graduates constitute the chorale's core membership. It was no surprise that the execution of the program was masterly. Soloists from the chorale's ranks ably complemented the works at hand.

Two masses, four hymns, and eight chestnut madrigals constituted the whirlwind survey of the Emerald Isle's vast musical legacy. William Byrd's ethereal Four-Part Mass, continuing a Catholic tradition in the Protestant England of Queen Elizabeth I, teamed with inner spirituality. By contrast, Benjamin Britten's Missa Brevis in D, sung by the women, suggested the quirky-sassy spikiness of the composer's French contemporary, Francis Poulenc. Judith Weir's Two Human Hymns, with flourishes and syncopated rhythms in the accompanying organ's Baroque registers, gave the chorale irreverently cheeky outings. ('You must sit down,' says Love, 'and taste my meat:' So I did sit and eat.) John Tavener's haunting Song For Athene, oft employed at funerals, ended the first half in an elegiac frame of mind. The madrigals in the second half compensated with lightheartedness, teeming with the frivolous fa-la-la's of love and leisure.

The distance from sophisticated London to a Korea of ritual and religion five weeks later required a bridge if not too far then at least as far as one could cross. A lively tradition of choral music on the Korean peninsula has been the legacy of missionary work begun there 130 years ago. Though its continuity was cut short in North Korea during the last half century, the tradition persists in South Korea in works that fuse Eastern and Western styles.

The chorale's local bridge to Korea was much shorter but until recently rarely crossed: that from the Music Center to nearby Koreatown, a community that boasts the largest colony of Koreans outside the country itself. And Disney Hall was well represented by those residents for its "Stories from Korea" concert of March 6. Results were mixed but the initiative opened the ears of the chorale's base audience with fresh sounds and made some new friends for the chorale from an important constituency in Los Angeles.

The program opened with a half dozen musical snapshots of colorful locales by contemporary Korean composers. Me-Na-Ri by Hyowon Woo felt like the gathering of tribes on a mountaintop, appropriate for a land that has been at the crossroads of struggle throughout its history. Chorale members were arrayed along the side aisles of Disney Hall's central area and sang antiphonally, supplemented with pounding percussion and gongs. An invocation of a new artistic presence, it was the evening's most effective piece.

Hyunchul Lee's Dona Nobis Pacem shimmered in trills with motifs in minor thirds, its harmonies a blend of East and West. Ben Jisoo Kim's a cappella Hangangsu Taryeong was a dissonant tone painting of the swelling, pulsing Han River. Heejo Kim's Gyeongbokgung Taryeong greeted the morning with a rhythmic lilt and pulsing joy in the opening of a gated royal palace. Jungsun Park's Dal-A Dal-A Bal-Geun Dal-A found moon-struck lovers planning their futures in close harmony and intervals of minor thirds and fourths. Hojun Lee's Arirang Fantasie had a hiker traversing Korea's most famous mountain peak in music perhaps a little too sweetly Westernized with consonant harmonies and twinkling piano arpeggios in a manner equivalent to Thomas Kinkade's idyllic paintings.

Featured in the program's second half was the world premiere of American composer Mark Grey's Mugunghwa-Rose Of Sharon, an ambitious work built around the poetry of Namsoo Kim, a Korean who, with his father, was caught up in the uncivil struggles of the Korean peninsula 60 years ago. It employs a solo violin, chorus and chamber ensemble and incorporates elements of a violin concerto, tone poem and dramatic oratorio. Grey's music does not try to duplicate Korean folk elements but rather suggest the setting.

According to Grey, the solo violin and the ensemble together "channel the voice of Namsoo's father" with the violin also playing a shamanistic role. Kim's impressionistic poetry provides emotional signposts as the chorus conveys the story of Kim's search, after his escape to the south, for his father in North Korea. Alas, it was not to be; the North Koreans had denied Kim's entry until long after his father's death. Whether referencing the struggle between north and south or evoking the traditional poetic images of nature, Kim's poetry inspired musical settings from Grey that conveyed generalized feelings more than drama. The mood migrated from uneasy to agitated and eventually to elegiac. Jennifer Koh's solo violin busywork was often lost within the thickets of the combined ensemble and Chorale, as finely performed individually as all these elements were.

Following the script at the work's premiere was a challenge for the audience, not especially aided by the relative lack of differentiated characterization in each of the five scenes with additional Prologue and Epilogue. With a work of such ambition and sincerity, however, further tweaking may more effectively realize the obviously heartfelt intentions. 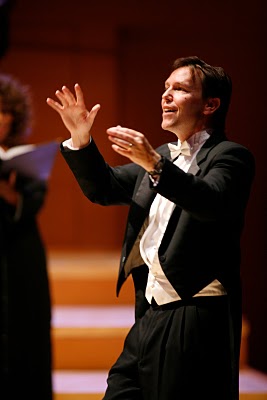 Next season will bring new musical adventures. One I anticipate in particular will be the performance of The Little Match Girl Passion by David Lang, a preview performance of which was presented with a complement of just four singer-percussionists at Santa Monica's Jacaranda Music Series earlier this year. (See review) It was led by a free-lancing Gershon, who was one of the singer-percussionists himself.

But before next season there are those two performances of Haydn's Creation this Sunday and the Ellington Sacred Concerts on May 22.

Neither should be missed. See you there.