I love taking walks. Long ones.

I start by choosing a direction. Then I let something lead me. I'm not sure what to call it--maybe it's intuition or some greater force. Whatever it is makes me walk for hours until it's time to find a place to stop.

My boyfriend Alan usually joins me.

Before we met, he'd roam from street to street in strange places where he was working as a cinematographer. He'd do what I do--pick a way and just walk. Then he'd become hungry or curious and stop at a restaurant or museum or city park. Wherever he ended up always seemed meant to be. Like he was guided there.

That's how it is with me.

Since I moved to Los Angeles seven months ago to be with Alan, people have told me that my need to incessantly walk will change. But it hasn't. I still walk, if not more than I did when I lived in pedestrian-friendly Center City, Philadelphia for fifteen years.

It's as if I'm committing an act of defiance in Los Angeles, traveling with my feet instead of a car. Why would I want to sit in a stifling vehicle in rush hour traffic when I can walk at whatever pace I like, with the breeze and sun in perfect balance? Why would I choose to be indoors when I could be outside, where the weather is always sublime?

Maybe it's just one of those things. Walking feels natural to me, like writing.

I course past a stagnant stream of cars and I am free. Or is it really the other way around? Maybe it is for them, but not for me.

If I were in a car, I'd miss the sound of hummingbirds.

On my first walk in L.A. I saw one. Alan and I were holding hands.

"The city is filled with amazing places to walk if you know where to look," he said.

He led me north that day and we found ourselves moving towards the Hollywood Hills. He squeezed my hand, leading me up a steep hill as the winding road narrowed, single file. Suddenly he stopped and I bumped into him.

When I thought I heard a swarm of hornets hovering, Alan held out his left pointer finger in the air, a soft landing space. The buzzing grew louder until a tiny hummingbird floated above his finger, almost touching. The bird's chest shone pearlescent green and his neck dark red, almost onyx. When he lifted in the sun, his wings became translucent like a crystal opal, glowing lime and mint.

Our eyes followed him to the sky. Like the sidewalks sometimes do, the bird disappeared. But when we released our gaze, we saw where we were: standing at the top of a medieval-looking staircase, now called Hollywood's Secret Stairs. These 861 steps had once served a city that was not in need of cars.

We had climbed a long way. When I beheld the view, I was transported to a charming European city like Éze, a sleepy hilltop haven on the Cote d'Azur or Anacapri, an almost mythical Italian town precariously sloped on the highest plateau above Capri.

What we saw made us choose to park ourselves still for a while: rolling hills, pouring light, cloudless day. And a faraway sea, stretching towards infinity.

There are times when I know where I'm heading, when I have a destination in mind. My yoga studio is 2.4 miles from home, which means it takes me one hour and eight minutes to walk (if my pace is comfortable).

On one of my walks to yoga, I noticed another person on foot. I wondered why he was walking, where he was from. If I stood out as much as he did. The sidewalk was small and he occupied most of it. He walked slightly slower than me, and I didn't want his pace to dictate mine. I walked on the grass to pass him.

I wasn't sure if he was calling me until he called again:

I stopped and turned around. A man, who seemed to be in his mid-thirties gaped at me.

"Is something wrong?" I said.

"No, it's just that no one passes me on my walks. No one walks, either."

"You must be hardcore to pass me like that. You've got a great gait."

I learned that my fellow pedestrian is a screenwriter from New York City. We talked about how miles are nothing in Northeast cities. How we don't care if other Los Angelinos think we're crazy. How walking empowers us.

I continued on to yoga and passed an elementary school at dismissal. The crossing guard shadowed me across a busy street. I tried to sprint ahead, but she kept up.

"You don't have to do that," I said smiling.

I had a half of a mile to go and saw a bearded man in a dark three-piece suit and a black fur hat. He appeared impervious to the L.A. sun. Hasidic Jews are my favorite pedestrians to pass not because I think they are odd or overdressed, but because I am enamored by their devotion to God and the Torah.

Like them, I suspect we are not of this world. Like them, I know we are not our bodies. But to outwardly live this out, especially in a city where fame, physical appearance, and all things earthly are everything, is something to note. To me, these walkers are far more interesting than the regular herds of tourists fascinated by Hollywood's Walk of Fame.

Every step is etched with the profundity of prayer. When Hasidic Jews walk from their homes to their neighborhood synagogue, they're not only making the physical journey to God, they're moving closer with their minds. They're decrypting the clues that God has given them. While they're on the edge of His inconceivable world, their human feet take simple steps on the Palm tree-lined streets of Los Angeles, one by one.

I'd like to think my steps are like theirs. That with every venture on foot, I'm nearing something that they're nearing, some world I might never understand, at least while standing on these two feet.

One day, on one of my walks, I will be courageous enough to ask a Hasid about his spiritual fearlessness. One day, I will ask how he can live as if he is not of this world, when our culture teaches that this is all there is. I have many more walks to go on, many more chances to find out.

And then there are the flowers. On what could have been a dreaded commute to a root canal, I've been overcome with the sweet scent of orange blossoms and rosemary. I've walked to the grocery store, my thoughts fraught with tasks I need to complete, only to be mesmerized by the transcendent night blooming jasmine and how its smell lingers until sunrise.

People in cars seem to become the vehicles they drive, solely focused on their next stop, consumed with where they're going, and how fast they're going to get there.

That's not to say your boyfriend can't pick a flower for you when you're in a car. When Alan and I sat in traffic on our way to Sherman Oaks, he reached his arm through the window to the camellia bush that sprouted on the median strip. He placed a pale, buttery yellow flower in my hand. The scent was gentle and the ruffles were soft on my skin.

On my most recent walk, I asked Alan about the purple flower trees that pop out against the darkening orange dusk. Their frilled flowers are scentless and produce a sticky sap.

"They're called jacarandas. They fall on cars and ruin the paint. Drivers hate that," he said.

"I love that," I said, smiling deviously, wishing that L.A. were more of a pedestrian town.

Then again, maybe I don't. I don't want everyone to know what I know. I don't want the sidewalks to become as crowded as the streets. Let driving be their thing. Let walking be mine. 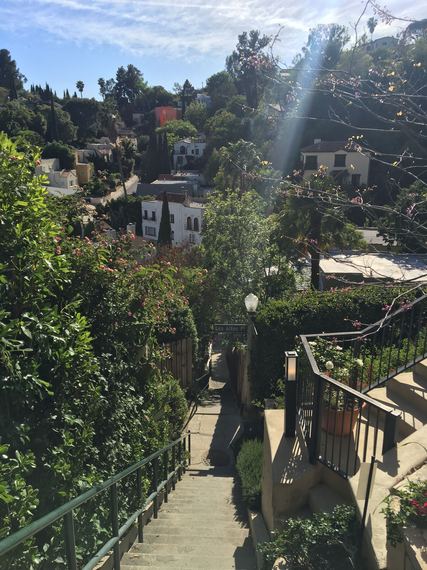