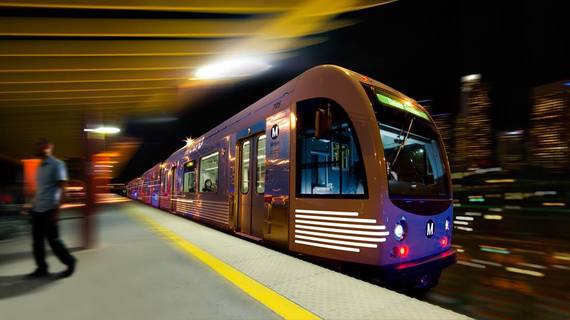 When the westbound Expo Line train glides into Santa Monica's Downtown station on May 20, the future of Los Angeles will have arrived. For the first time since the 1950s, that world-famous coastline will be back on the Southland's slowly-growing rail transit grid. With this and more exciting additions on the way, the way the world sees Los Angeles - and the way you visit the nation's second largest city - will likely change considerably over the next decade or so. Does this all sound a little bit dramatic? Good, because it's kind of a big deal.

With top destinations like a revitalized Hollywood, the newly Harry Potter-ified Universal Studios, Old Town Pasadena and an increasingly essential Downtown Los Angeles already connected to one another by train, all that was really missing was a good connection to the beach. (Because, really, what is Los Angeles, without the beach?) For years, those who weren't up for a lot of driving had to either choose to be near the ocean - typically a rather expensive proposition - or stay away entirely. It was a tough call that nobody should have to make. Happily, you'll never have to make it again.

Now, for just $1.75 including transfers, you can glide over, under and alongside the traffic-choked freeways, back and forth between the big city and beaches at will, any old time you choose. Ready to go? Here's how to experience the most Los Angeles possible in a day - all by riding the rails.

#1 Start with breakfast at Grand Central Market
In the dull decades when a handful of bedroom communities west of La Brea deluded themselves into thinking they had become the true center of the city, the actual downtown - where it all started for modern Los Angeles, centuries ago - was all but ignored by anyone who didn't have to work, shop or go on trial there. While even the best blocks of DTLA still bear their share of scars from years of neglect and bad planning, no place in Southern California is quite so hot right now. The historic Grand Central Market - about to enter its 100th year - is where to see the "new" downtown at its liveliest on a daily basis. From bargain-priced tacos to pricey artisanal pastrami sandwiches, the market offers a quick trip through the city's wildly diverse food scene, considered by many critics to be one of the best in the country right now. Lean on the bar at G&B and order a potent cortado (espresso with a dash of steamed milk), then join the line wrapping around Eggslut, an irreverent spot serving up gourmet breakfast sandwiches that have garnered truckloads of positive ink in the national press. For $9, they do a silky, coddled egg on top of delicate potato puree, poached in a glass jar and topped with fancy sea salt and fresh chives. They give you bread to mop it all up - it's one of the best breakfasts under $10 in town.
Get there Take the Red Line to Pershing Square, exit at 4th Street

#2 Go to the beach (obviously)
Even after years of doing battle with the 10 Freeway, locals will admit that there's still nothing quite so exhilarating as making the transition from the grit and relative heat of inland Los Angeles to those mild ocean breezes at the beach. Except now, someone else will do the driving and there will be no parking hassles when you get there. The ride takes about 35 minutes; just steps from the last stop on the train - down a reimagined, less car-centric Colorado Avenue - you'll find yourself face to face with the Santa Monica Pier and the 20-mile beach path that's great for either hiking or biking, your choice. (You can easily pick up some wheels at the nearest Breeze Bike Share station - the program offers a pay-as-you-go option for visitors.)
Get there Walk or take the Red Line one stop to 7th Street / Metro Center, transfer to the Expo Line to Downtown Santa Monica.

#3 Do lunch - and take a stroll - in the neighborhoods behind the beaches
On your way to the ocean - or on the way back - make sure to explore Santa Monica's recently-opened Tongva Park, designed by the group behind New York's High Line (you'll notice similar design quirks) and the city's pedestrian-friendly downtown, full of shopping and dining options. Want to get away from the crowds? Santa Monica's village-y Main Street district is just a few minutes on foot from the train - if you make it all the way down into Venice, detour along Rose Avenue for lunch at Gjusta, a high-test bakery, deli, café and beyond that's easily one of the most talked-about places to eat in Los Angeles right now. For more Venice cool, keep going on Main to Abbot Kinney Boulevard - from the first left turn on down to Venice Boulevard, you'll be walking past some of LA's top shops, cafes, galleries and restaurants. Falling over from exhaustion? Grab a Lyft or Uber car back to the train station for about $6.

#4 Right - time for some culture
Had enough ocean air? Hop the train once more and head east to one of the best new art museums in the United States. Home to the impressive art collection of local billionaire couple Eli and Edye Broad, the 120,000 square-foot museum - called The Broad - adds yet another piece of striking modern architecture to a block that already contains Frank Gehry's Disney Hall and Arata Isozaki's Museum of Contemporary Art. One of these lifetimes, a new subway station will open directly behind The Broad - for now, exit the train at Civic Center and climb through handsome Grand Park, sloping upward from the deco masterpiece that is Los Angeles City Hall. (As seen in a million movies, naturally.) Didn't already get your feet wet at the beach? There's a giant fountain where splashing around is encouraged.
Get there Expo Line train to 7th Street/Metro Center, transfer to the Red Line to Civic Center/Grand Park.

#5 Stop off where modern Los Angeles began
Settled by the Spanish in the 1700s, back when the Revolutionary War was raging on the other side of the continent, Los Angeles goes a lot further back than many of us remember. Just a crosswalk away from Union Station (the West Coast's busiest transit hub), you'll find some of the oldest city blocks in California. Wander through the city's longest-surviving residence, the Avila Adobe (an impressive colonial home built in 1818), hang out in the town square that feels more like Old Mexico than modern California, then drop in on evening mass (5:00 pm, Spanish only) in the old mission chapel - the current incarnation dates back to 1861. Far from being one of those open-air history museums you find scattered about the country, the district remains an essential part of life for many Angelenos.
Get there Red Line to Union Station.

#6 Go for cocktails in Los Feliz
Just like you're not seeing all of Los Angeles if you don't go to the beach, you're also missing out if you don't drop in on the East Side's vintage - and now, super cool - suburbs, linked together by Sunset Boulevard. The easiest way to make your appearance is to hop the Route 2 bus from Union Station that makes local stops all the way up Sunset. (Tip: If you're already riding the train, you can use the same handy TAP card to pay your fare.) This makes for an interesting ride through the commercial heart of the Echo Park, Silver Lake and Los Feliz neighborhoods - you'll pass a slew of great bars, restaurants, cafes and boutiques along the way. Would you rather stick with the train? That's fine, too - after all, one of the best bars on Sunset (and in the city) is only a short walk from the nearest Red Line station: the miniscule Tiki-Ti, a old-school dive renowned for their tropical drinks. Because why not a particularly potent Mai Tai, on your way to dinner? You're not driving, after all.
Get there Route 2 Metro bus from Union Station or the Red Line to Vermont/Sunset, walk three short blocks east on Sunset.

#7 Spend an evening in old Hollywood
To complete your best day ever, put on a nice shirt (this is LA, don't get crazy) and go eat dinner at Musso & Frank. Southern California's food scene may be tremendous and fast-growing, but if you're new to Los Angeles and short on time, a classic like Musso's is a must. Everybody who was anybody in Old Hollywood came through these doors at some point - you could spend hours reading the history, and should, before or after - but that's not the only reason to book a table: this is still a very good restaurant. Settle into a comfortable booth and allow the gentlemanly waiters - famous for their smart red jackets - to bring over a crisp, refreshing martini while you figure out what to order, which should probably be a giant steak, some type of potatoes (there are many to choose from) and creamed spinach. Not that you asked.
Get there Red Line to Hollywood & Highland, walk two blocks east on Hollywood Boulevard.

How to ride the trains in Los Angeles
Purchase a TAP card ($1) at any Metro rail station and top up with the necessary fares - day passes cost $7 for unlimited travel, otherwise it's $1.75 a ride including transfers. For more information, visit metro.net.

Need a flight? Check out the best fares available to Los Angeles.