The Los Zetas drug cartel is arguably Mexico's most violent and most feared gang. Recently, they took over the country's Coahuila region in the north, which shares a border with Texas. But the cartel wasn’t there to expand its drug or prostitution rings. Instead, the gang took over the dirty business of coal mining.

Coahuila is a coal-rich region, and as the AFP reports, the Zetas muscled in on that industry assured of the financial gains that would come with it. But coal is of particular significance to the Zetas beyond its monetary rewards; mining is free from the sticky consequence of prohibitive laws attached to other rackets like drug selling or sex trafficking.

The Zetas reportedly mine the coal through their own poorly-paid workers, or they buy it from small-time miners who are obliged to cooperate. The coal is then resold to a state-owned company, which is also suspected of being in cahoots with the Zetas, at a profit 30 times greater than the initial investment.

Estimates of the cartel’s profits from coal mining in Coahuila hover around $25 million a year.

According to the Los Angeles Times, the Zetas infiltration of Mexico’s Coahuila region was covert and swift. In under three years, the cartel was able to control every aspect of commerce, from politics to small businesses, all under the threat of extreme violence for anyone who didn’t cooperate.

Though some report the mining operation has been an open secret in the region for some time, the Zetas involvement wasn’t widely known outside of the country until October when during a press conference, the former Coahuila governor Humberto Moreira told reporters that a recently killed Zetas leader was running the coal mining industry before his death.

In his interview with Al-Jazeera, Moreira says the practice is exceeded even drug running in terms of its earning power.

The drug cartel’s involvement in an industry rife with human and environmental abuse lends itself to some obvious concerns. Al-Jazeera reports that the Coahuila mines are already noteworthy for being particularly unsafe, including one accident in 2006 where 65 people died. But tunnel collapses occur with some frequency there, as do methane gas explosions. Mexican human rights officials report that since the Zetas’ infiltration, miners are no longer allowed to utilize what little safety protocols they previously had access to, making the environment all the more hazardous.

But as Moreira explained for workers, it's not a matter of choice, "Here those in poverty are forced to seek work where they can..."

No matter how careful businesses are, just the act of coal mining produces a scourge of environmental abuses. According to Greenpeace, the proliferation of metals and ash into the surrounding skies pose serious health risks to nearby residents. But the process also causes a enormous deposits of greenhouse gas emissions into the atmosphere, excessive water waste and heightened toxicity from large chunks of inner earth being hollowed out and dumped onto its surface. In the hands of inidviduals known for their brutality and utter lawlessness, the power to further pollute the earth is all the more overhwhelming. And for the state of Texas in particular, it's all happening just across the border.

Does cartel involvement in the industry make you more concerned about the industry's environmental effects? Let us know in the Comments. 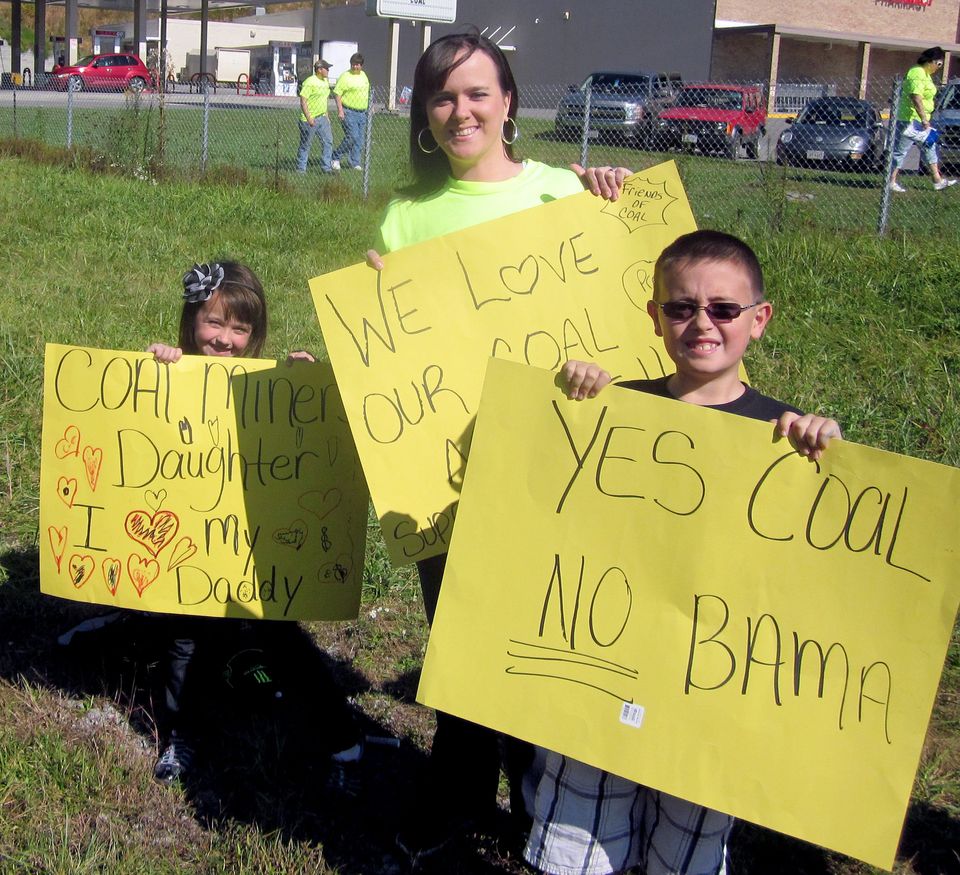 1 / 8
In a Saturday Oct. 13, 2012 photo, Amanda McCracken, of Big Stone Gap, stands with her children, Kaylee, 6, and Pryston, 8, at Saturday's United for Coal demonstration in support of her husband and their father, who is a coal miner. Only a few generations ago, coal miners were literally at war with their employers, spilling and shedding blood on West Virginia's Blair Mountain in a historic battle for union representation and fair treatment. Today, their descendants are allies in a carefully choreographed rhetorical war playing out across eastern Kentucky, southwestern Virginia and all of West Virginia. It's fueled by a single, unrelenting message that they now face a common enemy _ the federal government _ that has decided that coal is no longer king, or even noble. (AP Photo/Bristol Herald Courier, Allie Robinson)
AP